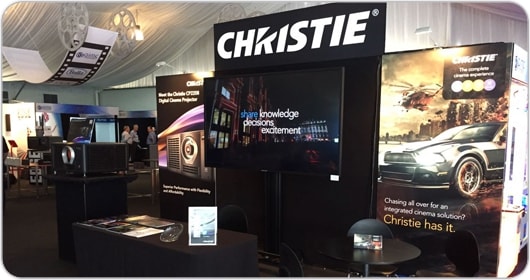 “Christie has continued to place strong emphasis on the Australian and New Zealand cinema industry, and I’m pleased to note that the AIMC is an ideal platform to showcase our latest technologies, said Dr. Don Shaw, Senior Director, Asia Sales, Cinema, Christie. “With our unique wealth of knowledge and experience in cinema for more than half a century, our xenon and RGB pure laser cinema solutions are well-placed to meet the needs of exhibitors and postproduction facilities around the world.”

Dale Miller, Executive Vice President, Cinema, Christie, added, “Christie is dedicated to improving the audience experience with our sustained commitment to shape the future of exhibition, and this is exemplified with the introduction of our RealLaser™ cinema projectors, which have emerged as an industry game-changer. Coupled with our legacy of cinema innovations, we’ve witnessed numerous exhibitors, studios, film festivals, content creators and filmmakers around the world choose Christie for projection, audio, lobby engagements and services.”

The main highlights include movie screenings by Event Cinemas using Christie cinema projectors, and live demonstrations of the cinema industry’s first affordable RGB pure laser projector – the Christie CP4325-RGB – at Gold Class Cinema 1 and in Cinema 6 throughout the four-day event. Launched in late 2017, the CP4325-RGB is the first model in Christie’s RealLaser family that offers all the advantages of a high-performance laser projector in a compact ‘all-in-one’ form factor. Using discrete, dedicated red, green and blue lasers, Christie RealLaser delivers an unequalled, authentic and immersive cinema experience for the mainstream exhibition market in a cost-effective offering.

As well, delegates can check out the 2K version of Christie’s family of RealLaser cinema projectors – the CP2315-RGB pure laser projector – on static display at booth 9 during the AIMC trade show, held in the cinema foyer from July 30 to August 2. Similar to its 4K-resolution sibling, the CP2315-RGB offers film makers a rich color palette, approaching Rec. 2020 and over 30,000 hours of theatre operation. Compared to competitive solutions, Christie RealLaser technology will ensure superior and more consistent brightness levels according to DCI standards throughout the entire lifetime of the projector.

Christie RGB pure laser installations in Australia and New Zealand
Christie illumination technologies, ranging from lowest total cost of ownership Xenon models to state-of-the-art, yet affordable, RGB laser illumination products, continue to be projection solutions of choice by discerning exhibitors worldwide. In Australia, several CP4325-RGB laser systems have recently been installed at the Event Cinemas Pacific Fair cinema in advance of AIMC. HOYTS Cinemas has also installed a number of Christie laser projectors, starting with a CP42LH system at their Chadstone site in late 2016 and now at their Docklands site in Melbourne, which will soon become the first cinema complex in Australia to be fully equipped with Christie’s RGB pure laser projectors. On the post production side of things, Sydney-based Definition Films has also chosen a Christie RGB pure laser projection system for their work as well as Department of Post in Auckland, New Zealand.

Christie-ICA Network Operations Centre
Besides offering a complete range of cutting-edge cinema and lobby solutions, Christie has also partnered with the Independent Cinemas Australia in support of independent exhibitors through the Christie-ICA Network Operations Centre (NOC) set up in 2012. The Christie-ICA NOC provides 24/7/365 monitoring of hardware such as projectors, players, IMBs, theatre management systems and networks that connect all these components, and offers round-the-clock telephone support for all technical issues, including day-to-day operational questions. NOC operators are fully connected to the equipment on site to quickly fix problems remotely with log files and thus help to free up employees at the cinema to deal with their customers during the delay.

About AIMC
Hosted annually by NACO (National Association of Cinema Operators-Australasia), the Australian International Movie Convention (AIMC) remains the only event on the Australian Film Industry calendar to provide opportunities to network with local and international colleagues from Cinema Exhibition, Distribution, Production, and Technology & Cinema Equipment Suppliers under one roof. Attracting delegates from Australia, New Zealand, Asia, the US and Europe, AIMC provides an invaluable opportunity to preview upcoming product from major and independent studios; learn about the latest local and international trends from guest presenters and panel sessions; discuss latest technologies and cinema fit-outs with trade exhibitors; and network with colleagues and senior industry executives. Visit www.movieconvention.com.au.

About Christie
Christie Digital Systems USA, Inc. is a global visual technologies company and is a wholly-owned subsidiary of Ushio, Inc., Japan, (JP:6925). Consistently setting the standards by being the first to market some of the world’s most advanced projectors and complete system displays, Christie is recognized as one of the most innovative visual technology companies in the world. From retail displays to Hollywood, mission critical command centers to classrooms and training simulators, Christie display solutions and projectors capture the attention of audiences around the world with dynamic and stunning images, accompanied by awe-inspiring sound. Visit www.christiedigital.com.