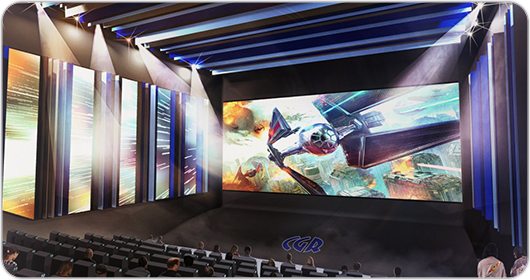 Cinemagoers in France will soon be able to enjoy movies in the best colours and highest brightness and contrast, thanks to CGR Cinemas, a nationwide chain which is upgrading projection in selected outlets with the Solaria CP42LH RGB laser projector from Christie.  Installed and supported by Cine Digital Service, the projectors will be part of CGR’s new Premium Room concept, which is to be unveiled at selected cinemas across France. Openings begin in December and this latest initiative further cements the close working relationship that Christie has enjoyed with CGR since a huge digital cinema roll out began in 2007.

The movie experience itself is the main attraction,” says Jocelyn Bouyssy, the group’s CEO who has championed Premium Concept. The audience-friendly experience starts from easy booking, no queues, and welcoming refreshments to a walk down subtly-lit corridors taking the customer to an architect-designed auditorium where special lighting behind fabric walls will start to create an atmosphere as the audience sits to see the film.  “The lighting will be tailored to get people in the mood for each specific film,” explains Bouyssy. “It could be bright lights for a rock concert or blue for a film themed around a story on the open sea.”

What is perhaps most impressive about CGR’s initiative is their intention to bring the best cinema experiences to everyone. “Our Premium Concept will not be in our larger screens but auditoria of about 200, so people can really relax in spacious seating with a good view. I don’t want people to be excluded from the best cinema experiences, which can be the case; anyone should also be able to afford to see and hear cinema at its best so we intend to charge no more than €3 extra even on discounted tickets such as student rates. Christie was the natural choice for CGR to support us in our new deployment, as the company’s projection technology has been at the heart of the digital cinema revolution for the last decade,” confirms Bouyssy.

Christie has continued to spearhead technical advancements globally, and in the process clocked up fifteen laser cinema firsts. Pascal Gervais, Regional Sales Director, Christie Benelux, comments: “It’s gratifying that CGR has once again shown how important Christie projection is to their offering. We’ve worked together for many years to deliver the best Cinema experience possible and this latest development, which sees the deployment of our latest RGB laser projection, raises the bar significantly in terms of viewing experience and sets a new blueprint for the sector.”

CGR is the first cinema chain in EMEA to deploy Christie CP42LH and laser modules that generate white light from multiple combinations of RGB primary colour wavelengths to counteract speckle and offer a spectacular viewing experience on silver screens. “We were impressed by the stunning clarity of images and amazing brightness of the Christie system. It’s a 57,200-lumen laser projector which gives incredible brightness and the technology using 9 primary colours gives beautiful image quality. We will be using a new format, which manages and increases both light and contrast and we knew this projector head was perfect to give our Premium Concept the difference we were looking for in order to bring the best in 2D or in 3D, without compromise”, said Sébastien Bruel, Technical Director CGR Cinema.

CGR Cinema will source the CP42LH RGB laser projectors from Christie France, and the units will be installed and supported by Cine Digital Service’s nationwide network of specialist installers. The Christie CP42LH delivers higher brightness, a wider colour gamut, higher contrast, improved dynamic range and longer operational life, compared to the existing lamp-based systems. Christie CP42LH benefits from Enhanced Wavelength Diversification (EWD), which, by using Christie’s diverse combination of modular laser systems, significantly reduces the impact of speckle on silver screens. In this way, EWD ensures exhibitors can continue to use their existing silver screens and passive 3D systems. This reduces the time and cost associated with a projection system retrofit and allows operators to use low-cost 3D polarization glasses, which translates into further cost savings.

During the relationship with CGR, Christie has led the digital cinema revolution and spearheaded technical advancements globally with at least 15 laser cinema firsts. The company’s DCI-compliant video and audio cinema technologies are installed in over 40 percent of the world’s cinema theatres. In fact, Christie is the only DCI-compliant manufacturer whose heritage in cinema stretches back to 35mm film and the birth of the international movie industry.

Today Christie offers a broad range of price and performance solutions for cinema applications; from boutique cinemas to premium large format venues, bolstered by the development of its modular RGB laser illumination system  – Christie Freedom – which is, the world’s brightest at up to 120,000 lumens on the 6P system. Christie has been recognized by the Academy of Motions Picture Arts & Sciences and working today with directors like James Cameron, Peter Jackson and Ang Lee to advance story-telling and the cinema experience.

Alongside advances in 2K, 4K, HFR and now HDR, Christie champions rising performance standards in cinema; in particular high-brightness and 3D cinema. Working with both studios and partners Ushio & Necsel (cinema illumination specialists) the company is an advocate for >14ft lamberts brightness standard for 3D cinema. Christie has supported this position and invested in the development of increasingly bright projection systems using xenon, laser phosphor and RGB laser (3P, 6P and EWD systems).

About Christie
Christie Digital Systems USA, Inc. is a global visual and audio technologies company and is a wholly-owned subsidiary of Ushio Inc., Japan, (JP:6925). Consistently setting the standards by being the first to market some of the world’s most advanced projectors and complete system displays, Christie is recognized as one of the most innovative visual technology companies in the world. From retail displays to Hollywood, mission critical command centers to classrooms and training simulators, Christie display solutions and projectors capture the attention of audiences around the world with dynamic and stunning images. Visit www.christieEMEA.com

About CGR Cinémas:
Founded in 1974 by George Raymond, CGR Cinemas is a French exhibition group based in La Rochelle, France. The group, initially based in the South-West of France, took advantage of the creation of multiplexes and extended over the entire French territory.  Today, CGR Cinemas is the third largest exhibition chain with 424 screens on 34 multiplexes and 7 cinemas and the first independent circuit in France with more than 20 million admissions per year. It was the first European network to contract the VFP model in 2007 and become 100% digital.