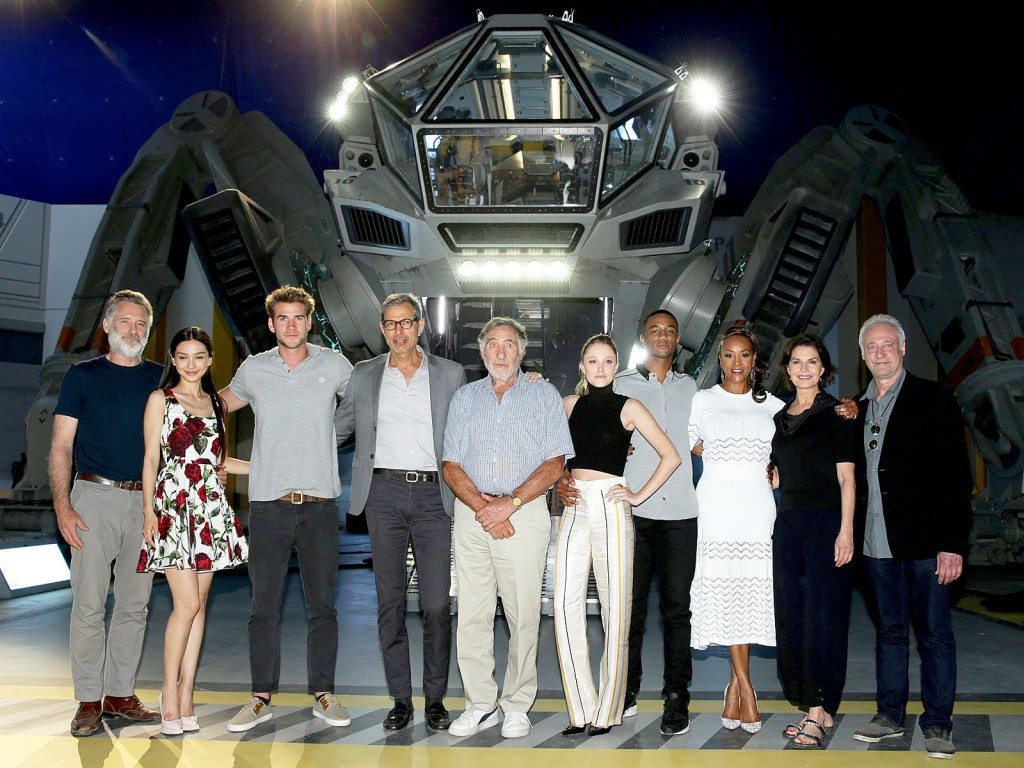 The cast of “Independence Day: Resurgence,” Liam Hemsworth, Jeff Goldblum, Bill Pullman, Maika Monroe, Jessie Usher, Sela Ward, Vivica A. Fox and Brent Spiner, will receive the “CinemaCon Ensemble of the Universe Award,” it was announced today by Mitch Neuhauser, Managing Director of CinemaCon. CinemaCon, the official convention of The National Association of Theatre Owners (NATO) will be held April 11-14, 2016 at Caesars Palace in Las Vegas. The cast of “Independence Day: Resurgence” will be presented with this special honor at the “CinemaCon Big Screen Achievement Awards” ceremony taking place on the evening of Thursday, April 14, at The Colosseum at Caesars Palace, hosted by the Coca-Cola Company, the official presenting sponsor of CinemaCon.

“With a talented cast of familiar faces and exciting newcomers ‘Independence Day: Resurgence’ is sure to thrill audiences around the world when the next chapter of this blockbuster film hits movie theaters this summer,” noted Neuhauser. “We could not be more excited than to honor the cast with this year’s ‘CinemaCon Ensemble of the Universe Award.’”

“Independence Day: Resurgence” will be released via 20th Century Fox on June 24, 2016. After “Independence Day” redefined the event movie genre, the next epic chapter delivers global spectacle on an unimaginable scale. Using recovered alien technology, the nations of Earth have collaborated on an immense defense program to protect the planet. But nothing can prepare us for the aliens’ advanced and unprecedented force. Only the ingenuity of a few brave men and women can bring our world back from the brink of extinction.

Liam Hemsworth most recently appeared in the box office hit “The Hunger Games: Mockingjay 2.” He will be seen this summer in Roland Emmerich’s “Independence Day: Resurgence,” starring opposite Jeff Goldblum and Bill Pullman. He’s completed production on the revenge western thriller “By Way of Helena,” starring opposite Woody Harrelson and the comedy-drama “The Dressmaker,” starring opposite Kate Winslet.

In his over 40 year career on the big and small screen Emmy and Academy Award-nominated actor Jeff Goldblum has appeared in such films as “The Grand Budapest Hotel,” “Le Week-End,” “Adam Resurrected,” “Nashville,” “The Life Aquatic,” “Buckaroo Banzai,” “Igby Goes Down,” “Pittsburgh,” “Jurassic Park,” “Independence Day,” “Jurassic Park: The Lost World,” “Powder,” “Mr. Frost,” “Annie Hall,” “The Big Chill,” “Silverado,” “The Fly,” “Deep Cover,” “The Right Stuff,” “Between The Lines,” “Invasion of the Body Snatchers,” “Into the Night,” “Next Stop Greenwich Village,” and “The Tall Guy.” Television credits include “Will & Grace” and “Portlandia.” He recently appeared in The Lincoln Center Theatre’s production of “Domesticated,” “Seminar” and “The Pillowman” on Broadway, as well as “The Prisoner of Second Avenue” in London’s West End and “Speed The Plow” at The Old Vic Theatre. Goldblum most recently completed filming “Independence Day: Resurgence.”

With a career that started in the New York Theater in 1983 Bill Pullman has appeared in over seventy features and several television series.  His movie career includes such memorable films as “Spaceballs,” “The Accidental Tourist,” “Sleepless in Seattle,” “While You Were Sleeping,” “Independence Day,” “Wyatt Earp,” “The Grudge,” and television mini-series/series “Revelations,” “Torchwood,” and “1600 Penn,” “LBJ,” and “Brothers-in-Law.” In addition to “Independence Day: Resurgence,” he will also soon begin production on “Battle of the Sexes,” and “Trouble.”

After making her feature film debut in “At Any Price,” Maika Monroe has gone on to star in such films as “Labor Day,” “The Fifth Wave,” “It Follows,” and “The Guest.” She can be seen in the upcoming films “Hot Summer Nights” alongside Emory Cohen, “The Scent of Rain and Lighting” opposite Maggie Grace and “Bokeh” alongside Matt O’Leary. In addition to “Independence Day: Resurgence,” she is also currently in production on “The Tribes of Palos Verdes,” alongside Jennifer Garner and is set to star opposite Liam Neeson, Diane Lane and Jason Bateman in “Felt.”

With a career that started with guest roles on such series as “Without A Trace,” “Numbers,” “The Mentalist,” “Criminal Minds,” “Lincoln Heights,” “Hannah Montana,” and “Summer Camp,” Jessie Usher’s big break came when he was cast in “Level Up,” on the Cartoon Network. He followed that up with a starring role on Starz TV’s “Survivors Remorse.” Usher is currently in production on the show’s 3rd season where he stars as a basketball phenomenon who signs a multimillion dollar NBA contract in his feature film debut “When the Game Stands Tall.” In addition to “Independence Day: Resurgence” Usher can be seen later this year in “The Meyers Christmas.”

Emmy and Golden Globe winning actress Sela Ward first began her acting career after a chance meeting with Blake Edwards who went on to cast her in his film “A Man Who Loved Women.” Other feature credits include “The Day After Tomorrow,” “Gone Girl,” “The Guardian” and “The Fugitive.” On the small screen, Ward will star opposite Nick Nolte in the upcoming EPIX series “Graves.” She has previously starred on “Sisters,” “Once and Again,” “CSI: NY,” “House,” and the made for television movie “Almost Golden: The Jessica Savitch Story.” Ward most recently completed filming “Independence Day: Resurgence.”

With an extensive body of work that includes film, television and stage credits Vivica A. Fox first appeared on soap operas such as “The Young and the Restless,” before receiving her big break being cast in “Independence Day.” She went on to star in such films as “Soul Food,” “Set It Off,” “Booty Call,” “Why Do Fools Fall In Love,” “Kingdom Come,” “Boat Trip,” “Ella Enchanted,”  “Batman and Robin,” and “Kill Bill, Volumes 1 & 2.” On the small screen she has starred in a number of television series including “Out All Night,” “Missing,” “Getting Personal,” and “Curb Your Enthusiasm,” as well as many guest spots on series such as “Living Single,” “Martin,” “Beverly Hills 90210,” “The Fresh Prince of Bel Air,”  and “Empire.” In addition to “Independence Day: Resurgence,” Fox can be seen later this year in “Illicit” and “Chocolate City: Vegas.”

Brent Spiner is best known for his portrayal of the android Data for all seven seasons of the television series “Star Trek: The Next Generation” as well as in four subsequent “Star Trek” feature films. Spiner has also appeared in “The Aviator,” “Phenomenon,” “Out to Sea,” “Material Girls” and “Master of Disguise.”  Additional film credits include “Superhero Movie;” “Dude, Where’s My Car?” and his performance as the voice of Conan O’Brien in “Southpark: Bigger, Longer, Uncut.”  On television, Spiner first starred opposite Halle Berry in the award-winning HBO biopic “Introducing Dorothy Dandridge,” followed by the drama “The Ponder Heart.” He also starred as the villainous Stromboli in the ABC musical “Geppetto.”  We will see him next in “Independence Day: Resurgence” as he reprises his role of Dr. Brackish Okun from the original “Independence Day.”