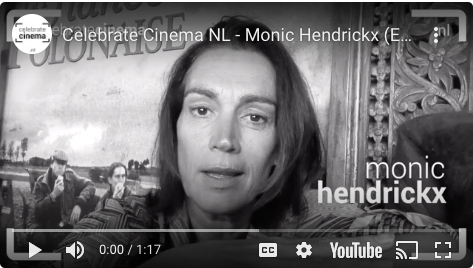 Everybody who loves movies longs for the moment that movie theaters worldwide will re-open again. Because everybody knows there is no better place to experience a movie than in a cinema with friends and family. A new online campaign with roots in The Netherlands wants to celebrate cinema in a time that the Coronavirus makes us stay at home.

Holland Film Nieuws, the Dutch trade magazine for cinemas, came up with a campaign that celebrates the memories of going to the movies by using the hashtag #celebratecinema. Well-known actresses, actors and directors are asked to share their personal memories. The current and upcoming videos will be shared via social media and the special website www.celebratecinema.org.

The Dutch actress Monic Hendrickx (“Penoza: The Final Chapter”) kicks off the campaign by telling about her childhood memories of going to the movies. She also addresses the audience to come back to the movie theaters as soon as possible: https://www.youtube.com/watch?v=hDQoT3PgGNY (English subtitles available)

By celebrating cinema memories, the audience will hopefully become aware of the power of movies and cinemas. So that it will return to see the movies on the big screen as soon as possible.

Jeroen Huijsdens, Editor in Chief of Holland Film Nieuws: “We wanted to contribute something positive and inspiring to the situation our industry is in right now. There does not seem to be a better time to become aware of all the beautiful memories cinema gave us than in the year that cinema celebrates its 125th anniversary. That should be celebrated. Now more than ever!”

The cinema industry is going through a tough time. Cinemas are closed, movies are postponed, and film production has come to a complete stand still. For cinemas it is not the first time they had to meet a major challenge. They needed to react to the arrival of television, the video recorder and illegal downloads in the internet age. Every one of these challenges had a great impact on cinema attendance. But every time cinema has proven its enormous strength.

The campaign offers an opportunity for cinema exhibitors, movie distributors, producers, suppliers and everyone involved in the movie industry nationally and internationally to participate in spreading the positive message and celebrate cinema.

Mike Thomson, Director at The Big Picture says, “The #CJCinemaSummit is the ideal place to #CelebrateCinema in its 125th year. We look forward to virtually meeting with all industry stakeholders and friends each week, to keep you up to date on this initiative as best we can. We really look forward to seeing other countries across the world take this great initiative from the Netherlands, forward.”

The website www.celebratecinema.org is the central place where cinema exhibitors, movie distributors, producers, suppliers and everyone else involved in cinema, can get information. It is also the place where they can pick up a digital toolbox. In it are visual elements which can be used and transformed locally. But key is the usage of the powerful hashtag #celebratecinema.