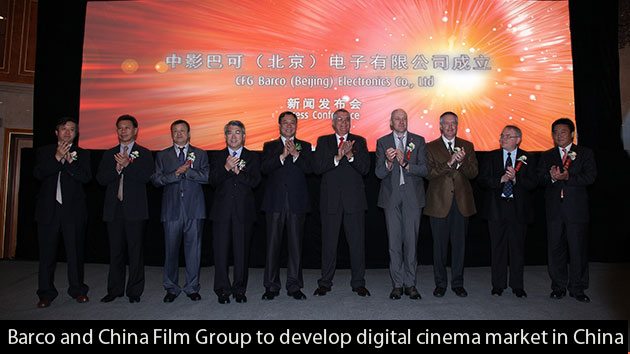 Barco, the global leader in cinema technology, announced today that it has reached an agreement with China Film Co., Ltd. (“CFG or China Film Group”) to change the ownership structure of its BarcoCFG joint venture for the Chinese cinema market in conjunction with the strategic joint venture with CFG, Appotronics and CITICPE announced today (For reference see announcement 4 December, “Barco joins forces with strategic partners to advance delivery of dedicated and new cinema solutions and services”.)

Under the terms of the agreement Barco will sell 9% of its shares in the BarcoCFG joint venture to CFG in exchange for 175 million RMB, thereby reducing its stake in the joint venture from 58% to 49%. Barco will continue to act as exclusive OEM partner for all projection and image processing technologies of the joint venture.

The joint venture between Barco and CFG was established in 2011 to develop China’s digital cinema market through localized commercial operations, business development and assembly of digital cinema products and services.

“The combination of Barco’s technology and China Film Group’s expertise and market access has made meaningful and successful contributions to the development of digital cinema market in China over the past six years, resulting in a current market share of over 50% for Barco Cinema projectors.” said Jan De Witte, CEO of Barco.

“As the market matures in the larger cities and sales begin to shift to smaller tier 3 and 4 cities, we have agreed that China Film Group is best positioned to lead this next phase of development of the Chinese cinema market. As a 49% shareholder, Barco remains fully committed to the joint venture as a technology partner and provider.”

The new ownership structure is expected to take effect by mid 2018 pending customary regulatory approvals after which Barco, as a result of the change in control, will report financial results of the BarcoCFG joint venture under the equity method. Although the impact of the change in ownership change on Barco’s net earnings will not be material, Barco’s net sales and EBITDA will not be comparable with prior periods. Once the new ownership structure is established Barco plans to provide pro-forma financial statements for the first half of 2018.

About Barco
Barco designs technology to enable bright outcomes around the world. Seeing beyond the image, we develop sight, sound, and sharing solutions to help you work together, share insights, and wow audiences. Our focus is on three core markets: Enterprise (from meeting and control rooms to corporate spaces), Healthcare (from the radiology department to the operating room), and Entertainment (from movie theaters to live events and attractions). In 2016, we realized sales of 1.102 billion euro. We have a team of 3,500 employees, located in 90 countries, whose passion for technology is captured in 400 granted patents.