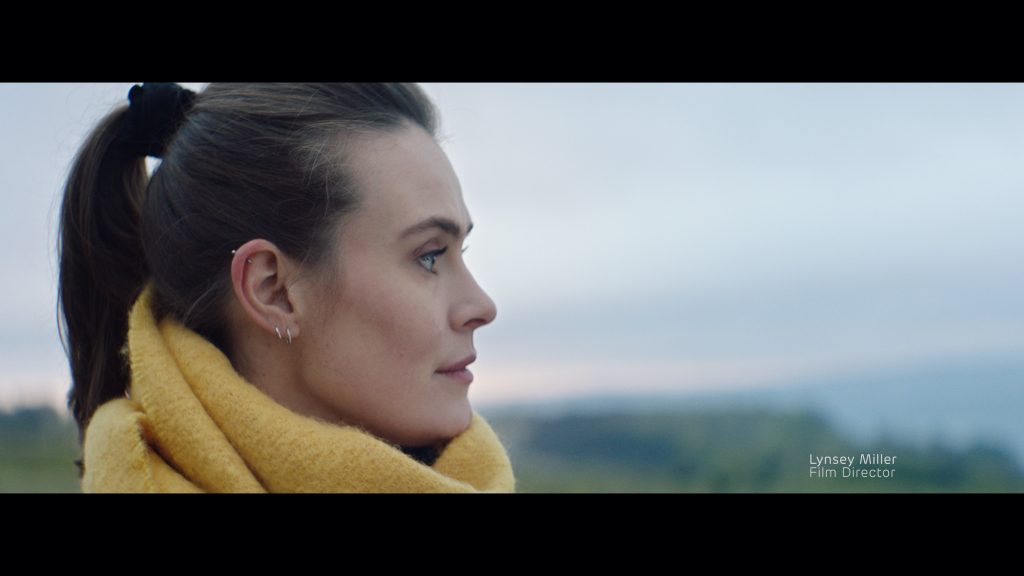 In a step away from her current role directing the major new three-part drama about “Anne Boleyn” (2021), EE Film Stories, Miller provides a glimpse into production life in the “new normal”. The short film highlights how technology advancements, such as 4G and 5G on EE, are keeping the industry connected through change, seeing Scottish-born Lynsey Miller connect with, cast and direct, all over her handset.

It comes as earlier this year, the worldwide filming industry was brought to a standstill due to the global pandemic with the resulting quarantine, social distancing rules, and travel restrictions resulting in production becoming nearly impossible to continue. However, thanks to an increased roll-out of technology, connectivity has made it possible to deliver with only a skeleton team on the ground, while the director can be remote, or even on a different continent.

EE Film Stories opens at a film base unit in the Yorkshire countryside, before we see Miller travel in an Audi Q7 to the set of her latest project, “Anne Boleyn”, coming to the UK on Channel 5 in 2021, at the famed Bolton Castle. On the road, Miller catches-up with actor James Cosmo (“Game of Thrones” and “His Dark Materials”), of the release of his long-awaited film “The Glass Man”, who jovially says he’s glad to see Miller “Back into production again” as Miller chimes back that she’s “excited to get going”. As we near her destination, we hear Miller say, “Being able to keep in touch with my team, no matter where I am, is so important to my role”, as a shot of medieval castle comes into view.

Sat outside the historic 14th century landmark, Miller is seen again on her mobile, this time running lines with actress Katie Leung (“The Nest”, “Roadkill”), who is based in London. Miller can be heard saying “Video castings are now part of my new normal”, before we see Leung gazing down the phone camera, delivering her final line, “And they lived happily ever after”.

As Miller makes her way through the iconic building, we hear her say “Technology has definitely made my life simpler. I can virtually be in two places at once.”

She continues “And now, I can even remotely direct shoots, if I can’t be there in person”. The shot opens in a new location, where we see an actor and socially distanced skeleton crew are being verbally directed by Miller via phone. It is then that actor Glen Wallace (“The Secret”, “Marcella”) appears over video call where he discusses the next take with Miller who stands miles away atop the turrets of Bolton Castle.

As the camera pans away, and the film comes to a close, we hear Miller reflect that “Escapism is essential. Now more than ever and it’s been great that we’ve been able to adapt and keep doing what we love”.

Lynsey Miller, BAFTA Scotland Award Nominated Director, says of the film: “One of the key requirements of a director is the ability to communicate. You have a crew full of people relying on you to relay decisions and formulate plans. Technology is absolutely vital in the continuing conversation between myself, and the team of brilliant professionals that make a piece of tv or film happen. It is now possible to deliver so much of the important pre-production and post-production process remotely – digital recces, online castings and read-throughs, reviewing large media files… The list goes on! Technology has enabled us to adapt and keep doing what we love.”

Jude MacLaverty, Director at BAFTA Scotland, adds, “Our screen industries have all shown incredible creativity and ingenuity this year, and have adapted to this ‘new normal’ by embracing technology in new and exciting ways. Despite the challenges faced, technology has enabled the industry to continue to deliver high quality content that educates, entertains and keeps us connected, which is what we all need, now more than ever.” James Cosmo, actor, adds, “In all of my years in the industry, I’ve seen fads and trends come and go. But in the face of great hardship, it has been truly wonderful seeing how technology has connected people to ensure the show does go on. You can now cast a whole film without meeting someone face to face. A director can watch a scene play out and critique it live from across the globe.  We will continue to create in whatever way we can, and as long as it is making its way to audiences, then the magic of Film and TV continues.”

Katie Leung, actor, adds, “If you’d told me five years ago that I’d be doing meetings from my living room, I’d never have believed you. Bad connection is really the last thing anyone needs in these situations. Once that’s sorted though, there really isn’t too much difference as the passion and commitment remains. I think I might even prefer it this way.”

Glen Wallace, actor, adds, “The way that production has responded and innovated during this challenging period has been astounding. Staying connected has never been more important and whilst I absolutely miss the buzz of being in the room and being on set, from my mobile phone I have been able to continue having meetings and auditions, and weirdly feel more involved with access to some world-class webinars and workshops, many of which have been organised by BAFTA. It has meant that I can keep doing what I love, and, more importantly, ensure that viewers get to see what they love.”

Pete Jeavons, Marketing Communications Director at BT and EE comments, “During such a tumultuous year, it’s been encouraging to hear stories, like Lynsey’s, to understand how industries, like film and TV, have been able to adapt and evolve. As we continue to bring the latest technology to even more people, we are confident that 5G will play a huge role in helping re-imagine what is possible with mobile technology. Behind the camera, we are proud to play our role in ensuring the show goes on, for this industry and beyond.”

The production was supported by Robert Booth, a locally based sound recordist, and member of BFI NETWORK x BAFTA Crew; the professional development programme that supports the next generation of film, games and television talent with insights from BAFTA-winners and -nominees, a community of peers and future collaborators, and mentoring.