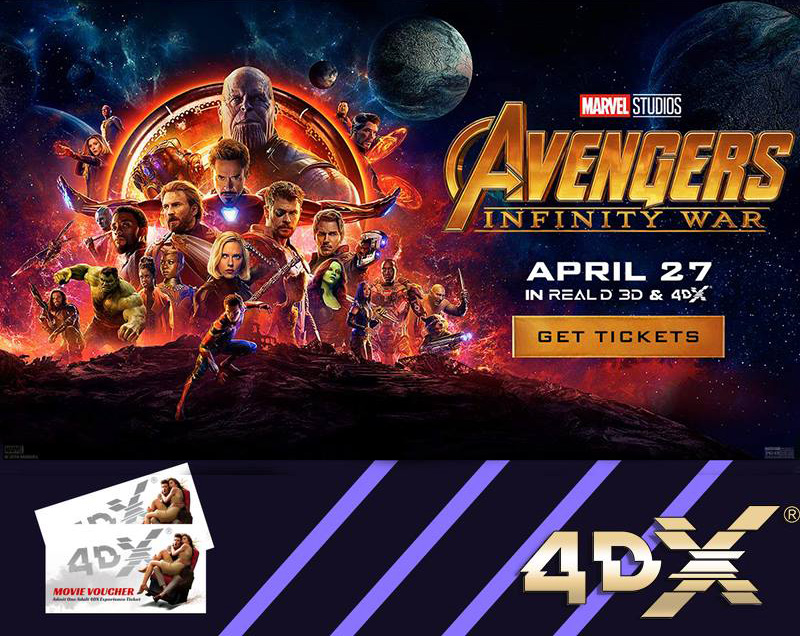 Released in the 4DX format that features seat movements, vibrations and environmental effects tailored for each key aspect of the film, “Avengers: Infinity War” is the first 4DX title in history to reach the 2 million attendee mark and the fourth 4DX title released in the past six months to pass 1 million – including Marvel Studios’ “Black Panther” and Lucasfilm’s “Star Wars: The Last Jedi.”

“Avengers: Infinity War” follows a string of successful Marvel Studios films released in the innovative format. These recent blockbusters include “Black Panther,” “Avengers: Age of Ultron” and “Captain America: Civil War,” which all topped 1 million attendees at the global box office and rank among the top 10 films in 4DX of all time.

“With their spectacular action sequences, these films are perfectly suited to be converted into 4DX. We are excited each time we team with Marvel Studios and look forward to even more moviegoers around the world being able to experience ‘Avengers: Infinity War’ in the fastest-growing premium movie format – whether fans are seeing the film for the first time or going back to the theatre for repeat viewings,” added Byung-Hwan Choi, CEO of CJ 4DPLEX.

About Marvel Studios’ Avengers: Infinity War
An unprecedented cinematic journey ten years in the making and spanning the entire Marvel Cinematic Universe, Marvel Studios’ “Avengers: Infinity War” brings to the screen the ultimate, deadliest showdown of all time. The Avengers and their Super Hero allies must be willing to sacrifice all in an attempt to defeat the powerful Thanos before his blitz of devastation and ruin puts an end to the universe.

About CJ 4DPLEX
CJ 4DPLEX is the world’s first 4D cinema company, headquartered in Seoul with international offices in Los Angeles and Beijing. The company created 4DX, the first and leading 4D cinema technology for feature films, providing moviegoers with an immersive cinematic experience that utilizes all five senses, allowing the audience to connect with movies through motion, vibration, water, wind, snow, lightning, scents, and other special effects that enhance the visuals on-screen. CJ 4DPLEX brings 4DX auditoriums to exhibition partners along with 4DX codes for both major Hollywood blockbusters and local titles. Each auditorium incorporates motion-based seating synchronized with more than 20 different effects and optimized by a team of skilled editors, maximizing the feeling of immersion within the movie, beyond the limits of audio and video. Since 2009, more than 520 Hollywood and local titles have been screened in 4DX. As of May 2018, more than 62,800 4DX seats operate in 524 auditoriums spanning 59 countries.