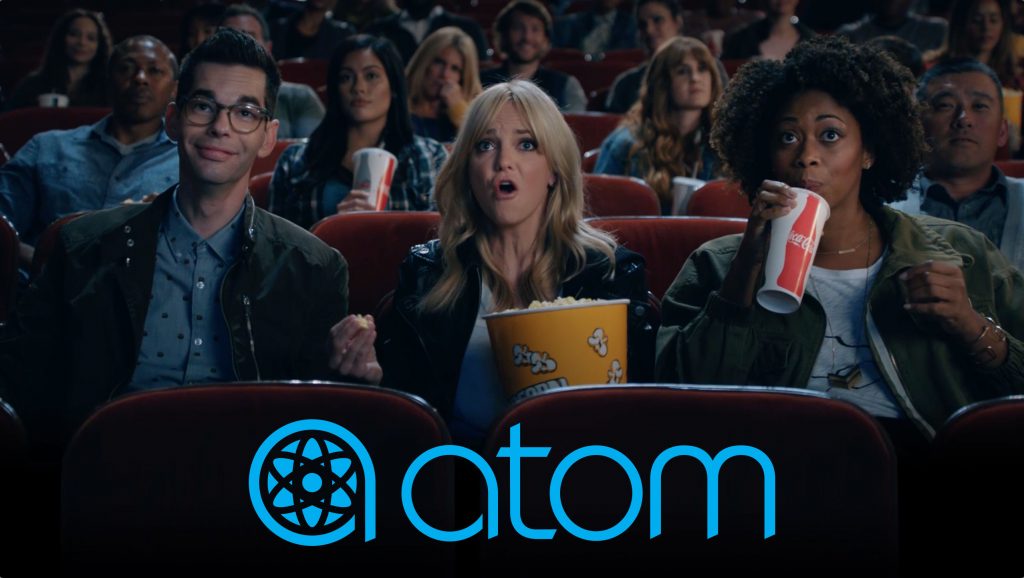 Designed to appeal broadly to all audiences, the campaign positions Atom as a fan’s passport to an elevated experience that can only be delivered by the Atom app: social sharing, flexible advance purchasing of movie tickets and concessions, and digital ticketing.

In the commercial titled “Anna’s Night Out,” movie fanatic Faris instigates a night at the movies with Atom.  Using the app, she picks the movie, invites her friends, selects preferred seats and pre-orders a tub of popcorn, all while parodying memorable movie moments at each step of the experience. As the story unfolds, Atom’s benefits come to light, such as skipping box office and concession lines. The spot ends with Anna playfully scanning her Atom digital ticket to enter the theater, enjoying popcorn in her seat, and feeling thoroughly delighted by the Atom VIP experience.

“Going to the movies with friends is the best way to experience a film and having an easier way for people to go to the movies is critical,” said Faris.  “Trust me, when you skip the line with the Atom app, you will say ‘Yippee ki-yay movie lovers!'”

“It’s like the Global Entry of movie apps,” said Berg. “A few taps and you’re in!”

“As we prepare for a blockbuster summer at the box office, and therefore a blockbuster summer on our ticketing platform, we felt now was the ideal time to kick-start our first-ever brand campaign,” said Amber Tarshis, Head of Marketing for Atom Tickets.  “The campaign reinforces our key value propositions of share-ability, flexibility and convenience in purchasing movie tickets using Atom. As an entity that believes in working with the industry, we were thrilled to work with Peter to give our first campaign a truly cinematic feeling. Anna is a great representation of our brand, as she truly is that relatable and lovable movie fan.”

“Atom Tickets is changing the game for people who love to go out to the movies,” says Janet Higdon, EVP, Executive Creative Director at Deutsch. “The app allows users to invite friends, choose seats together, and even pre-order concessions so you can skip all the theater lines. We’re launching Atom’s app by celebrating years of film through some of the most iconic movie moments of all time with none other than the movie lover herself, Anna Faris.”

The campaign features a robust cinema buy with NCM and Screenvision to reach core moviegoers. Digital has the longest running creative across platforms with ads appearing on Hulu and YouTube.

Recently, Atom welcomed Hollywood powerhouses and Seven Bucks Productions co-founders Dwayne Johnson and Dany Garcia to the company’s advisory board. They join Steven Spielberg, J.J. Abrams, and Tyler Perry to serve as a resource to the company, as Atom continues to develop the most innovative and convenient theatrical movie experiences to consumers.

The Atom experience also comes to life across the web thanks to seamless ticketing integrations with leading tech and social platforms, including: Amazon, IMDb, Google, Facebook and Instagram.

How Atom Tickets Works:
Atom Tickets re-imagines the most convenient way for users to plan a night out at the movies. The free app and website provide relevant reviews, trailers and synopses to help customers make the best decision on what to see. Moviegoers may then invite friends (via their contact lists) to purchase their own tickets to join them. Atom offers streamlined ordering of tickets and concessions from any Android or iOS phone. At the theater, users go directly to the ushers and concession counters, where they simply scan a QR code at tablet kiosks. Paper tickets and IOUs have been replaced by Atom’s innovative platform, which keeps all plans, messaging, payment and tickets in one place.