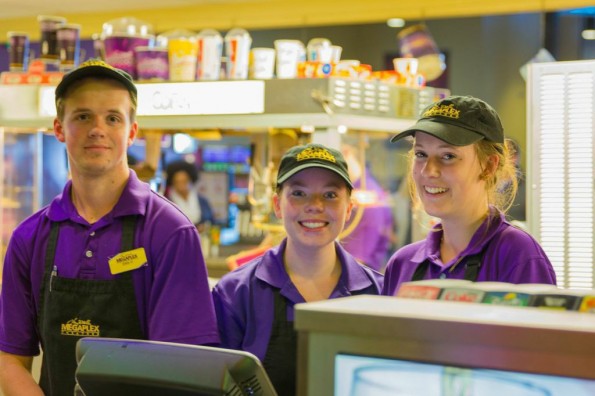 Santa Monica, CA (April 17, 2018) – The mobile food ordering trend is rapidly growing with various brands enabling consumers to use apps to order ahead, scan to pick up, and skip the lines. Atom Tickets, the social movie ticketing platform, is leaning into this experience by reminding movie ticket holders they can order concessions the day of their movie. The concession feature, available in the Atom app, is aimed at helping theater owners capture incremental revenue at the snack counter. The company also announced today that Southern Theatres and Megaplex Theatres will join AMC Theatres, Regal Cinemas, Landmark Cinemas and Emagine Entertainment in offering the Atom concessions pre-order feature to moviegoers.

Currently, the Atom app allows moviegoers to pre-order concessions at participating exhibitors at the time they purchase a movie ticket, with about 1 in 3 Atom users doing so. With the new feature, moviegoers will receive an alert on their smartphone as they near the theater or movie time, giving them a second chance to order concessions through the app for quick pick up at the counter. This enhanced functionality was validated by a recent study by Atom Tickets of domestic movie ticket purchasers, which found that 52% of respondents said “long lines” was the No. 1 reason moviegoers skip the concessions. The study also found that 50% of moviegoers would buy more often and buy more items if they could pre-order.

“Consumers are growing increasingly familiar with mobile food and beverage ordering, and when we drilled into the specifics of Atom users, we discovered that nearly three-quarters of our users were already ordering pizza, sandwiches, coffee and more using a mobile app, so this was an immediate area for us to focus on,” said Matthew Bakal, Chairman and Co-founder of Atom Tickets. “It’s a win-win for exhibitors, who can recapture lost sales, as well as moviegoers, who can bypass the long lines and get to their seats, with snacks in hand, more quickly.”

“As the industry evolves, we continue to seek out innovative technologies like those offered by Atom Tickets,” said Dar Hackbarth, Director of Marketing and Communications, Southern Theatres. “With partners like Atom, we are able to stay on the front edge of innovation to deliver a more enjoyable moviegoing experience to our patrons.”

Atom Tickets will be demonstrating how concessions can be pre-ordered along with its new feature at CinemaCon from inside The Coca-Cola Company booth.

How Atom Tickets Works:
Atom Tickets re-imagines the most convenient way for users to plan a night out at the movies. The free app and website provide relevant reviews, trailers and synopses to help customers make the best decision on what to see. Moviegoers may then invite friends to purchase their own tickets to join them. Atom offers streamlined ordering of tickets and concessions from any Android or iOS phone. At the theater, users go directly to the ushers and concession counters, where they simply scan a QR code at tablet kiosks. Paper tickets and IOUs have been replaced by Atom’s innovative platform, which keeps all plans, messaging, payment and tickets in one place.