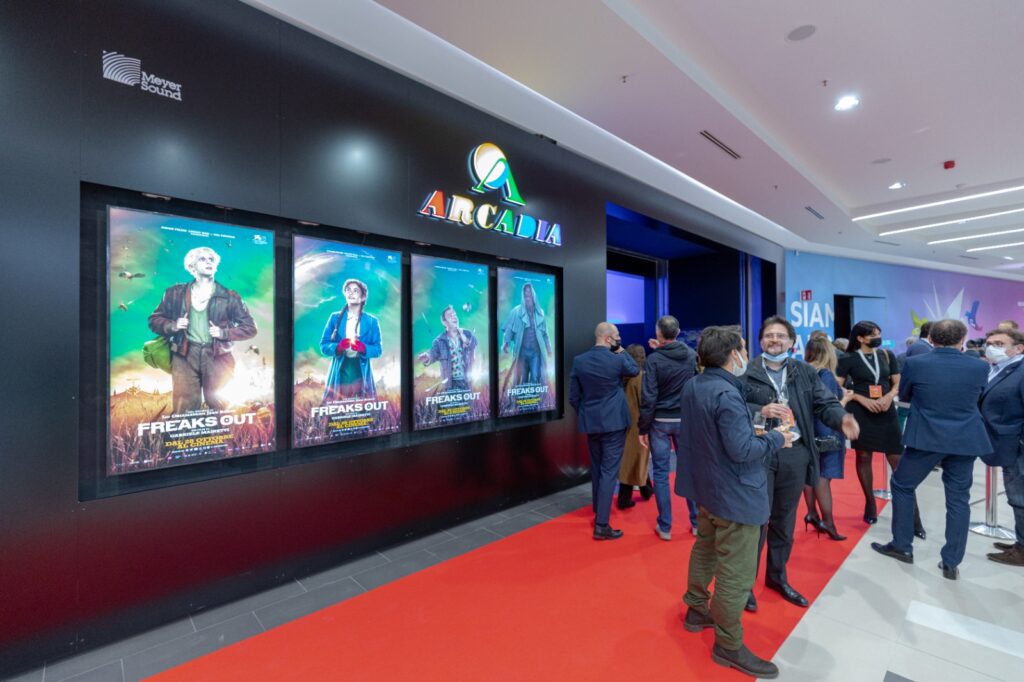 The brand new Arcadia Stezzano cinema (6km from Bergamo and 50km from Milan) is inaugurated today, as part of the expansion of the Le Due Torri Shopping Center. The opening is enriched by Gabriele Mainetti’s “Freaks Out” premiere, courtesy of Goon Films, Lucky Red, Rai Cinema and 01 Distribution. The movie will be released in Italy on 28th October 2021 thanks to 01 Distribution.

Arcadia Stezzano is the first new cinema inaugurated by an Italian independent exhibitor since the global pandemic and, for this reason, the film chosen to switch on 4K laser projectors by Christie is “Freaks Out”, the most significant high-budget production investment in recent Italian film history: selected at the 78th Venice International Film Festival, the film was acclaimed by international critics and audiences.

The opening of Arcadia Stezzano acquires particular significance and value in this historical moment, especially in a place such as the Bergamo area, which has suffered greatly from the consequences of the pandemic.

Arcadia Stezzano represents a new investment by Piero Fumagalli, the independent exhibitor considered to be the pioneer of Italian multiplexes and founder of the Arcadia Cinema in Melzo (Milan), inaugurated in 1997 and equipped with one of the largest and most technologically advanced cinema screens in the world:

PLF Sala Energia of Arcadia Cinema Melzo won the ICTA Best Screen in Europe Award at CineEurope in Barcelona in 2017. For more than twenty years, Arcadia’s consistent reputation of top quality theatrical presentation has been synonymous with the last technology avant-garde: today, Fumagalli holds up the image of Italian cinema exhibition across the European entertainment business.

This launch also comes at a time when the Italian film market is starting to recover after the onset of the pandemic and represents an injection of confidence in the entire exhibition industry.

Piero Fumagalli says: “We are happy and proud of the new opening of Arcadia Stezzano inside “Le Due Torri” Shopping Center, a cinema we’ve designed together with architect Benjamin Feldtkeller. Continuing Arcadia’s commitment in the technical excellence, this new location will offer the best cinema projection and sound technology available, ensuring the highest technical levels already appreciated by the audience of the Lombardy provinces and beyond and prosecuting the collaboration with leading companies recognized worldwide, such as Meyer Sound, Christie and Dolby, which have always supported Arcadia. The state-of the-art of image and sound technology will guarantee to Arcadia Stezzano audiences the opportunity to live the best big screen experiences, enjoy unique emotions and unforgettable memories as the greatest filmmakers intend.”

In each of its auditoriums, Arcadia Stezzano offers a unique cinematic experience, enriched by a complete film offer for all tastes, made up of Italian and international premieres, but also special screenings dedicated to the great film classics of the past.

About Arcadia
Founder of Arcadia, the Fumagalli family has been in the Italian independent cinema exhibition business for over forty years, firstly from 1979 at Cinema Centrale and then opening the first Arcadia Melzo location in 1997. Arcadia Cinemas now operates at four locations across Northern Italy. In 2017, Piero Fumagalli was recognised by the International Union of Cinemas with the UNIC Achievement Award at CineEurope in Barcelona.