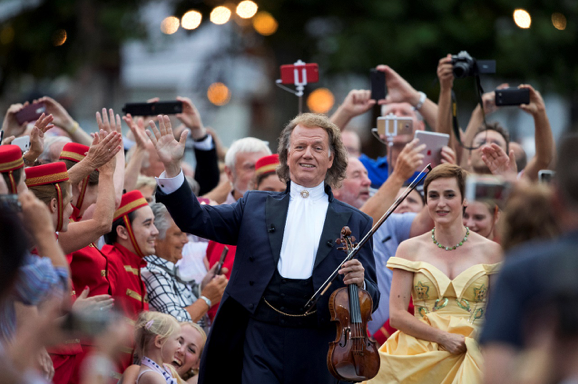 The King Of Waltz has made event cinema history! Piece of Magic Entertainment’s André Rieu’s 2018 Maastricht Concert “Amore” in cinemas took more than £1.66 million in the UK and Ireland, becoming the biggest music concert event in cinema of all time (source: comScore).

Cinema goers attended the showings held at over 500 locations across the UK and Ireland across the weekend of July 28th and 29th, grossing a verified result of £1,608,000 (source: comScore), and with selected encores the following weekend, reached a total of £1,667, 790 (source: comScore).  This is the second year that André Rieu’s Maastricht concert was both produced and distributed by Piece of Magic Entertainment.

Caspar Nadaud, CEO of Piece of Magic Entertainment commented, “We are extremely proud that in Piece of Magic’s second year we broke the record of the biggest music concert in cinemas of all time.  We are looking forward to continue building the audiences for André and to diversify the genre with new strands of content”.

Grainne Peat, Managing Director of Event Cinema Association commented, “André Rieu continues to resonate and demonstrate true affinity amongst a loyal and growing audience for event cinema content.  Each year, his performances exceed the last in terms of box office takings – André Rieu’s 2018 Maastricht Concert – having taken over £1.66 million in the UK box office this summer, is now the UK’s 10th biggest event cinema title of all time. As an association we are seeking how we can better harness the excitement of this category to appeal to and attract a wider audience profile”.