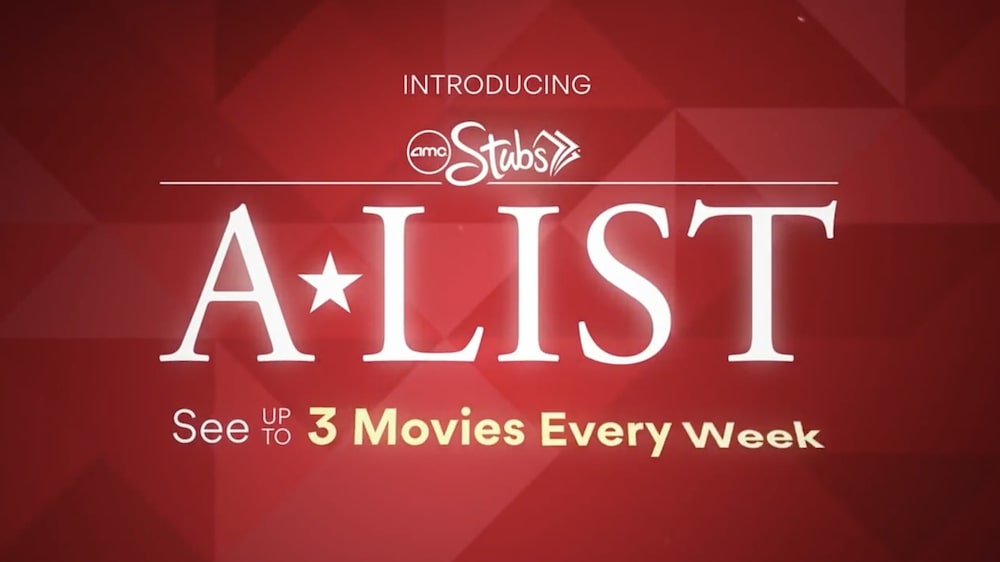 Adam Aron, AMC CEO and President, said, “While we do not plan to issue A-List enrollment statistics on a weekly basis, our hitting more than 400,000 enrolled members only three months and a week after launching the program is an enormous milestone. Those who have been following our progress with A-List are aware that we had originally expected 500,000 enrollments at the one-year mark and 1,000,000 enrollments at the two-year mark. Above our wildest hopes, in just 14 weeks, we have achieved 80% of our one-year goal and 40% of our two-year goal. This all bodes well for the future of increased moviegoing in America.”

For information about AMC Stubs A-List and to sign up, guests can inquire at their local AMC Theatre, or at AMC’s web site amctheatres.com/alist or on AMC’s iOS and Android smartphone apps after downloading or updating them with the latest app release.

AMC Stubs A-List rewards guests with up to three movies per week, all for just $19.95 (plus tax) per month. Through A-List, members can enjoy every available showtime, at every AMC location, in every format — including IMAX at AMC, Dolby Cinema at AMC, RealD 3D, Prime at AMC and BigD. AMC Stubs A-List can be used at the spur of the moment or also can make planning ahead days or weeks in advance possible, as securing tickets is made easy via reservations capabilities on the AMCTheatres.com web site, or on the AMC Theatres smartphone app. A-List joins AMC Stubs Insider and AMC Stubs Premiere in AMC’s fast-growing AMC Stubs loyalty program. AMC Stubs A-List members also enjoy all the benefits of AMC Stubs Premiere, including free upgrades on popcorn and soda, free refills on large popcorn, express service at the box office and concession stand, no online ticketing fees and 100 points for every $1 spent for the AMC Stubs A-List monthly fee and food and beverage spending at AMC theatres. AMC Stubs Premiere members receive a $5 reward for every 5,000 points earned, which translates to a 10% credit toward future AMC purchases.

AMC is the largest movie exhibition company in the U.S., in Europe and throughout the world with more than 1,000 theatres and nearly 11,000 screens across the globe. AMC has propelled innovation in the exhibition industry by: deploying its Signature power-recliner seats; delivering enhanced food and beverage choices; generating greater guest engagement through its loyalty program, web site and smartphone apps; offering premium large format experiences and playing a wide variety of content including the latest Hollywood releases and independent programming. AMC operates among the most productive theatres in the United States’ top markets, having the #1 or #2 market share positions in 22 of the 25 largest metropolitan areas of the United States, including the top three markets (NY, LA, Chicago). Through its Odeon subsidiary AMC operates in 14 European countries and is the #1 theatre chain in Estonia, Finland, Italy, Latvia, Lithuania, Norway, Spain, Sweden and UK & Ireland. In a joint partnership with The Development and Investment Entertainment Company, a subsidiary of The Public Investment Fund of Saudi Arabia, AMC also operates AMC Cinemas in the Kingdom of Saudi Arabia. For more information, visit www.amctheatres.com.