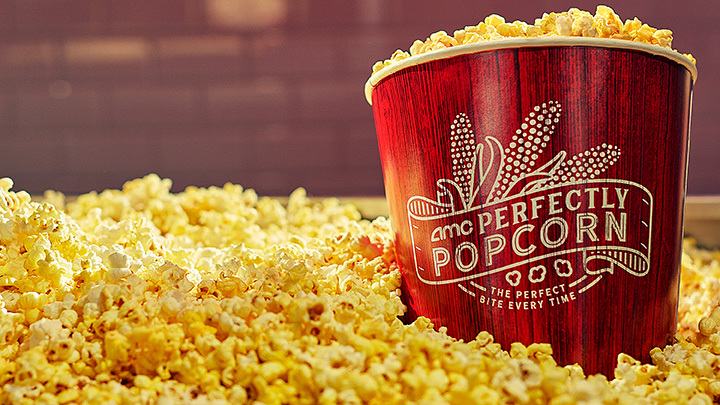 AMC Entertainment (NYSE:AMC), the largest theatrical exhibitor in the United States, in Europe & the Middle East and in the world, today announced that it is expanding its business outside of the traditional theatrical exhibition industry with plans to capture a piece of the growing multi-billion dollar popcorn market. AMC will sell its popular AMC Theatres Perfectly Popcorn, which has been available to consumers in theatres for more than a century continually since the year 1920, through three new platforms.

The U.S. multi-billion popcorn market is expected to grow significantly over the next several years. With the popularity of AMC Theatres’ Perfectly Popcorn, and given AMC’s current position as the largest freshly popped popcorn provider in the United States, AMC believes that an expansion into the sale of popcorn on a retail basis outside of theatres is a natural extension of AMC’s core business.

AMC initially plans to launch up to five “AMC Theatres Perfectly Popcorn” stores, counters and or kiosks in shopping malls around the country in the first half of 2022. These initial locations are likely to be in malls without an AMC theatre location. AMC plans to have up to 15 retail stores open by the end of 2022. Significantly more locations are expected to open in 2023 and beyond. The menu will consist of traditional and gourmet-flavored popcorn, candy and other movie theatre treats, Coca-Cola Freestyle options and bottled water. All such AMC Theatres Perfectly Popcorn locations will feature popcorn that is freshly made on site, allowing consumers to enjoy the unbeatable taste and aroma of “real movie theatre popcorn” outside of the theatre.

Also in the plans for 2022, consumers will be able to order AMC Theatres Perfectly Popcorn from nearby theatres, and have it delivered to their homes through the use of existing delivery-to-home mobile services. And AMC is working to offer prepackaged and ready-to-pop microwaveable AMC Theatres Perfectly Popcorn, hitting the shelves in supermarkets and convenience stores around the country later in the year.

Adam Aron, Chairman of the Board and CEO of AMC, commented: “The announcement that AMC will become a competitor in the multi-billion popcorn market is so natural and logical, one wonders why the idea has not been tried before. Needless to say, AMC knows popcorn ever so well. On our busiest days, AMC Theatres currently pops in the range of 50 tons of popcorn per day. But the popularity of popcorn extends well beyond the doors of our movie theatres. With this new AMC initiative, we expect to reach entirely new segments of the U.S. population with our popular AMC Theatres Perfectly Popcorn. For AMC Entertainment, this is an opportunity to diversify our business and to create a new revenue stream for our company, all the while delighting popcorn lovers whether they are in our theatres, are on the go, or find themselves in the comfort of their own homes.”