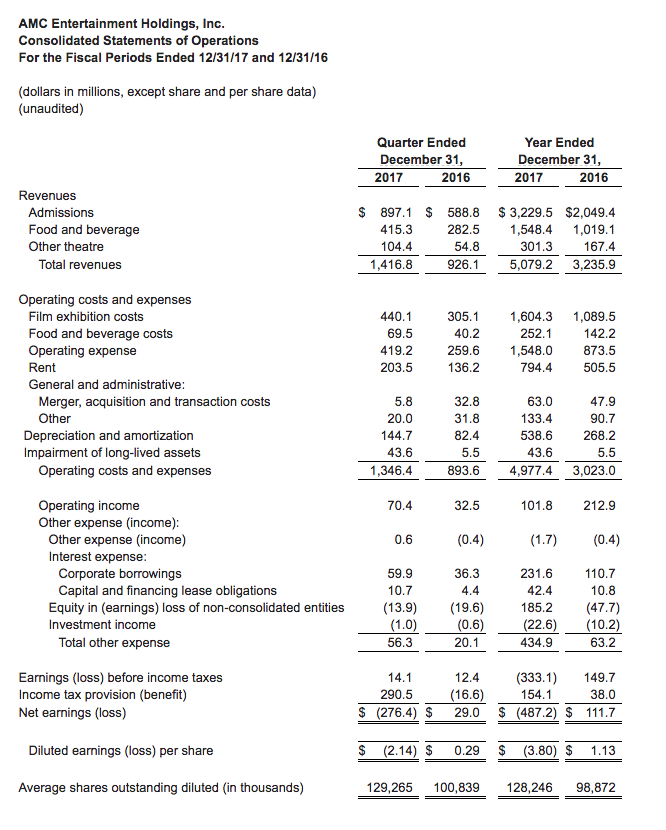 Highlights for the fourth quarter ended December 31, 2017, include the following:

“Fiscal year 2017 ended on a very positive note, much like it began, as movie-goers patronized AMC theatres in significant numbers. The acquisitions of Odeon, Carmike and Nordic, and the investments we made during 2017, both domestically and internationally, in food and beverage initiatives, in our signature recliners and in premium sight and sound experiences, together with previously announced revenue enhancements and cost controls drove record revenues and improved operating margins in the fourth quarter,” said Adam Aron, CEO and President of AMC Entertainment. “As we look forward to 2018 and beyond, we are pleased and greatly encouraged by the progress we made during and since the fourth quarter of 2017, both operationally and in dealing with several specific industry challenges. And naturally, we are inspired by the record breaking audiences that are coming to our movie theatres across the U.S. and Europe to take in BLACK PANTHER. With more great movies on the horizon, and further investment at AMC in guest heralded amenities, we are increasingly optimistic about the potential for success at AMC Entertainment in 2018 and the years to come.”

Highlights for the year ended December 31, 2017 include the following:

Commentary on the quarter by Craig Ramsey, AMC’s Executive Vice President and Chief Financial Officer, is available at http://investor.amctheatres.com.

On August 3, 2017, AMC announced that its Board of Directors authorized the repurchase of up to $100 million of the Company’s Class A common stock over a two-year period.

As of March 1, 2018, the Company has repurchased approximately 50% of the authorized $100 million, having purchased more than 3.2 million shares of AMC’s Class A common stock for approximately $47.5 million, representing an average share price of $14.86.

Income taxes for the first nine months of 2017 were recorded using an estimated effective tax rate of 39%. During the fourth quarter of 2017, we determined in accordance with accounting standards that a valuation allowance or reserve against our deferred tax assets was required. Our deferred tax assets primarily relate to deferred revenue and lease accounting items.

Based on the resulting impact of the passage of the Tax Reform Act and the valuation allowance on the Company’s deferred tax assets, the Company recorded a charge of approximately $310.0 million to the income tax provision in our U.S. markets for the fourth quarter ended December 31, 2017.

Going forward we expect our consolidated effective tax rate to be between 22% and 26%.

The Company will host a conference call via webcast for investors and other interested parties beginning at 7:30 a.m. CST/8:30 a.m. EST on Thursday, March 1, 2018. To listen to the conference call via the internet, please visit the investor relations section of the AMC website at www.investor.amctheatres.com for a link to the webcast. Investors and interested parties should go to the website at least 15 minutes prior to the call to register, and/or download and install any necessary audio software.

Participants may also listen to the call by dialing (877) 407-3982, or (201) 493-6780 for international participants. An archive of the webcast will be available on the Company’s website after the call for a limited time.

AMC (NYSE: AMC) is the largest movie exhibition company in the U.S., in Europe and throughout the world with 1,014 theatres and 11,169 screens across the globe. AMC has propelled innovation in the exhibition industry by: deploying more plush power-recliner seats; delivering enhanced food and beverage choices; generating greater guest engagement through its loyalty program, web site and smart phone apps; offering premium large format experiences and playing a wide variety of content including the latest Hollywood releases and independent programming. AMC operates among the most productive theatres in the United States’ top markets, having the #1 or #2 market share positions in 22 of the 25 largest metropolitan areas of the United States, including the top three markets (NY, LA, Chicago). Through its Odeon subsidiary AMC operates in 14 European countries and is the #1 theatre chain in Estonia, Finland, Italy, Latvia, Lithuania, Spain, Sweden and UK & Ireland. www.amctheatres.com

This press release, along with other news about AMC, is available at www.amctheatres.com. We routinely post information that may be important to investors in the Investor Relations section of our website, www.investor.amctheatres.com. We use this website as a means of disclosing material, non-public information and for complying with our disclosure obligations under Regulation FD, and we encourage investors to consult that section of our website regularly for important information about AMC. The information contained on, or that may be accessed through, our website is not incorporated by reference into, and is not a part of, this document. Investors interested in automatically receiving news and information when posted to our website can also visit www.investor.amctheatres.com to sign up for email alerts.

This press release includes “forward-looking statements” within the meaning of the “safe harbor” provisions of the United States Private Securities Litigation Reform Act of 1995. Forward-looking statements may be identified by the use of words such as “forecast,” “plan,” “estimate,” “will,” “would,” “project,” “maintain,” “intend,” “expect,” “anticipate,” “prospect,” “strategy,” “future,” “likely,” “may,” “should,” “believe,” “continue,” “opportunity,” “potential,” and other similar expressions that predict or indicate future events or trends or that are not statements of historical matters. These forward-looking statements are based on information available at the time the statements are made and/or management’s good faith belief as of that time with respect to future events, and are subject to risks, trends, uncertainties and other facts that could cause actual performance or results to differ materially from those expressed in or suggested by the forward-looking statements. These risks, trends, uncertainties and facts include, but are not limited to, risks related to: motion picture production and performance; AMC’s lack of control over distributors of films; intense competition in the geographic areas in which AMC operates; increased use of alternative film delivery methods or other forms of entertainment; shrinking exclusive theatrical release windows; international economic, political, regulatory and other risks; risks and uncertainties relating to AMC’s significant indebtedness; AMC’s ability to execute cost cutting and revenue enhancement initiatives; box office performance; additional impairment related to AMC’s NCM investment; limitations on the availability of capital; risks relating to AMC’s inability to achieve the expected benefits and performance from its recent acquisitions; AMC’s ability to comply with a settlement it entered into with the U.S. Department of Justice pursuant to which it agreed to divest holdings in National CineMedia, LLC; AMC’s ability to refinance its indebtedness on favorable terms; optimizing AMC’s theatre circuit through construction and the transformation of its existing theatres may be subject to delay and unanticipated costs; failures, unavailability or security breaches of AMC’s information systems; risks relating to impairment losses, including with respect to goodwill and other intangibles, and theatre and other closure charges; AMC’s ability to utilize net operating loss carryforwards to reduce its future tax liability or valuation allowances taken with respect to deferred tax assets; review by antitrust authorities in connection with acquisition opportunities; risks relating to unexpected costs or unknown liabilities relating to recently completed acquisitions; risks relating to the incurrence of legal liability including costs associated with recently filed class action lawsuits; general political, social and economic conditions and risks, trends, uncertainties and other factors discussed in the reports AMC has filed with the SEC. Should one or more of these risks, trends, uncertainties or facts materialize, or should underlying assumptions prove incorrect, actual results may vary materially from those indicated or anticipated by the forward-looking statements contained herein. Accordingly, you are cautioned not to place undue reliance on these forward-looking statements, which speak only as of the date they are made. Forward-looking statements should not be read as a guarantee of future performance or results, and will not necessarily be accurate indications of the times at, or by, which such performance or results will be achieved. For a detailed discussion of risks, trends and uncertainties facing AMC, see the section entitled “Risk Factors” in AMC’s Annual Report on Form 10-K, filed with the SEC on March 1, 2018, and the risks, trends and uncertainties identified in its other public filings. AMC does not intend, and undertakes no duty, to update any information contained herein to reflect future events or circumstances, except as required by applicable law.