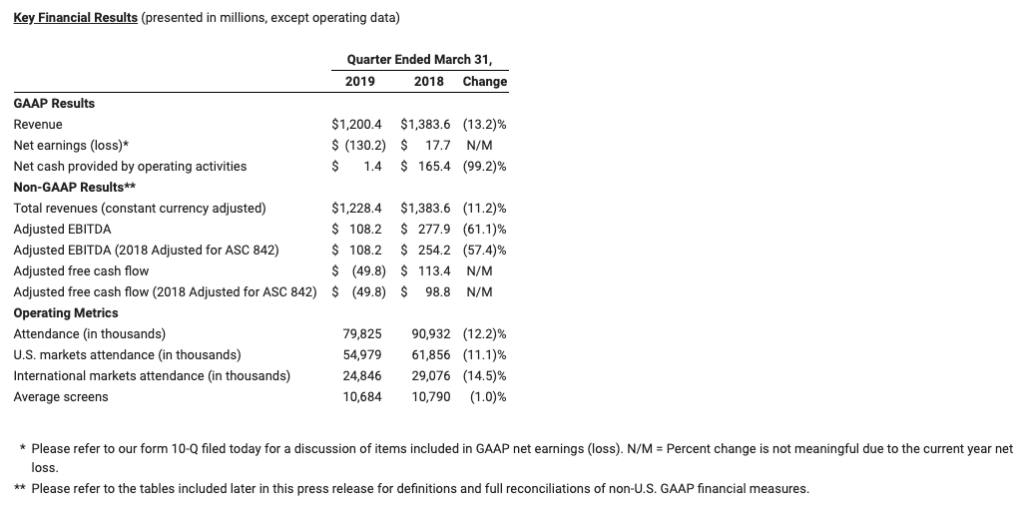 “Even with the anticipated slow start to the year, we have been and continue to be quite bullish about the full year prospects for AMC, currently expecting 2019 Adjusted EBITDA to exceed 2018 results, adjusted for ASC 842. While we have high expectations for 2019, due to an extraordinary slate of movies coming, the timing of releases within the film slate suggests that it will be a back-end loaded year. In addition, the first quarter of 2019 faced a tough year-over-year comparison, as “Black Panther” last year made the first quarter of 2018 the second highest grossing first quarter of all time. As we thought was likely for our U.S. theatres, in our largest market by far, the U.S. industry box office declined a healthy 16.2% this quarter. Even so, we are comforted that AMC continued to outperform the U.S. industry box office, notably with domestic attendance per screen declining only 10.1% in the first quarter of 2019. This beat the industry by approximately 570 basis points. Importantly, comparing AMC to the rest of the industry (meaning comparing AMC to the rest of the U.S. industry excluding AMC) attendance at AMC’s U.S. theatres actually beat the competition by more than 700 basis points. Additionally, our U.S. food and beverage capture of $5.23 per patron set a new first quarter record for our company. This all is largely attributable to the power of the AMC platform: stemming from experiential initiatives and enhancements at our theatres; a frictionless use of technology to communicate, engage and sell to our guests; combined with the soaring popularity of our AMC Stubs loyalty program and our AMC Stubs A-List subscription program,” said Adam Aron, CEO and President of AMC.

Aron added, “Looking ahead, we remain enthusiastic about our progress against our strategy and medium to long-term financial targets as outlined during our recent Investor Day. This progress has already kicked off in a big way with “Avengers: Endgame”, which shattered box office records both domestically and internationally. Grossing well over $2 billion globally in just its first two weeks in theatres, “Avengers: Endgame” continues to validate the appeal to consumers of seeing high quality movies, communally, in theatres, on the big screen. Accordingly, we continue to be excited about the remainder of 2019, which we believe might be the highest grossing 9-month period in cinema history. We are optimistic that the full year 2019 box office will be at least as strong as 2018, and potentially could be the first year ever that the domestic box office breaks $12 billion.”

Revenue: First-quarter total revenues were $1.2 billion, declining 13.2% on a GAAP basis (declining 11.2% on a constant currency basis) from the year-ago quarter. Total revenues were lower in all categories, primarily driven by global industry-wide softness in the first quarter tied to the timing of the 2019 film slate, compared against a strong first quarter in 2018. These factors contributed to a 12.2% decrease in total attendance year-over-year, which was partially offset by AMC’s outperformance versus the U.S. industry box office (outperformed domestic attendance per screen by approximately 570 bps). The 4.8% decline in total average ticket price (2.4% decline on a constant currency basis) reflects the deliberate implementation of our A-List program and other promotional pricing initiatives, as well as declines in IMAX and 3D volumes primarily related to the mix of films during the period. Total food and beverage revenue per patron grew 3.6% (up 5.4% on a constant currency basis) as we continued to implement our strategic pricing actions and premium food and beverage initiatives.

Given the natural fluctuations in the box office between quarters and within the year due to the timing of film releases, the Company’s management focuses on its full-year results and performance against its disclosed medium to long-term targets rather than on any particular quarter.

Net Earnings (Loss): Net loss was ($130.2) million, compared with net earnings of $17.7 million in the year-ago quarter. The decline in net earnings included the impact of the 12.2% decline in attendance and several other items, including $28.4 million of expense in the 2019 first quarter related to the quarterly fair-value remeasurement of a derivative liability and derivative asset, $24.2 million of prior year rent benefit related to a lease modification, and a $10.8 million reduction in cash distributions from non-consolidated entities in the 2019 first quarter related to the sale of our National CineMedia, LLC (“NCM”) ownership.

Adjusted EBITDA: Total Adjusted EBITDA was $108.2 million (including a $22.7 million negative impact from the implementation of ASC 842), down 61.1% from the year-ago quarter. U.S. markets Adjusted EBITDA declined 62.8%, while International markets Adjusted EBITDA declined 55.8% (down 51.6% on a constant currency basis). The decrease in total Adjusted EBITDA was primarily driven by the decline in our revenues as a result of the timing of the 2019 film slate when compared to a particularly strong 2018 period in combination with the significant operating leverage in our business, as well as a number of other items, including a prior year $24.2 million benefit to rent expense related to a lease modification, a $22.7 million negative impact related to the adoption of the new lease standard ASC 842, and a $10.8 million reduction in cash distributions from non-consolidated entities in the 2019 first quarter related to the sale of AMC’s remaining stake in NCM.

Industry Performance: In the first quarter of 2019, the U.S. industry box office declined 16.2% to $2.4 billion on a 14.8% decline in attendance. AMC outperformed the U.S. industry on attendance per screen by approximately 570 basis points, and after excluding AMC from the U.S. industry statistics, AMC outperformed the industry by more than 700 basis points. The decline was caused by the back-end loaded timing of the 2019 film slate, weaker hold-over films from the fourth quarter of 2018, and the tough comparison to last year’s “Black Panther”, which is the third-highest domestic grossing film ever. Internationally, the industry box office in countries served by Odeon and Nordic’s theatres experienced a 12.4% and 10.8% decline, respectively, on a constant currency basis. The industry box office across Europe was negatively affected by the same items that affected the U.S. box office and weak local product.

Since the end of the first quarter, the box office has begun to build momentum with the April opening of “Avengers: Endgame”, which broke nearly every box office record both domestically and internationally and grossed over $2 billion globally in its first two weeks in theatres.

Circuit Update: As of March 31, 2019, AMC owned, operated, or had interests in 636 theatres in the U.S. and 365 theatres internationally. In the first quarter, the Company added premium recliner seating to seven theatres in the U.S., including two new build theatres, and one theatre internationally. Premium large format offerings continue to attract guests by delivering the best sight and sound experience, and the Company added four new Dolby at AMC screens, two new IMAX screens and one new Prime at AMC screen during the quarter. Furthermore, during the first quarter of 2019, 637 screens were converted to reserved seating. The Company is on track to convert all 5,700 AMC and AMC-Dine-In branded screens to reserved seating by the end of the second quarter.

AMC Stubs A-List Program: Since its launch in June 2018, the A-List tier of our successful AMC Stubs loyalty program has already attracted more than 785,000 subscribers, far in excess of initial internal expectations. During the quarter, AMC implemented a 10% membership price increase in ten states and a 20% price increase in five states. Based on the average frequency of our A-List members, their associated full-price bring-along guest attendance, their food and beverage spend and the price increases in the first quarter, we believe the A-List program resulted in incremental profitability in the first quarter of 2019 compared to our estimated results if the program had not existed.

New Lease Accounting Standard (ASC 842): The Company adopted ASC 842 on January 1, 2019. As previously disclosed, ASC 842 is an accounting change with no impact on AMC’s business or total cash flows. While this new rule introduces certain presentation changes to all three of AMC’s core financial statements, it does not affect day-to-day operations or cash generation. As a result of adopting ASC 842, the key changes are as follows: 1) the Company’s consolidated balance sheet now includes operating right-of-use assets and operating lease liabilities of $4.8 billion and $5.4 billion, respectively, at March 31, 2019; 2) the Company’s income statement for the three months ended March 31, 2019 includes additional rent expense of $30.4 million, a decline in depreciation and amortization of $24.0 million and a decline in interest expense of $6.9 million; and 3) the Company’s cash flows provided by operating activities for the three months ended March 31, 2019 is lowered by $14.0 million, offset by an equivalent increase in the Company’s cash flows provided by financing activities.

Cash Dividend: The Company paid approximately $21.8 million of dividends in the first quarter of 2019.