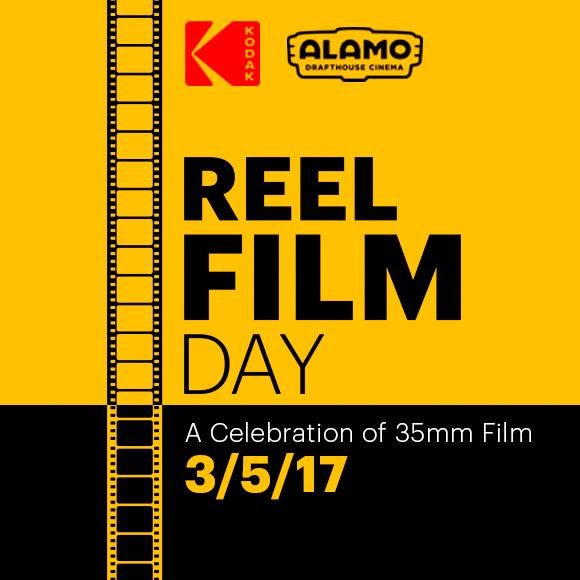 Mark your calendars, cinephiles. 35mm film will be alive in all its glory on March 5 — or 3.5. A collaborative initiative from Alamo Drafthouse and Kodak, the first-ever “Reel Film Day” will champion the beauty of cinema’s richest and most enduring format with celebratory screenings at Alamo Drafthouse and independent theaters across the U.S.

“There is nothing like experiencing actual 35mm projected film,” said Steve Bellamy President of Kodak Motion Picture and Entertainment. “I don’t care if it is the greatest 8K projector in the world,35mm is a radically different thing and there is simply no comparison. Projected film is watching light blast through dozens of layers of color dye clouds and emulsion, 24 times per second. A film projectionist is a master craftsman and seeing his or her work is akin to performance art. While the world has largely migrated to the utility of video projectors, there is a massive growth in consumers who understand the experience of film projection. This is why theatres projecting film are coming back so strongly and doing so well!”

As a true celebration of the wide-ranging scope of cinema, Reel Film Day programming will be deeply eclectic, featuring classics including Powell and Pressburger’s THE RED SHOES and Orson Welles’ A TOUCH OF EVIL rubbing reels with cult favorites like BUCKAROO BANZAI and Quentin Tarantino’s INGLORIOUS BASTERDS. At press time over 25 screenings are taking place, and it is expected that ultimately hundreds of theaters across the country will join in. No matter the location, the unifying factor is that all films will be presented large and lustrous from 35mm film.

“Less than 5% of our film history exists in a high-definition digital format,” says Alamo Drafthouse CEO and Founder Tim League. “If you really love film, then join us to recognize, celebrate and support film screenings in independent theaters everywhere. This scrappy group of fellow cinephiles is truly preserving film history. Support your local theater, support 35mm (and 70mm) film on 3/5, the first annual Reel Film Day.”

For those looking for a marquee-level display of their devotion to 35mm film exhibition, acclaimed art boutique Mondo has created an exclusive line of T-shirts and enamel pins to mark the day. Merchandise will be on sale starting 3.5 at mondotees.com/collections/reel-film-day.

Finally, to fully realize the day’s efforts to keep 35mm alive, $3.50 from tickets to all of the 35mm screenings at Alamo Drafthouse locations and select partner venues, as well as a portion of the proceeds from Mondo’s sales, will be donated to the prestigious Film Foundation to help fund an upcoming important film preservation effort.

Other theatres that project 35mm film are encouraged to join the initiative and can contact sarah.pitre@drafthouse.com for more information.

About MONDO
Mondo is an art gallery and online store devoted to a passionate love of film, art, music and toys. The company has received global recognition for bringing art back to movie poster design and has emerged as one of the leading curators of classic and contemporary film soundtracks on vinyl. Utilizing the talents of world class artists and designers, Mondo produces limited edition, screen printed posters based on film, television and comic properties, working with the leading entertainment brands including DC Comics, HBO, Marvel, Paramount Pictures, Universal Studios, Walt Disney Studios and Warner Brothers as well as filmmakers like Paul Thomas Anderson, Guillermo Del Toro, Zack Snyder, Quentin Tarantino and Edgar Wright. Based in Austin, TX, Mondo operates out of a permanent gallery space, hosting regular exhibitions featuring a blend of breathtaking original artwork and limited edition screen prints. Mondo aspires to be a creative home for artists and designers to work and have their visions realized, whether through posters, gallery shows, vinyl, apparel or toys. Their first convention in 2014, MondoCon, was a celebration of art, music, film and their creators. Mondo is also recognized by the Academy of Motion Picture Arts & Sciences with a full archive of film posters as part of their research library. The parent company of Mondo is Alamo Drafthouse.

About Kodak
Kodak is a technology company focused on imaging. We provide – directly and through partnerships with other innovative companies – hardware, software, consumables and services to customers in graphic arts, commercial print, publishing, packaging, electronic displays, entertainment and commercial films, and consumer products markets. With our world-class R&D capabilities, innovative solutions portfolio and highly trusted brand, Kodak is helping customers around the globe to sustainably grow their own businesses and enjoy their lives. For additional information on Kodak, visit us at kodak.com, follow us on Twitter @Kodak, or like us on Facebook at Kodak.