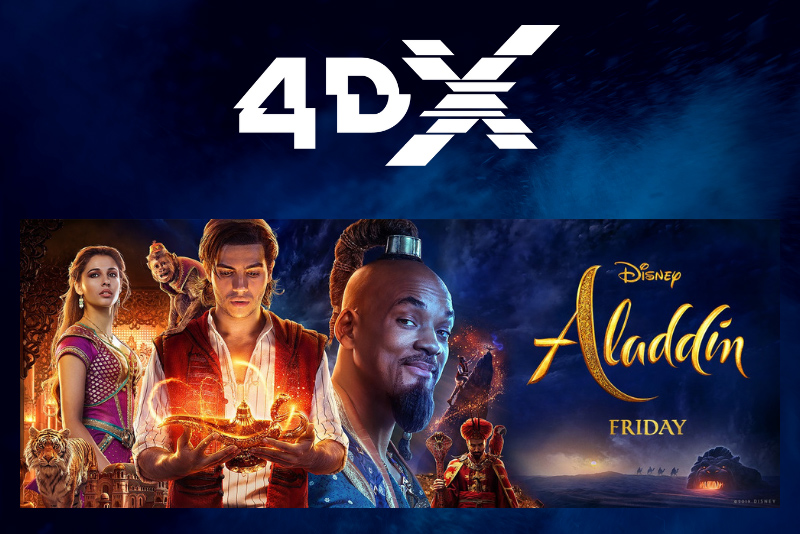 Japan and Korea were amongst the highest performing countries, in which “Aladdin” surpassed the all-time attendance record with over 750,000 attendees in South Korea to date, and 80% occupancy rate in its second and third weekend of opening in Japan, which is the highest number since 2016. Other top performing countries include India, Luxembourg, Netherland and Spain with over 60% occupancy rate.

Audiences were able to relive iconic scenes like the “Magic Carpet Ride” in the immersive auditoriums where 4DX captured the dips and swerves of a flying magic carpet gliding across a windy night sky. 4DX theaters across South Korea held “Dance Along” events where audience members sang and danced in the motion-enhanced 4DX chairs. The nostalgia and musical elements of “Aladdin” in 4DX also drew in the highest female demographic in their 20s and 30s.

“There are many industry professionals who think 4DX is only suitable for the action genre, but we have seen great potential for the musical genre through the success of ‘Aladdin’ in the 4DX format,” said Jaime Tarrazon, CEO of Filmax Gran Via in Spain.

“’Aladdin’ in 4DX provided an opportunity to bring back female audiences in their 20s and 30s back to the cinemas,” said Shuhei Ichikawa, Sales Department General Manager of United Cinemas, the largest 4DX partner in Japan.

“We are thrilled for the tremendous performance of ‘Aladdin’ in 4DX as there were so many elements of the film that worked wonderfully with the format,” said JongRyul Kim, CEO of CJ 4DPLEX. “We cannot wait to share the rest of the exciting titles that are upcoming with Walt Disney Studios and for audiences to experience the variety of genres offered in 4DX.”

Amongst special formats worldwide, 4DX is the leading content provider screening over 117 Hollywood titles in 2018 alone. Following the success of “Aladdin” in 4DX, Walt Disney Studios and CJ 4DPLEX will collaborate to release additional titles in the second half of the year.

4DX innovative theater technology enhances the on-screen visuals of action-packed blockbusters and haunting horror films, transcending the traditional cinema experience through special effects including motion-synchronized seats, wind, fog, rain, lightning, snow, bubbles, vibrations, and scents. The result is one of the most immersive cinema formats in the industry, drawing fans into the action on the big screen.