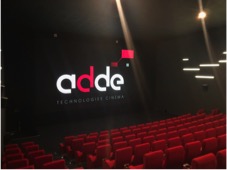 ADDE takes a major step in installing the 1st 10 meters LED screen in a French cinema room at Pathé Beaugrenelle in Paris. ADDE has implemented its developed inhouse sound system of the brand DARKSIDE.

Lyon, France. (February 25, 2019) – This device requires a totally new approach to the Sound diffusion system located behind the screen. Two years of research and testing have helped to develop a revolutionary solution. ADDE has developed speakers specially adapted to this type of screen. These speakers are located in the lower and upper parts with a specific orientation and settings adapted according to the size of the room. The expertise and creativity of ADDE’s team made possible what many thought impossible : an incomparable image quality sublimated by an exceptional sound.

«We are extremely proud to have equipped the first french cinema room with a Samsung ONYX Cinema LED screen, and the world’s first cinema room with an audio system not owned by the manufacturer of the LED screen. We especially thank Les Cinémas Pathé Gaumont for allowing us to be one of the actors in this historic step for Cinema Business, and for the confidence they show us. » Marion Rosset, CEO of ADDE

ADDE conceptualizes, manufactures and installs Cinema equipment for Cinema owners, local authorities and professionals of the Cinema industry, since 1981.