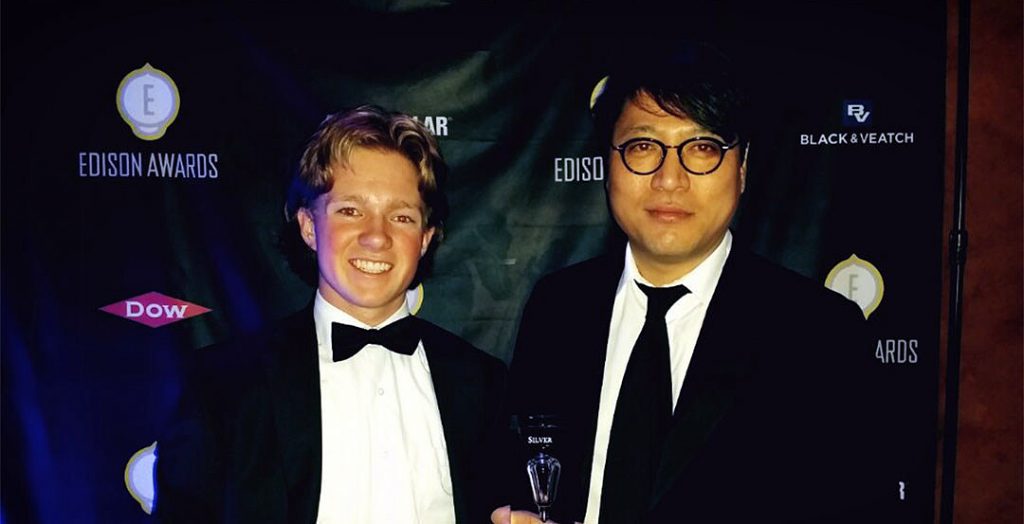 CJ 4DPLEX has won a Silver award, given to its new concept, “4DX with ScreenX,” at this year’s Edison Awards. Honoring state-of-the-art products and innovation around the world, the Edison Awards recognized “4DX with ScreenX” in the Media and Visual Communication – Entertainment category at a ceremony last night in New York City. Among the other two candidates for the award were Fusion by GoPro and Nvidia ShieldTv by Nvidia.

“4DX with ScreenX,” the cutting edge format developed by CJ 4DPLEX, is considered one of the top theatrical experience technologies. It blends two of the most immersive theatre experiences on the market today: the motion-seating and environmental effects of 4DX that are synchronized with the on-screen action, and the panoramic, 270-degree ScreenX format that projects onto three theatre walls and brings moviegoers beyond the frame of the screen through a proprietary multi-projection process.

4DX with ScreenX eliminates the boundaries between movie viewing behavior and the format. Moviegoers were always at the crossroads of selecting which format they should choose to enjoy a movie but 4DX with ScreenX created a whole new experience value to fulfill their desire to watch a movie on an even 270-degree panoramic wider screen and to get more dynamic movie-viewing experiences at the same time.

“It is an honor to have received the Silver award, and testament to our commitment to developing unique technologies to immerse people around the world into the movies. We are very proud of ‘4DX with ScreenX’ and look forward to bringing it to our cinema partners around the world in the years to come,” remarked CJ 4DPLEX CEO Byung-Hwan Choi.

According to the Edison Awards, finalists were chosen as the “best of the best” by 3,000 of the world’s top senior business executives, academics, and innovation professionals. One of the evening highlights included Marillyn Hewson, Chairman, President and CEO of Lockheed Martin Corporation accepting the Edison Awards’ highest honor, the Edison Achievement Award.

CJ 4DPLEX also won the Silver Edison Award in 2015 for 4DX, marking the first time that a 4D-based cinema technology received an Edison Award in the Media and Visual Communications – Entertainment category.

This second nomination for CJ 4DPLEX symbolizes the continued interest in innovative new cinema technologies which not only contribute new revenue opportunities to the movie industry, but also advance a new entertainment culture that will further inspire future innovation.

Recently successfully launching its global 500th theatre opening, 4DX is now the fastest premium format in the world. CJ 4DPLEX plans to build on this momentum and continue to thrive worldwide, with the goal to be the leading premium cinema brand in the global cinema industry.

About CJ 4DPLEX
CJ 4DPLEX (www.cj4dplex.com) is the world’s first 4D cinema company, headquartered in Seoul with international offices in Los Angeles and Beijing. The company created 4DX, the first and leading 4D cinema technology for feature films, providing moviegoers with an immersive, multi-sensory cinematic experience, allowing the audience to connect with movies through motion, vibration, water, wind, snow, lightning, scents, and other special effects that enhance the visuals on-screen. CJ 4DPLEX brings 4DX auditoriums to exhibition partners along with 4DX codes for both major Hollywood blockbusters and local titles, as well as content ranging from concerts to commercials. Each 4DX auditorium incorporates motion-based seating synchronized with more than 20 different effects and optimized by a team of skilled editors, maximizing the feeling of immersion within the movie, beyond the limits of audio and video. Since 2009, more than 500 Hollywood titles have been screened in 4DX. To date, more than 61,000 4DX seats operate in 500 auditoriums spanning 58 countries. For ScreenX, there are 138 sites worldwide, including 86 screens in South Korea; 40 screens in China; 3 in the United States; 4 in Turkey; 2 in Vietnam and 1 in Thailand, Japan, and Indonesia.

About the Edison Awards
The Edison Awards is a program conducted by Edison Universe, a non-profit, 501(c)(3) organization dedicated to recognizing, honoring, and fostering innovation. The awards are named after Thomas Alva Edison (1847-1931) whose inventions, new product development methods and achievements changed the world.

For more information on the 2018 winners, nomination process and event highlights visit www.edisonawards.com and register to be a future judge