4DX Opens in 50th Country with First Theatre in Australia 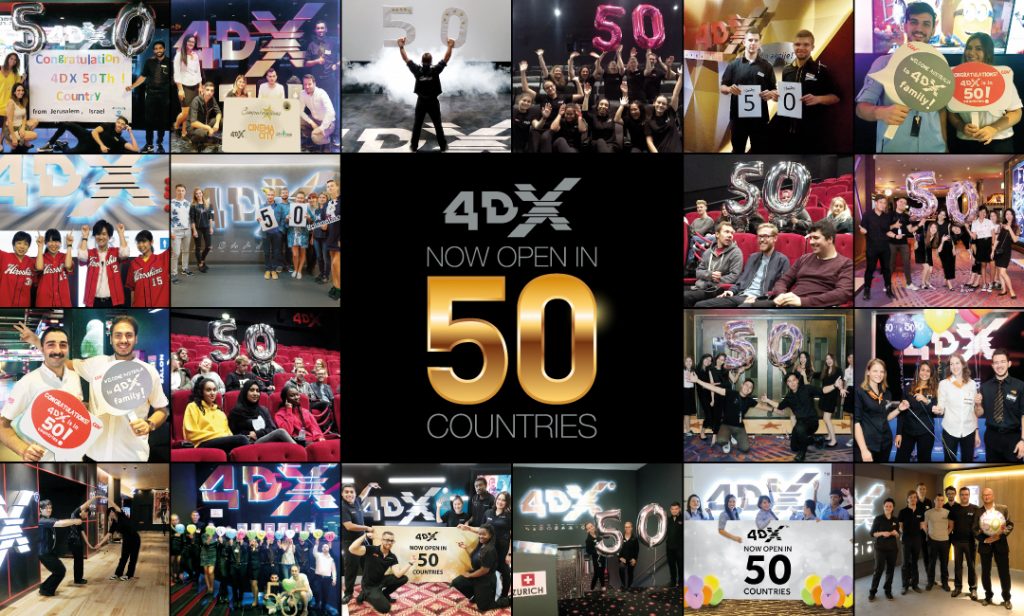 4DX, Leader in Immersive Cinema, to Debut on Sixth Continent with "Thor: Ragnarok" In Partnership with Village Cinemas

CJ 4DPLEX has today announced that 4DX – the world’s first and leading 4D cinema technology for feature films – opened its first theatre in the country and continent of Australia on October 26. The first 4DX location in Australia opened through a partnership with Village Cinemas that was previously announced at CinemaCon 2017. With this opening, 4DX is now available in 50 countries spread over six continents.

The new 4DX theatre at Village Cinemas Century City is the country’s first 4D cinema for feature films, including Hollywood blockbusters and local films, in addition to alternative content, such as concerts and commercials. 4DX now has a footprint on six continents and continues to expand globally. 4DX overwhelmingly leads the 4D cinema market, occupying the largest number of screens in 50 countries worldwide. 4DX is the only state-of-the-art 4D cinema technology that has reached six continents in the world and the fastest-growing premium cinema format, having reached 50 countries in eight years and nine months following its debut in 2009. With this opening, more than 50,000 4DX seats have been installed in theatre auditoriums, with the capacity to accommodate more than 100 million worldwide moviegoers per year.

In Australia, Village Cinemas is one of the country’s largest cinema operators, with an interest in screens across all Australian states. Since beginning operations in 1954, Village Cinemas has both expanded the number of cinemas it operates and enriched the cinema-going experience. In particular, Village Roadshow was one of the first companies to develop the multiplex concept and to make stadium seating a standard fixture in all its cinemas. It was also Australia’s first major cinema exhibitor to convert 100% of its screens to the digital format.

“Our footprint continues to grow as we find new partners excited to bring 4DX to their countries” said Byung-Hwan Choi, CEO of CJ 4DPLEX. “There is a reason we are the first 4D cinema company to reach 50 countries and to have a presence on six continents, and we are glad that our partners see that.”

General Manager of Sales and Marketing, Mohit Bhargava, said: “We are continuously looking for ways to innovate, and build on our commitment to delivering a world of movie experiences to our guests that make the movies more meaningful at the cinemas.”

“4DX will transform the way our guests will enjoy films and we’re so pleased to bring this opportunity to our customers, first. We have no doubt it’ll be an exciting experience for cinema buffs and families.”

Adrian Witcombe, Head of Innovation & Strategy, said: ”Our goal is to create memorable movie experiences, and 4DX harnesses the very latest in film exhibition technology to do just that. 4DX allows the audience to feel the film as it is happening, and provides a sensory cinematic experience unlike anything that can be had at home.”

About CJ 4DPLEX
CJ 4DPLEX is the world’s first 4D cinema company, headquartered in Seoul with international offices in Los Angeles and Beijing. The company created 4DX, the first and leading 4D cinema technology for feature films, providing moviegoers with an immersive cinematic experience that utilizes all five senses, allowing the audience to connect with movies through motion, vibration, water, wind, snow, lightning, scents, and other special effects that enhance the visuals on-screen. CJ 4DPLEX brings 4DX auditoriums to exhibition partners along with 4DX codes for both major Hollywood blockbusters and local titles. Each auditorium incorporates motion-based seating synchronized with more than 20 different effects and optimized by a team of skilled editors, maximizing the feeling of immersion within the movie, beyond the limits of audio and video. Since 2009, more than 450 Hollywood and local titles have been screened in 4DX. As of October 2017, more than 50,000 4DX seats operate in 415 auditoriums spanning 50 countries. CJ 4DPLEX was named a Most Innovative Company of 2017 in Live Events by Fast Company. For more information, please visit www.cj4dplex.com

About Village Entertainment
Village Entertainment includes the Village Cinemas and Leisure businesses and is continuing to diversify into a range of dynamic entertainment offerings including premium bar concepts and stand alone food and beverage brands. Cinema Exhibition is where Village Roadshow started, having started in 1954 with the first of its drive-in cinemas. Today, Village Roadshow jointly owns and operates approximately 600 cinemas across three countries, and continues to lead the world in providing state-of-the-art entertainment experiences. In Australia, Village Cinemas is one of the country’s largest exhibitors with a large share of screens across all Australian states.

Since its inception, Village Cinemas has not only expanded the number of cinemas it operates, it has enriched the cinema-going experience through the creation of ‘entertainment destinations’ aiming to increase attendances and improve the world of cinema. The division has also sought to widen the appeal of going to the movies by creating new concept cinemas attractive to a broader demographic and providing entertainment in true style. Village Cinemas is a major force in cinema exhibition in Australia and overseas, and continues to lead the world in stadium seating, digital projection, 3D blockbuster movies, premium cinema experiences such as Gold Class, Vpremium, Vmax, Vjunior, Cinema Europa and Drive In Cinemas maintained via innovative ticket purchasing. Village Cinemas has been and will continue to be the place ‘where movies mean more.’ For more information, visit http://villagecinemas.com.au