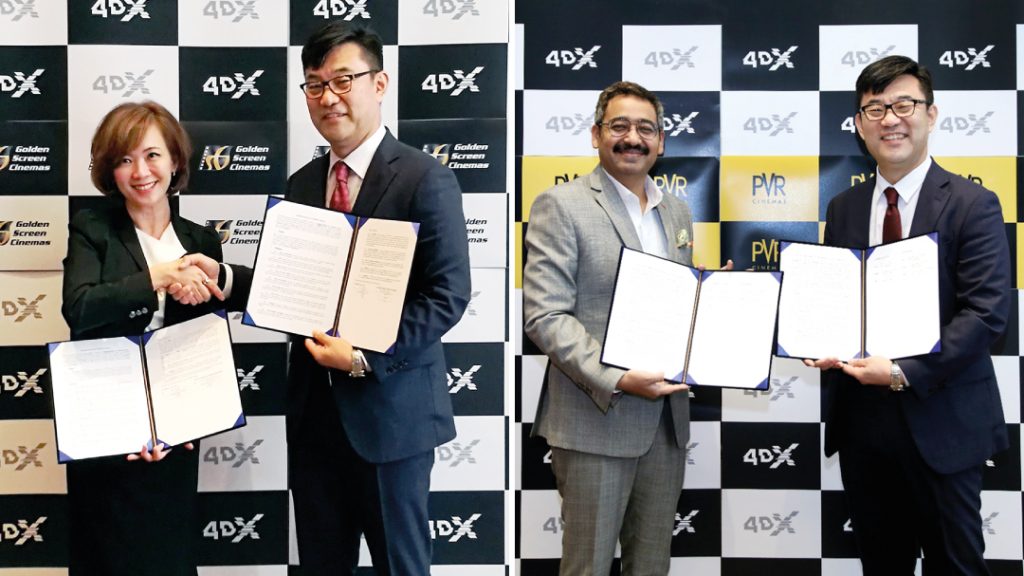 CJ 4DPLEX, an innovative cinema technology featuring moving seats and environmental effects has strengthened its hold on the Asian market by signing a binding MOU (memorandum of understanding) for a partnership with Golden Screen Cinemas (GSC) in Malaysia and by agreeing to a new agreement with PVR Cinemas. The announcement was made at the CineAsia trade show being held at the Hong Kong Convention & Exhibition Centre, December 11-14, 2017.

This MOU with GSC and CJ 4DPLEX will bring a 4DX theater to the GSC Paradigm Mall Johor Bahru location by the end of 2017. This location is GSC’s only site in the state of Johor and is accessible to an estimated 2 million people – all of whom live 30 minutes from the mall by car. GSC is Malaysia’s largest cinema exhibitor, which operates a total of 328 auditoriums in 35 locations across the country. GSC also operates 73 auditoriums at 12 locations in Vietnam.

“As one of Malaysia’s leading cinema exhibitors, Golden Screen Cinemas is committed to innovating and diversifying our offerings to deliver new and enriching cinema experiences for customers. Our partnership with 4DX is the next step for us to bring to life the magic of cinema, as 4DX intensifies the experience of the movies to be even more immersive, engaging, and meaningful than before,” said Koh Mei Lee, CEO of Golden Screen Cinemas.

”We believe that 4DX, as one of the world’s leading technologies in premium cinematic entertainment, will transform the way Malaysians enjoy films at our cinemas, offering unforgettable sensory experiences you just can’t get at home. We look forward to a long and successful partnership with 4DX, as we aim to extend the 4D cinematic experience to movie-goers all over the country,” she added.

The deal marks an extended association between the two leading players as PVR cinemas previously have three 4DX screens operational in the country at Noida, Mumbai and Bengaluru and furthermore, two screens are soon to be launched at new prominent sites. With this extended partnership, PVR will add 16 more 4DX screens at its cinemas, taking the total to an impressive 21 4DX auditoriums in India by the end of 2019. In addition, PVR Cinemas retains its position as the largest Indian multiplex with 21 4DX theatres and the major provider of 4DX experience in the country. PVR cinemas, India’s largest cinema exhibition company, currently operate a cinema circuit of 600 screens at 131 properties in 51 cities across India, serving 75 million patrons annually.

PVR and CJ 4DPLEX initially announced their partnership at CinemaCon in 2015. From the success of current locations, both partners plan their new roll-out for 4DX at PVR Cinemas’ highest grossing theaters in Delhi, Gurgaon, Bengaluru, Mumbai, Chandigarh, Pune and others.

Addressing the gathering, Mr. Gautam Dutta, CEO, PVR Ltd, said “Our relationship with 4DX is not just one between a buyer and a vendor, but goes way beyond that to being strategic partners. We believe that the best movie viewing formats such as 4DX should reach the maximum number of people around the world. We believe that this partnership is definitely not a short term one but we see both the companies coming together for various other strategic projects as well in the near future. With more global technologies on the rise, the expectations of audiences are increasing as they look for a more enhanced, immersive and experiential cinema and PVR, being the innovator in the cinema exhibition space in India, aims to fulfill this expectation constantly by aligning itself with the world leaders in motion picture technology.”

“It is a great pleasure for us to announce that we start our business in Malaysia with GSC. We are very excited into a new market and looking forward to offer this unique moviegoing experience to Malaysian movie fans.” Following the last year’s announcement, we are extremely pleased to announce our further expansion with PVR Cinemas at this CineAsia. It is a definitely meaningful event for us that the largest cinema exhibitor in India recognized 4DX as the pioneer of the innovative cinema technologies and decided to expand our network for two years in a row,” said Byung-Hwan Choi, CEO of CJ 4DPLEX.

About CJ 4DPLEX
CJ 4DPLEX is the world’s first 4D cinema company, headquartered in Seoul with international offices in Los Angeles and Beijing. The company created 4DX, the first and leading 4D cinema technology for feature films, providing moviegoers with an immersive cinematic experience that utilizes all five senses, allowing the audience to connect with movies through motion, vibration, water, wind, snow, lightning, scents, and other special effects that enhance the visuals on-screen. CJ 4DPLEX brings 4DX auditoriums to exhibition partners along with 4DX codes for both major Hollywood blockbusters and local titles. Each auditorium incorporates motion-based seating synchronized with more than 20 different effects and optimized by a team of skilled editors, maximizing the feeling of immersion within the movie, beyond the limits of audio and video. Since 2009, more than 460 Hollywood and local titles have been screened in 4DX. As of December 2017, more than 52,000 4DX seats operate in 432 auditoriums spanning 51 countries. CJ 4DPLEX was named a Most Innovative Company of 2017 in Live Events by Fast Company. For more information, please visit www.cj4dplex.com

About GSC
Golden Screen Cinemas Sdn Bhd (GSC), Malaysia’s largest cinema exhibitor, is a wholly-owned subsidiary of the PPB Group (a member of the Kuok Group). GSC operates a total of 401 screens in 47 locations across Malaysia and Vietnam, with 328 screens in 35 locations in Malaysia, and 73 screens in 12 locations in Vietnam through a partnership with Galaxy Studio.

About PVR Ltd.
PVR Ltd. is the largest and the most premium film exhibition company in India. Since its inception in 1997, the brand has redefined the cinema industry and the way people watch movies in the country. The company acquired Cinemax in 2012 and had taken over DT Cinemas in the year 2016 serving 75 million patrons annually. Currently PVR operates a cinema circuit of
600 screens at 131 properties in 51 cities (18 states and 1 Union Territory).

PVR Ltd, the integrated ‘film and retail brand’ has PVR Cinemas as its major subsidiary. Its other two subsidiaries are PVR Leisure and PVR Pictures. PVR Pictures has been a prolific distributor of non-studio/ independent international films in India since 2002. With over 350+ Hollywood, 175+ Hindi, 75+ regional films across genres being released under this banner over more than a decade, PVR Pictures has the highest box office shares of independent foreign language films in the country. The arm has been instrumental in recognizing the gap with respect to the demand and supply of discerning cinema and has consistently released around 30-40 films per year.

Under the leadership of Mr. Ajay Bijli, Chairman and Managing Director, PVR Ltd, the company has expanded exponentially and has been honored with many awards over the years. To name a few: Top Multiplex Chain of the Year at Big Cine Expo 2016, CNBC TV-18 ‘Asia Innovator of the Year’ at India Business Leader awards 2016 and Fortune India’s Next 500 biggest and best midsize companies 2016. The company has received an award at Businessworld Cinema Exhibition Awards & Conference for the Fastest Growing Chain and the Best Chain National in 2014. PVR has also been ranked as The India’s most Trusted Cinema Display Brand in Brand Trust Report for three years consecutively from 2013 and has been Retailer of the year for 5 consecutive years at Images Retail Forum. It also bagged the CNBC’s Emerging India Awards 2013 and VC Circle Awards for Media and Entertainment Category in the same year.