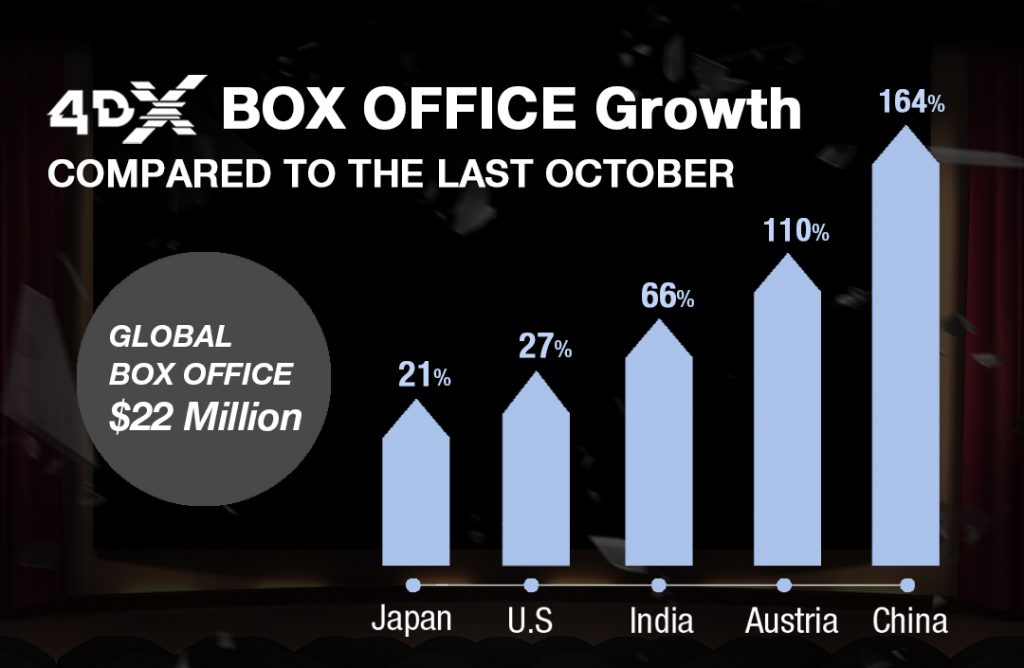 CJ 4DPLEX (www.cj4dx.com), the world’s leading cinema technology company, today announced that the multi-sensory 4DX format drew $22 million at the global box office in October, up 16% year-over-year, making it the highest ever recorded for the month of October in the history of the company.

Breakout performances boosted the 4DX box office leading to increased performances around the globe led by China at 164%, followed by Austria 110%, India 66%, U.S. 27% and Japan 21%.

The remarkable results in October were driven not only by Hollywood titles including “Maleficent: Mistress of Evil” and “Gemini Man” but also by several local titles in China, India and Japan.

China’s box office feat can be attributed to strong performances of two Chinese films released in October in 4DX, “The Captain” and “The Climbers”. These films grossed over $4.5 million at the 4DX box office with “The Captain” ranking as the highest performing 4DX film of October.

“War”, a high octane action entertainer produced by Yash Raj Films, had a great run at the Indian box office, contributing to the noteworthy growth of up to 66% compared to last year in the same month at the 4DX box office in India. “The audiences enjoyed watching the film in 4DX and the feedback has been encouraging,” said Rohan Malhotra, Vice President – Distribution, Yash Raj Films. “War” is the first 4DX Bollywood movie of 2019, releasing across Europe and the Middle East in the United Kingdom, France, Norway, Oman, Kuwait and the UAE.

In addition, Japanese animation films, “Weathering With You”, “Girls und Panzer das Finale: Part 1-2”, “Konosuba-God’s Blessing on this Wonderful World! Legend of Crimson” and “Promare”, hit 4DX screens in Japan, topping $2.8 million at the box office. Among them, “Weathering With You”, which was released in 59 4DX auditoriums in Japan, and 5 4DX auditoriums in Taiwan, marked the highest in gross.

Altogether, the success of local films’ contributed to the 4DX global box office share in October of up to 43%.

In addition to its box office growth, 4DX expanded its footprint in October, altogether opening 10 new auditoriums across the U.S., Canada, U.K., France, Denmark, Switzerland, Japan and India, including 1 4DX with ScreenX auditorium in Japan. To date, 4DX is available in 694 auditoriums in 65 countries.

The October box office announcement follows the record-breaking third quarter performance of 4DX, which brought more than $90 million in the global box office, ranking as the best quarterly performance since its launch in 2009.

4DX provides moviegoers with an advanced, multi-sensory experience, allowing the audience to connect with movies through motion, vibration, water, wind, snow, lightning, scents, and other special effects that enhance the visuals on-screen. Each 4DX auditorium incorporates motion-based seating synchronized with more than 21 different effects and optimized by a team of skilled editors, maximizing the feeling of immersion within the movie, beyond the limits of audio and video. More than 660 Hollywood and local titles have been screened in 4DX. To date, more than 79,000 4DX seats operate in 694 auditoriums, spanning 65 countries.

ScreenX is the world’s first multi-projection theater technology used within a theatre setting, marking it as the most visually advanced theater experience of CJ 4DPLEX. ScreenX allows moviegoers to go beyond the frame of the movie screen by utilizing a proprietary system that expands images of feature films and pre-show advertising to the left and right walls of the theatre, creating a surrounding, panoramic, 270-degree viewing experience. To date, ScreenX has been installed in 270 screens around the world in 27 countries.