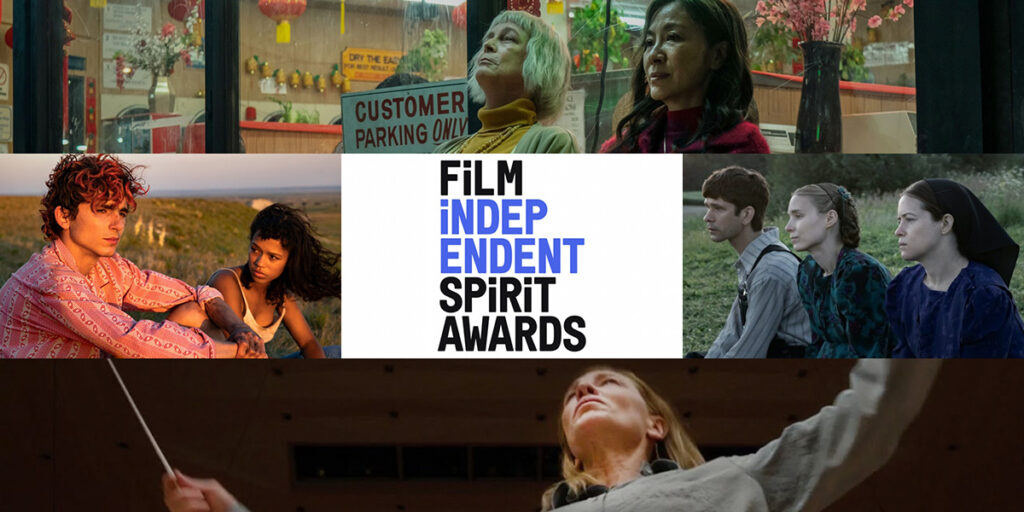 All Award Winners, Including in New Performance Categories, to be Announced at the 38th Film Independent Spirit Awards on March 4 in Santa Monica

Film Independent, the nonprofit organization dedicated to fostering independence and inclusivity in visual storytelling, announced this morning the nominations for the film categories at the 2023 Film Independent Spirit Awards. Film Independent President Josh Welsh introduced the prerecorded video announcements, which featured guest presenters Raúl Castillo (2019 Spirit Award nominee for “We Are Animals”), and Taylour Paige (2022 Spirit Award winner for “Zola”). You can watch the nominations here, which include the previously announced category updates.

“We couldn’t be more honored to celebrate this year’s exciting film nominees,” said Josh Welsh, President of Film Independent. “As the Film Independent Spirit Awards evolve with our changing industry, including embracing non-gendered categories, we look to these artists to lead us into the future. And as we celebrate the 30th anniversary of our Artist Development programs, we are incredibly proud to have Film Independent Fellows Siân Heder and Chloé Zhao return as our honorary co-chairs.”

The 2023 Best Feature nominees included “Bones and All,” “Everything Everywhere All At Once,” “Tár,” “Women Talking” and “Our Father, the Devil.” “Everything Everywhere All At Once” led all films with eight total nominations, including Best Director for Daniel Kwan & Daniel Scheinert, and acting nominations for stars Michelle Yeoh, Jamie Lee Curtis, Ke Huy Quan and Stephanie Hsu. “Tár” received seven nominations including Best Director for Todd Field and acting nominations for Cate Blanchett and Nina Hoss.

New to the nominations this year is the Best Breakthrough Performance category, honoring actors making themselves known to wider audiences through noteworthy character portrayals. The nominees include, in addition to Stephanie Hsu, Frankie Corio of “Aftersun,” Gracija Filipovi? of “Murina,” Lily McInerny of “Palm Trees and Power Lines” and Daniel Zolghadri of “Funny Pages.”

Also new this year is a switch to gender neutral acting awards, with the separate lead and supporting actor and actress categories being replaced by the ten-nominee Best Lead and Best Supporting Performance awards.

“Women Talking,” from director Sarah Polley, was selected to receive the Robert Altman Award, which is bestowed upon a single film’s director, casting director and ensemble cast. The Altman Award was created in 2008 in honor of legendary director Robert Altman, known for populating his films with extraordinary ensemble casts.

Celebrating creative independence, diversity, innovation and uniqueness of vision, the 38th Film Independent Spirit Awards will take place on Saturday, March 4, 2023. The in-person show, held on the beach in Santa Monica, will be streamed internationally across multiple online and digital platforms. The Spirit Awards are the primary fundraiser for Film Independent’s year-round slate of programs, which cultivate the careers of emerging filmmakers and promote diversity and inclusion in the industry.

This year the Spirit Awards Film Nominating Committees selected nominees from over 25 different countries, applying the following guidelines in determining nominees: uniqueness of vision, original and provocative subject matter, economy of means. The Spirit Awards Nominating Committees are comprised of writers, directors, producers, cinematographers, editors, actors, critics, casting directors, film festival programmers and other working film professionals. Of all nominated writers and directors, 61% are women and 34% are BIPOC. Of all nominated actors, 70% are women and 27% are BIPOC. And of all 2023 nominees, 51% are women and 33% are BIPOC. This year, the Spirit Awards nominating committees are 50% female, 6% Nonbinary, 3% Transgender, and 61% BIPOC; 32% identify as LGBTQ+ and 8% identify as people with disabilities (PWD).

Spirit Awards nominations in television-specific categories will be announced separately on Tuesday, December 13.

The Film Independent Spirit Awards are supported by the Official Spirit, Bulleit Frontier Whiskey, and the Official Water, FIJI Water. Getty Images is the Official Photographer.

As always, winners are selected by Members of Film Independent. Members must be current as of December 20 to receive full voting benefits, including access to nominee screeners. To join Film Independent and vote on the Spirit Awards, please visit filmindependent.org/join.

Press and publicist credential applications for the 2023 Film Independent Spirit Awards will open on December 13, 2022. For any questions regarding credentials, please contact Jason Berger at publicity@filmindependent.org.

BEST FEATURE (Award given to the producer.)

BEST FIRST FEATURE (Award given to director and producer)

JOHN CASSAVETES AWARD – Given to the best feature made for under $1,000,000 (Award given to the writer, director and producer.)

Daniel Kwan & Daniel Scheinert
“Everything Everywhere All At Once”

Daniel Kwan & Daniel Scheinert
“Everything Everywhere All At Once”

Regina Hall
“Honk for Jesus. Save Your Soul.”

Taylor Russell
“Bones and All”

Michelle Yeoh
“Everything Everywhere All At Once”

Jamie Lee Curtis
“Everything Everywhere All At Once”

Ke Huy Quan
“Everything Everywhere All At Once”

Mark Rylance
“Bones and All”

Stephanie Hsu
“Everything Everywhere All At Once”

Paul Rogers
“Everything Everywhere All At Once”

ROBERT ALTMAN AWARD – Given to one film’s director, casting director and ensemble cast

BEST DOCUMENTARY (Award given to the director and producer)

BEST INTERNATIONAL FILM (Award given to the director)

SOMEONE TO WATCH AWARD – The Someone to Watch Award, now in its 29th year, recognizes a talented filmmaker of singular vision who has not yet received appropriate recognition.

Adamma Ebo
“Honk for Jesus. Save Your Soul.”

TRUER THAN FICTION AWARD – The Truer Than Fiction Award, now in its 28th year, is presented to an emerging director of non-fiction features who has not yet received significant recognition.

Reid Davenport
“I Didn’t See You There”

About Film Independent
For over 40 years, Film Independent has helped filmmakers get their projects made and seen. The nonprofit organization’s core mission is to champion creative independence in visual storytelling and support a community of artists who embody diversity, innovation and uniqueness of vision.

For more information or to become a Member, visit filmindependent.org.