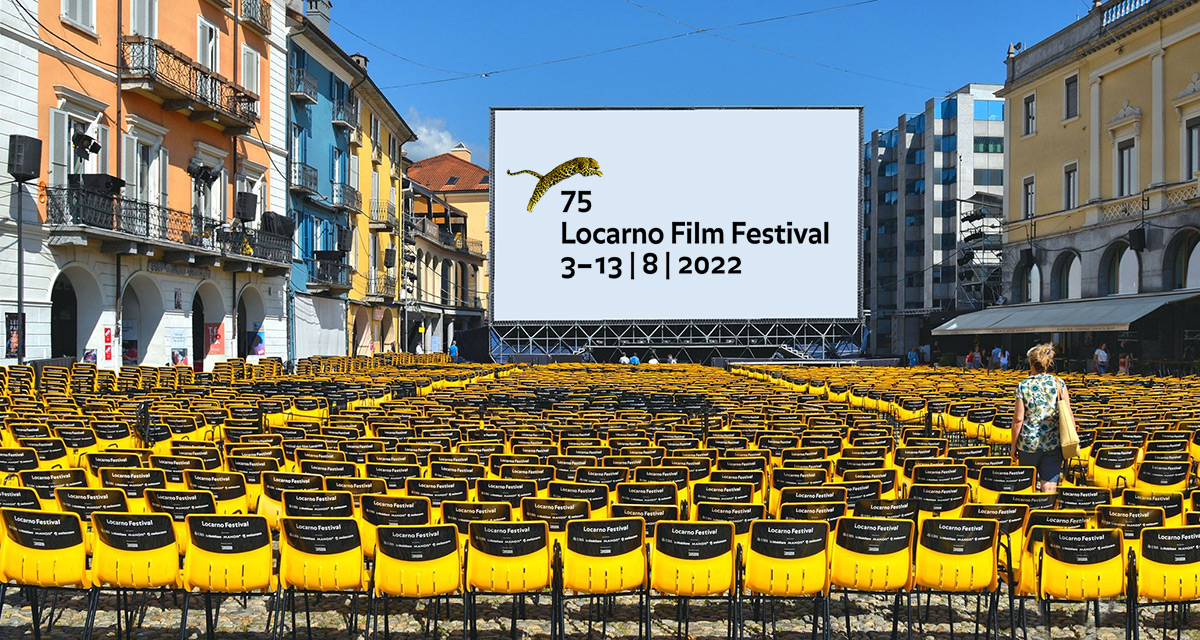 Affectionately known by the team as the “smaller of the big festivals,” the Locarno Film Festival certainly ranks among the top five. Yet, the Locarno Film Festival can in no way be considered a small event; spread across 14 different venues throughout the Swiss town from which the festival draws its name, the technical challenges are rather varied. The actual festival locations include cinemas, sports halls, general purpose halls and, of course, the 8,000 seat open air Piazza Grande.

Pulling off the festival each year requires considerable technical support which is supplied by a dedicated team of specialists to provide outstanding results. This team has also built up an enviable reputation, and is now totally trusted by Hollywood studios to deliver their product in the best of conditions.

The 2022 event included around 350 films with an estimated overall audience throughout the whole festival of over 135,000. This all adds up to quite a formidable list of technical requirements.

The technical team for sound and vision is headed up by Patricia Boillat (Head of Image and Sound) and Elena Gugliuzza (Image and Sound Coordinator), together leading a crew of 60 people. Celluloid Junkie was able to catch up with Boillat during her very busy schedule at Locarno to talk about the technical aspects – particularly audio – of the festival. But first of all, and in her own words, a bit of background on how Boillat became involved in the Locarno Film Festival:

“Back in 1988, part of my work included sound for cinema and I was also a representative for THX in Switzerland, who were then starting to make inroads into the cinema business. THX organised a ‘European tour’ to meet with cinema owners and discuss business possibilities,” she explained.

“Some people from the Locarno Film Festival were at one of the presentations and the question of sound for the event came up – and there was a growing realisation that it could be better,” she continued. “The first sites to be controlled and improved were the cinemas but with the expansion of the festival, non-cinema venues came into use and had to be transformed into temporary auditoriums. The Piazza Grande was also a big consideration, more on that later.”

Connecting the Venues
Boillat and Gugliuzza have pretty much had carte blanche in running the technical side of Locarno since 2000. The present day sees seven venues connected by fibre optics for the delivery of digital cinema packages (DCPs), with the Palexpo FEVI running in parallel with the Piazza Grande as an “overflow” location for the evening presentations – as well as hosting the Concorso Internazionale (International Competition), the Panorama Suisse and other events during the day.

The cinemas holding festival screenings now all feature the famous “THX Wall” (or infinite baffle) for the screen speakers and are carefully aligned (and treated) to have an identical phase response.

The same philosophy applies to the temporary venues, with the screen speakers being installed in a baffle and the room treated acoustically. For places such as the Palexpo FEVI, there are certain restrictions concerning the installation of large surround speakers. This is overcome by using smaller units and dedicated subwoofers placed at strategic points around the room. An extensive use of bass management is part of the system in order to achieve a full range, satisfactory response for the surround channels.

The festival has to be able to support all screening formats – 35mm and 16mm film prints, 2K and 4K DCPs and even lower resolution electronic cinema. This capacity naturally includes all sound formats past and present, together with Dolby Atmos at the bigger venue, the PalaCinema Sala 1. 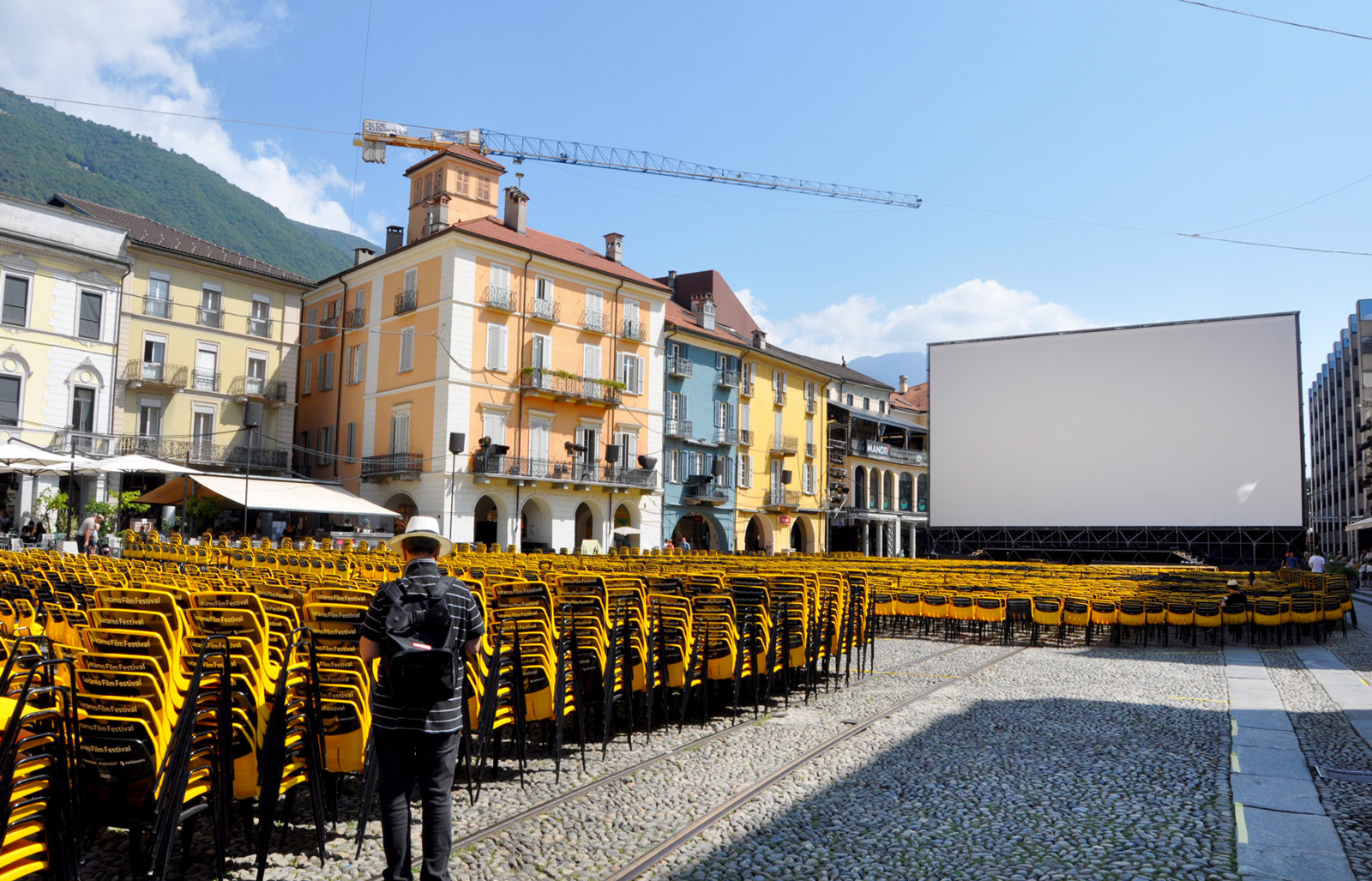 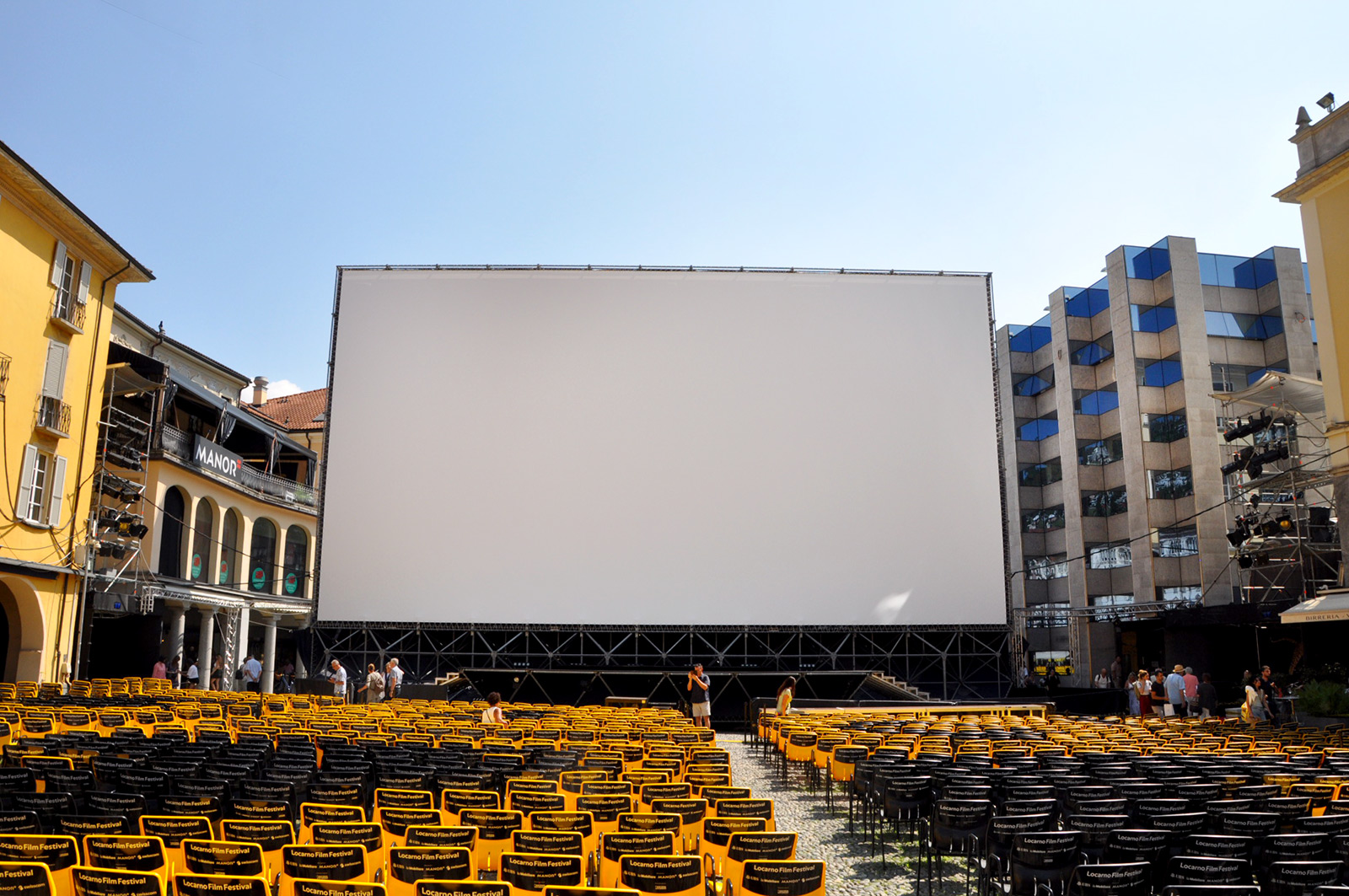 Not your average open air cinema, the space measures approximately 120 metres (394 feet) deep by 65 metres (214 feet) wide surrounded by buildings, with an audience capacity of 8000.

The screen is in widescreen format (1:1.85) and measures 26 metres by 14 metres (85 feet by 46 feet), with the lower edge being 3 metres (10 feet) from the ground and fronted by a stage for presentations. The projection throw from the “UFO-inspired” projection booth/technical centre is 80 metres (262 feet).

Open air cinema presentations tend to be a compromise at the best of times, particularly in terms of sound, and here Boillat was not prepared to do so.

She explained, “We needed to avoid all of the common pitfalls associated with open air cinema and this meant an approach more in line with high profile sound reinforcement systems but tailored to cinema.”

The screen and sound system are both incorporated into a structure that has to be built up and taken down each year. 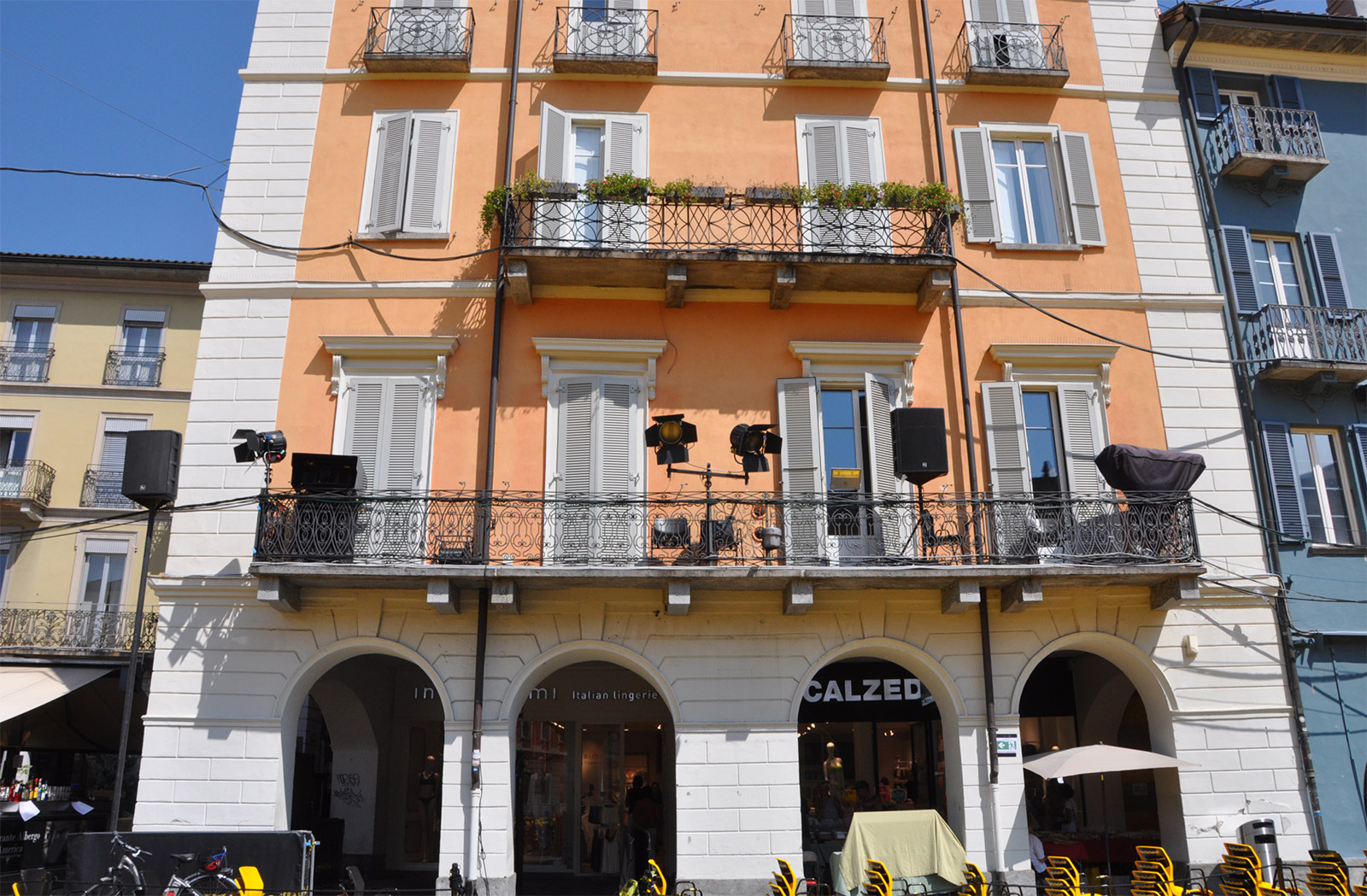 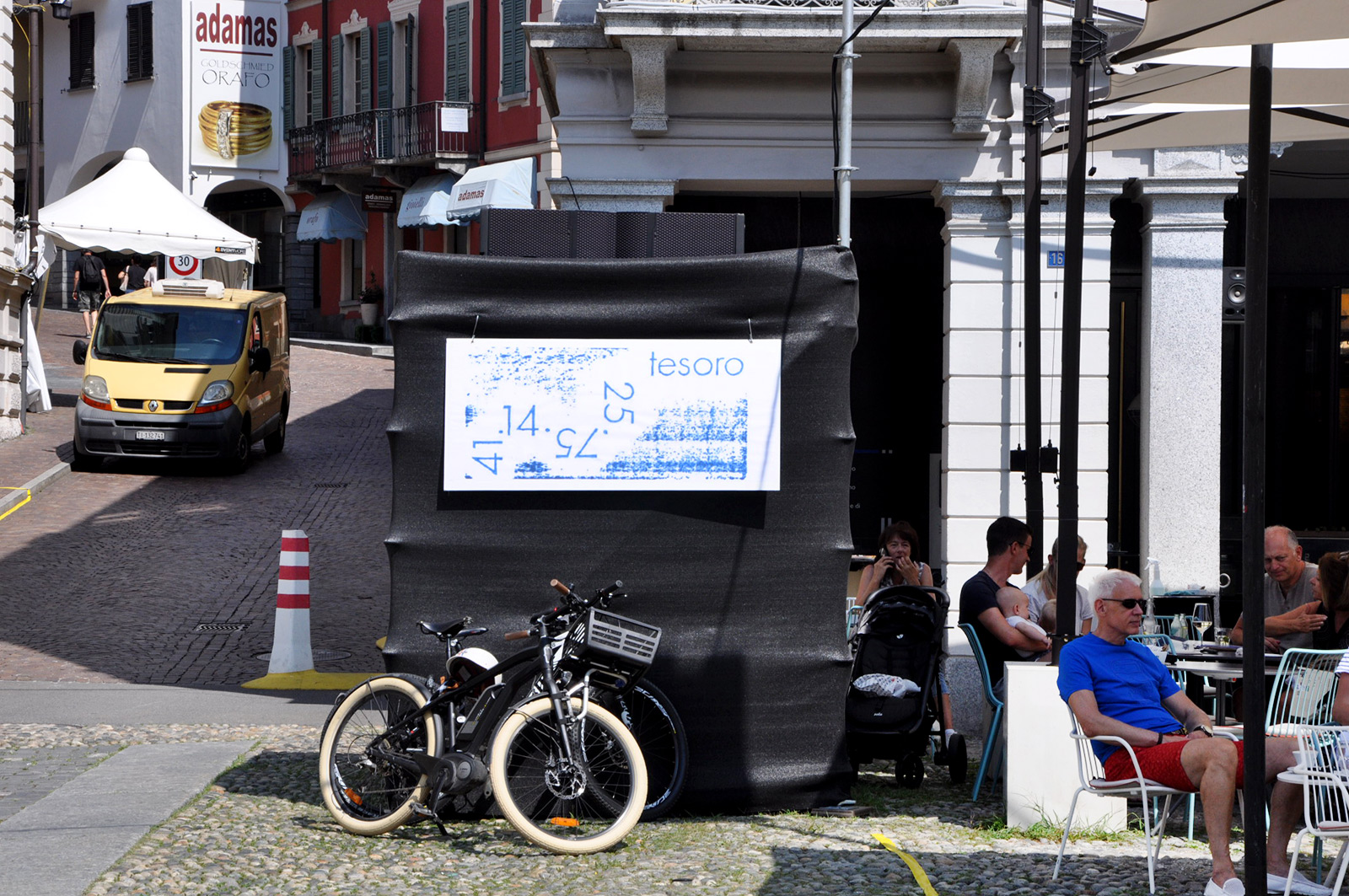 The screen systems are two-way, with twenty 15 inch (38 centimeters) speakers in a direct radiator configuration covering the low frequency range up to 500Hz and Electro-Voice HP9040 and HP4020 large format horns with manifolded DH1A drivers (two per horn) for the high frequencies. The LFE cabinets are mounted in a semi-baffle construction to provide a smooth response and to diminish resonances.

Due to the length of throw required, 90 degrees by 40 degrees and 40 degrees by 20 degrees (horizontal x vertical degrees) dispersion patterns are combined to handle long-throw and nearfield/mid-throw coverage. The aiming and tuning of the horns is calculated to provide an overlap point of the coverage in order to create a seamless transition between the zones and a “best seat in the house” performance for the whole audience.

The audience also serves as a wide-range acoustical absorber to diminish reflections from the buildings surrounding the piazza and this, combined with precise pattern control from the speaker systems, is very effective.

The provision of five screen channels means that both 5.1 and 7.1 formats are covered and, in the case of 5.1 content, the Left and Right channels can be bled into the Left-extra and Right-extra channels in order to provide a more homogenous sound. 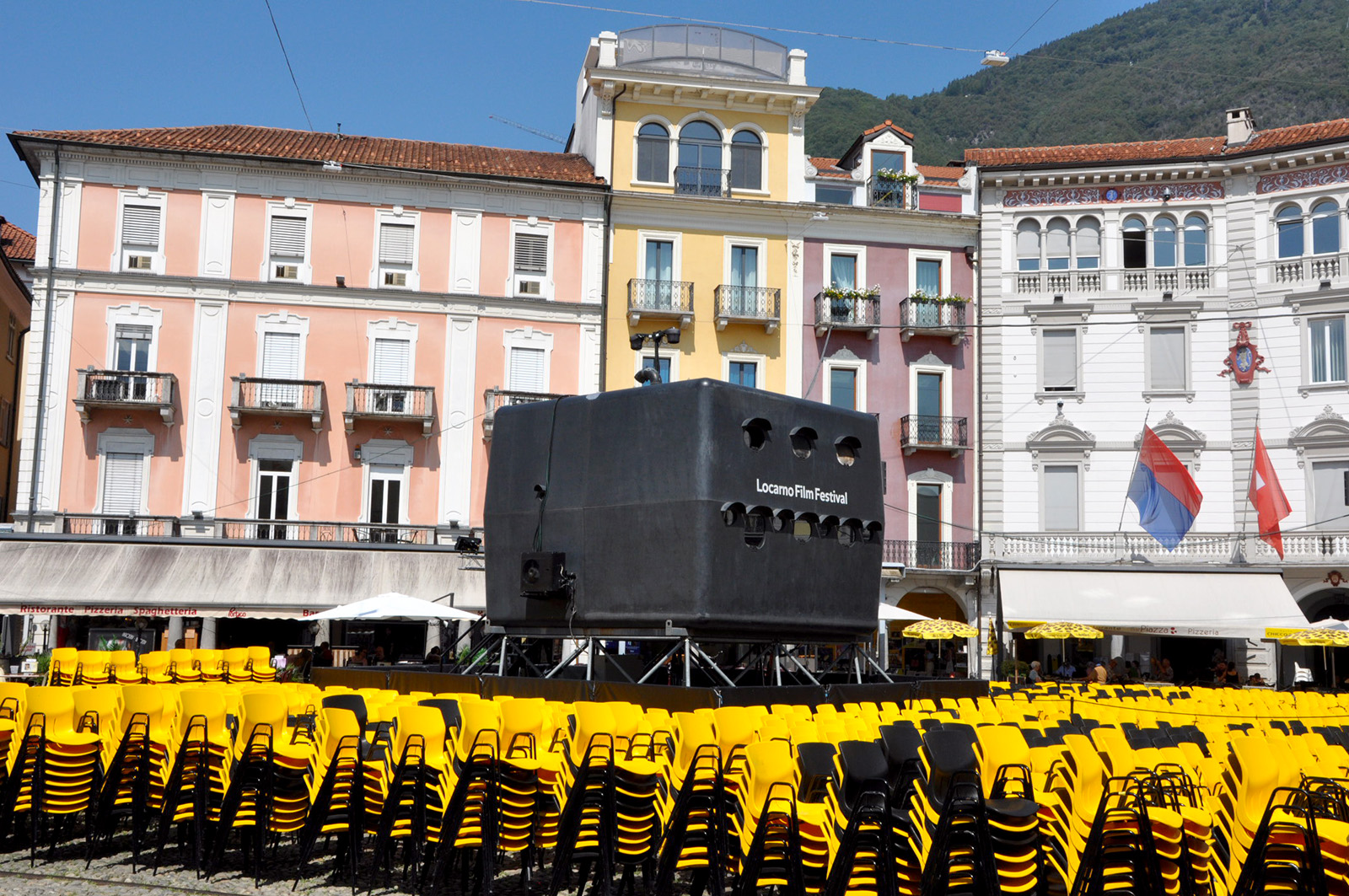 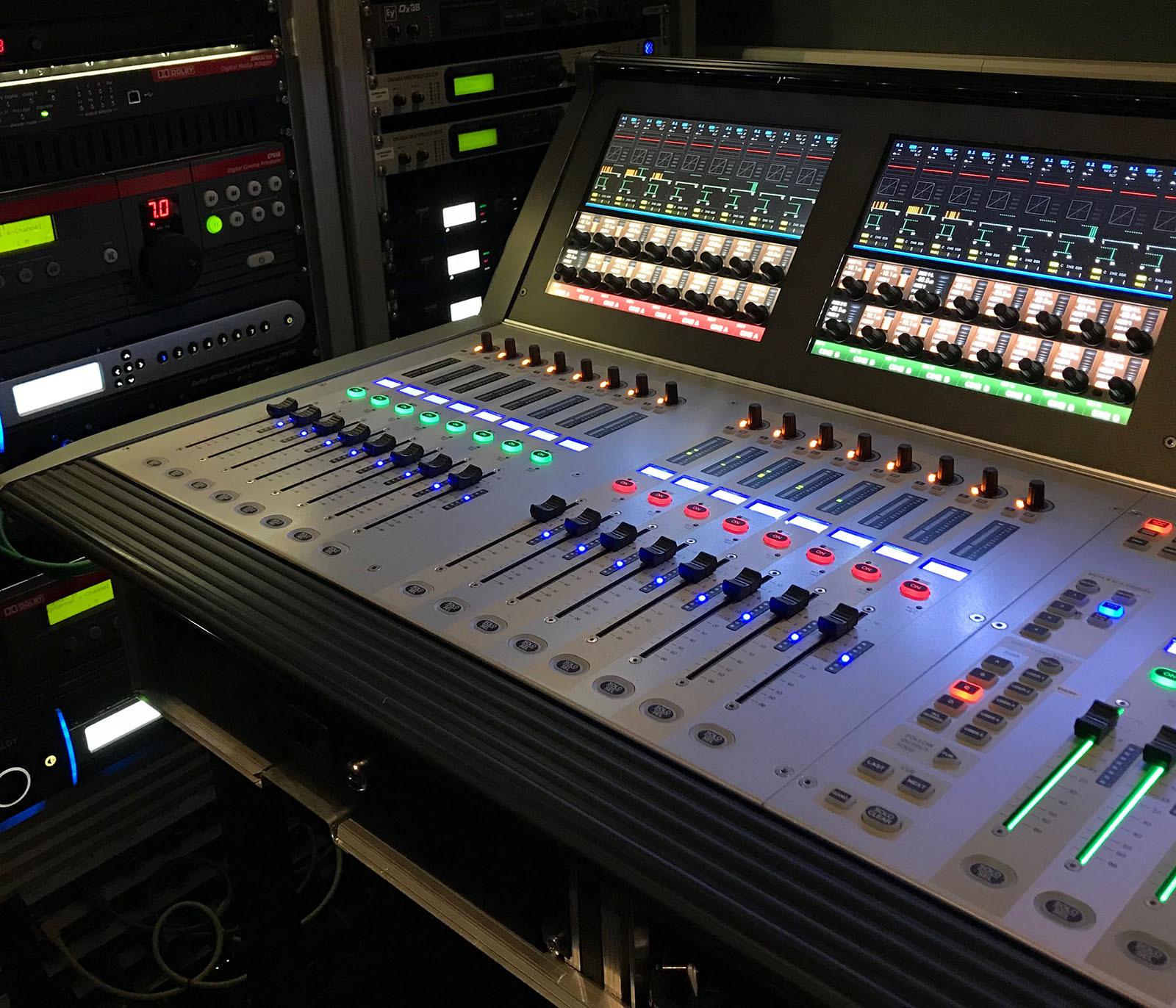 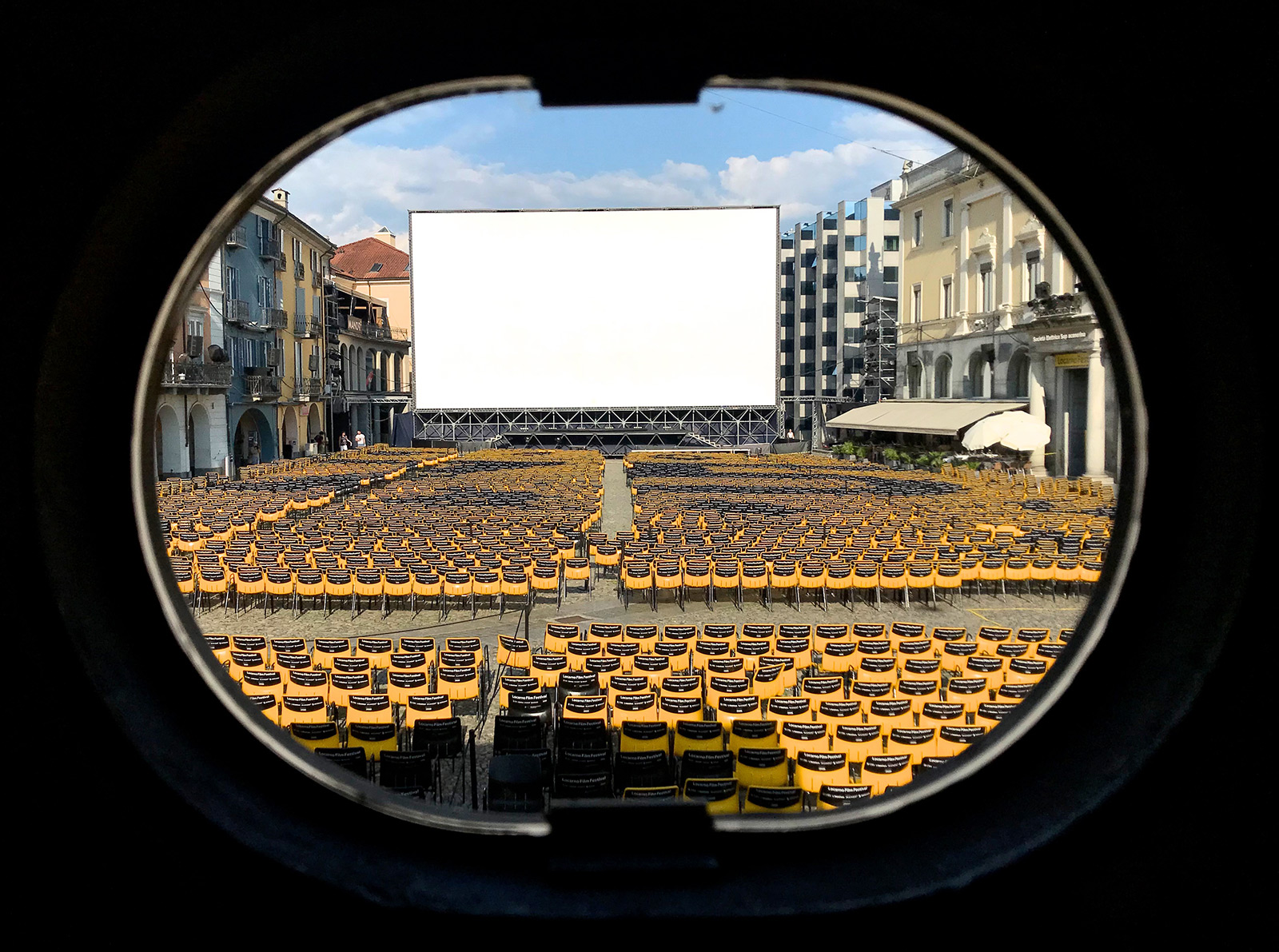 The subwoofers for the LFE (and bass management content if required) are in a custom configuration. Twenty 18-inch drivers are individually mounted using transmission line technology. This sophisticated ‘tunnel system’ gives a tightly-controlled bass response (25 – 160HZ) for greater precision in the low frequencies. As with the main system, this installation has to be built up and disassembled at the end of each festival.

The surround channels consist of eight large-format Electro-Voice speakers mounted on poles – or balconies! – per each side of the Piazza Grande. Each speaker has its own delay, EQ and level settings in order to provide an enveloping surround experience.

The low frequency channel is not forgotten either and this is reinforced with four subwoofer assemblies placed around the piazza.

The heart of the system is the “Blackbox” that is the projection/technical booth at the back of the audience area. This houses the projectors, the AV control systems and a Soundcraft large format digital mixing console for the overall control of the different audio sources.

All of the source material for the festival is rigorously controlled in one of the festival cinemas and representatives of the studios are sometimes present to give their approval – which is always the case! We can mention here that the aim is to have all of the presentation venues as closely matched as possible and the Piazza Grande is no exception. 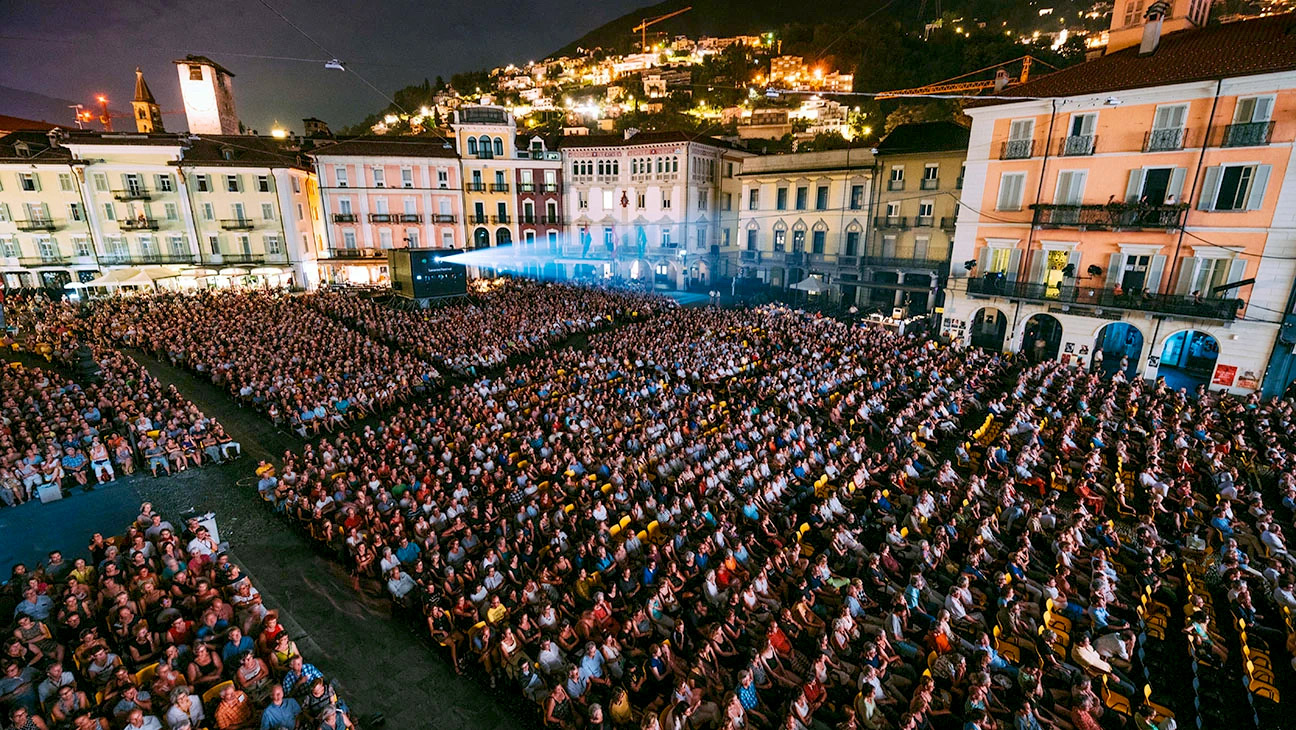 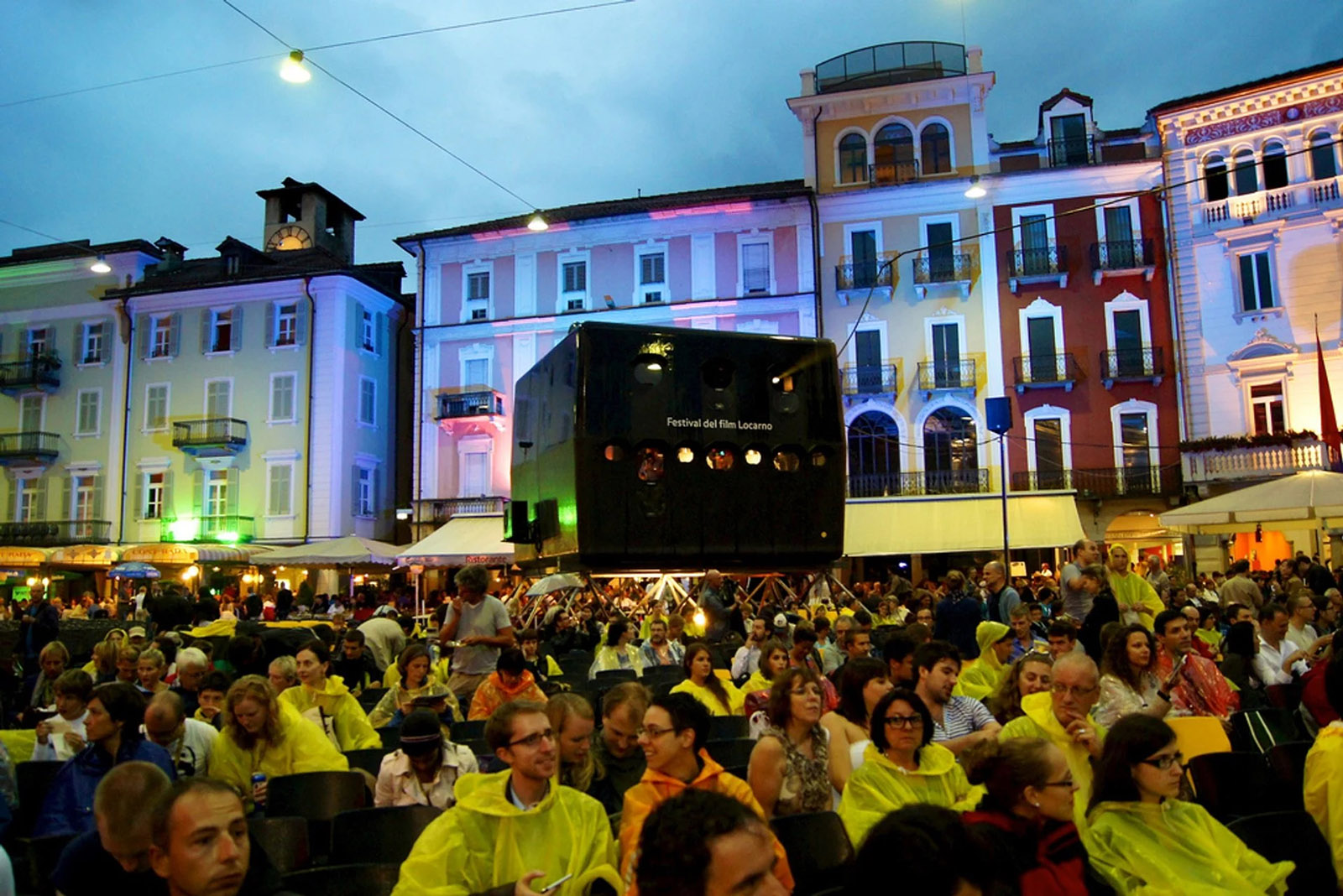 Experiencing It In Action
A thorny question these days concerns volume level: the answer would appear to be whatever is appropriate for the presentation and venue rather than staying with a fixed level. No problems were experienced with this method.

During our short stay, we were able to attend three screenings on the Piazza Grande and these ranged from a thriller to local drama to a filmed concert. In all instances, the system performed admirably. Special attention is given to the dialogue response but even with the best technology, poorly-spoken dialogue cannot be retrieved.

The opening film on the Piazza Grande was “Bullet Train” and by all accounts, the sound was more than up to expectations for such a blockbuster.

The music response proved that the system can perform as a large-scale concert rig and this makes it fully suitable for event cinema content (such as the live broadcast of musical, and other, events). 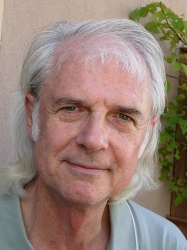 Terry Nelson
Owner at Studio Equipment
Terry has followed a dual career in pro audio and as a musician, as well as being a technical journalist for “Studio Sound”, “Broadcast Sound”, “ProSound News” and other leading industry publications. He is the owner of Studio Equipment, based in Switzerland, offering expertise in audio systems and acoustics.