Celluloid Junkie is proud to have partnered with Vista Entertainment Solutions (VES) for the Cinema of the Month series. Vista is the world’s leading cinema ticketing and software solutions company. We won’t just be featuring cinemas whose operators use Vista, but we will surely mention when that is the case. CJ would like to thank everyone at Vista for enabling us to showcase some of the most interesting, innovative and inspiring cinemas from around the world.

New York City is not just an iconic film location, but has also long been a haven of cinemas devoted to independent and arthouse film. Yet rising rents and a changing retail landscape has closed several Manhattan-based cinemas such as the Ziegfeld Theater, Clearview on First and 62nd, Lower Eastside’s Landmark Sunshine, Angelika 57 and many others, leaving the likes of the Tribeca Film Centre and the Quad looking imperilled.

The situation got so bad, that Time Out New York recently declared that, “When it comes to movie theaters, NYC doesn’t exactly have an embarrassment of riches.” So the wave of new exhibitors such as Cinepolis, iPic, Alamo and the expanded NiteHawk opening screens in the greater New York area in the last few years is particularly welcome. Yet none of the new cinemas quite rival the Lower East Side’s Metrograph, which has created the atmosphere of a private club devoted to the world of classic and art-house film. The setting combines elegance and nostalgia. Experience the best of the past in vintage film or the newest digital features here. 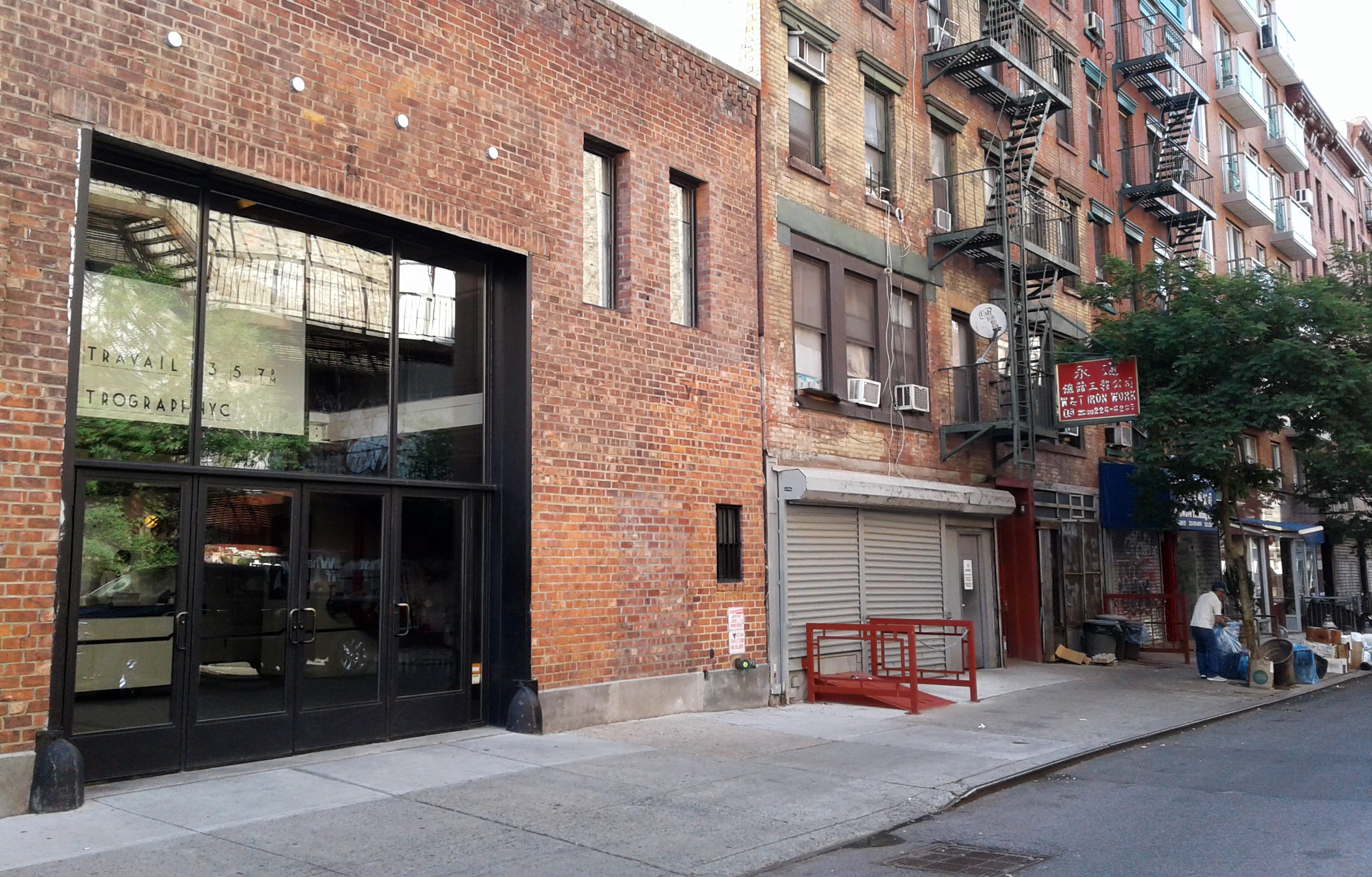 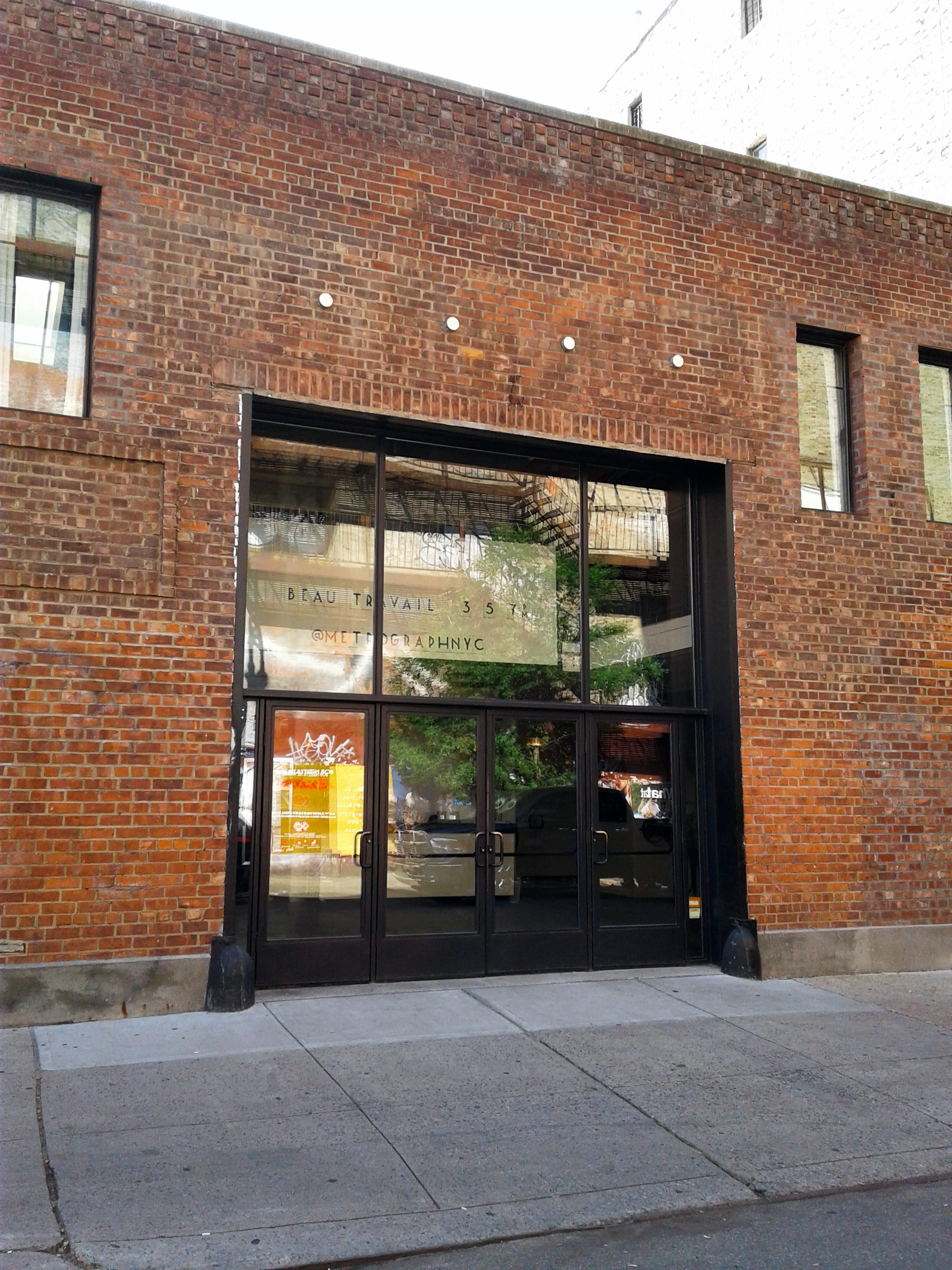 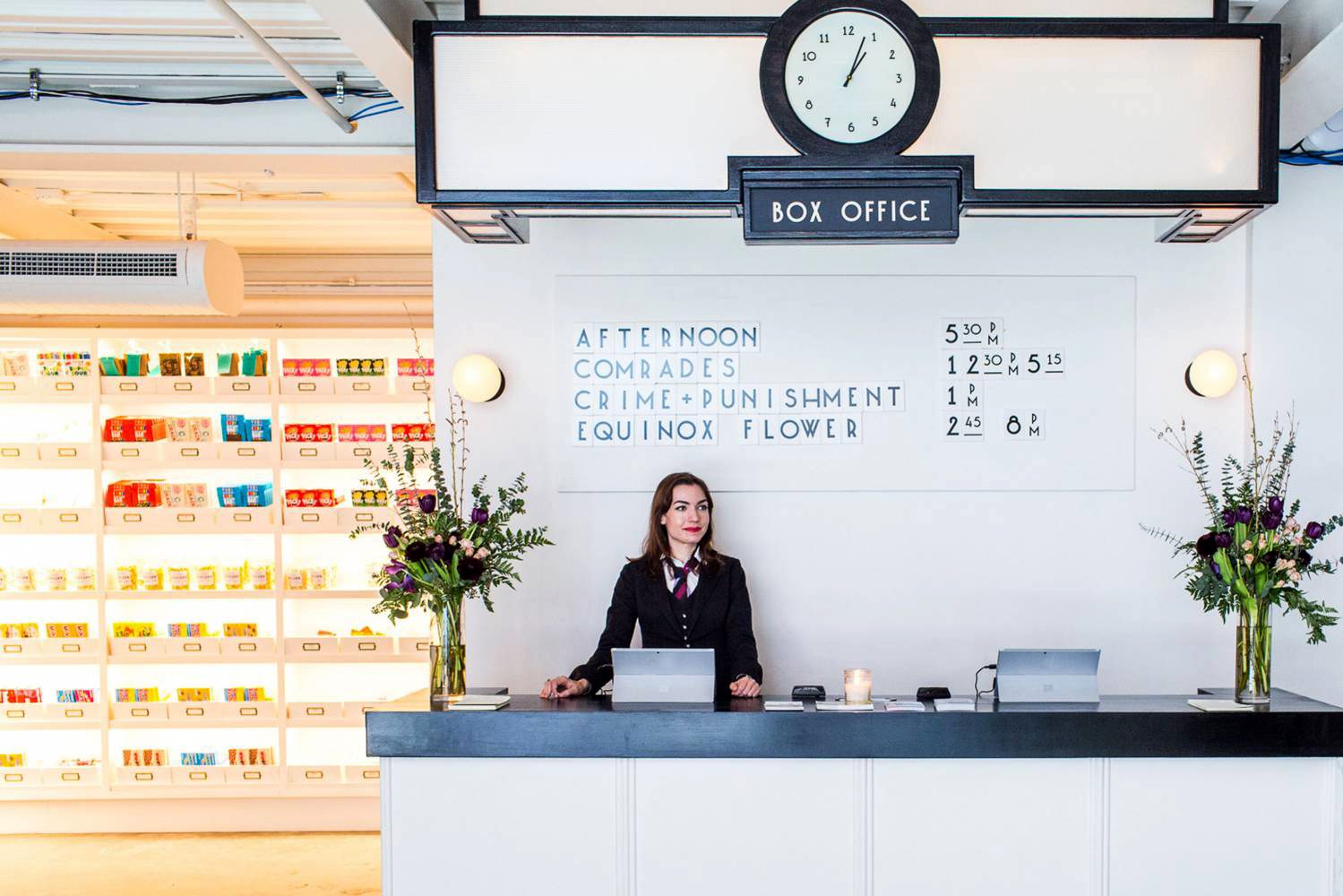 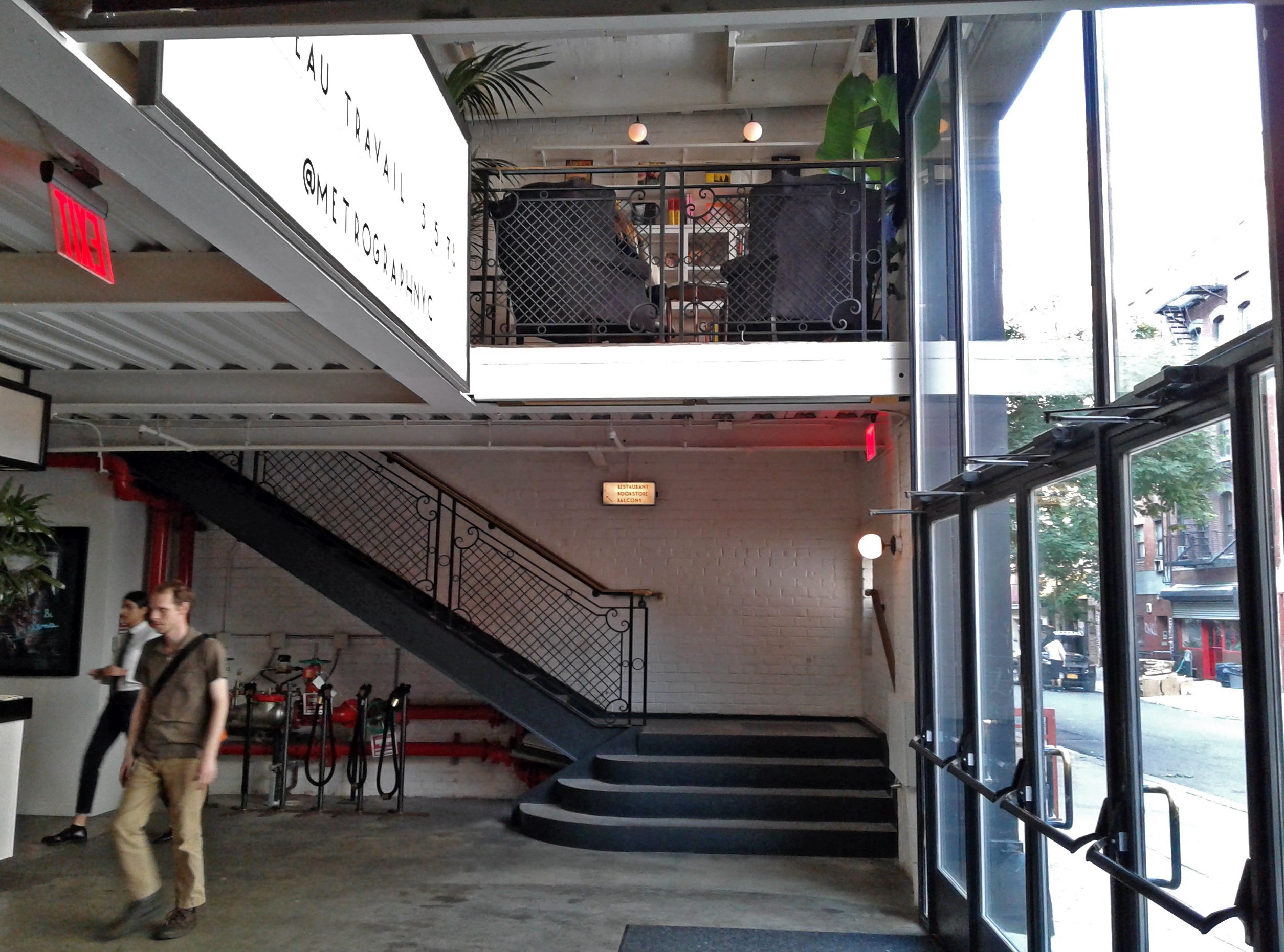 Metrograph has been designed so that one can not only see a film but talk about it in a splendid setting afterwards. Eat lunch, have a drink, eat dinner, meet friends. Sit in a tiny library in a comfortable chair and peruse books devoted to cinema. Indeed, “design” may be the most apt word to association with Metrograph. It’s founder is Alexander Olch, a polymath best known as a fashion designer of neck ties.  Therefore it should come as no great surprise that Metrograph is dripping in hipness.

A first impression of the theatre is ‘where is it?’ as it’s easy to walk past number 7 Ludlow Street in Manhattan with its simple flat glass exterior set in dark red brick. This is definitely not the ornate rococo palace of entertainment one might expect. The Lower East Side neighborhood is rough, gritty, mostly Asian; it is a few square blocks of wholesale fish markets and food shops, a tattoo parlor, and tiny restaurants. Metrograph, which opened in March of 2016, fits in perfectly.

There is no marquee, no sign announcing that it is, in fact, a movie theatre. There is no sign at all. Instead, the façade of Metrograph is rather like a garage door. Upon entering one sees the box office which is a simple black and white desk with an old-fashioned clock hanging above it. Potted palms stand like sentinels on either side. The lobby ceiling soars two stories high.

The staff is young and attractive and seem to love working in that atmosphere. There are ushers to show one to their reserved seat which cost USD $12 for matinees or USD $15 for evening showtimes. Metrograph has a rule of not admitting patrons 15 minutes after a film has started, a policy that is becoming more popular in high-end cinemas. 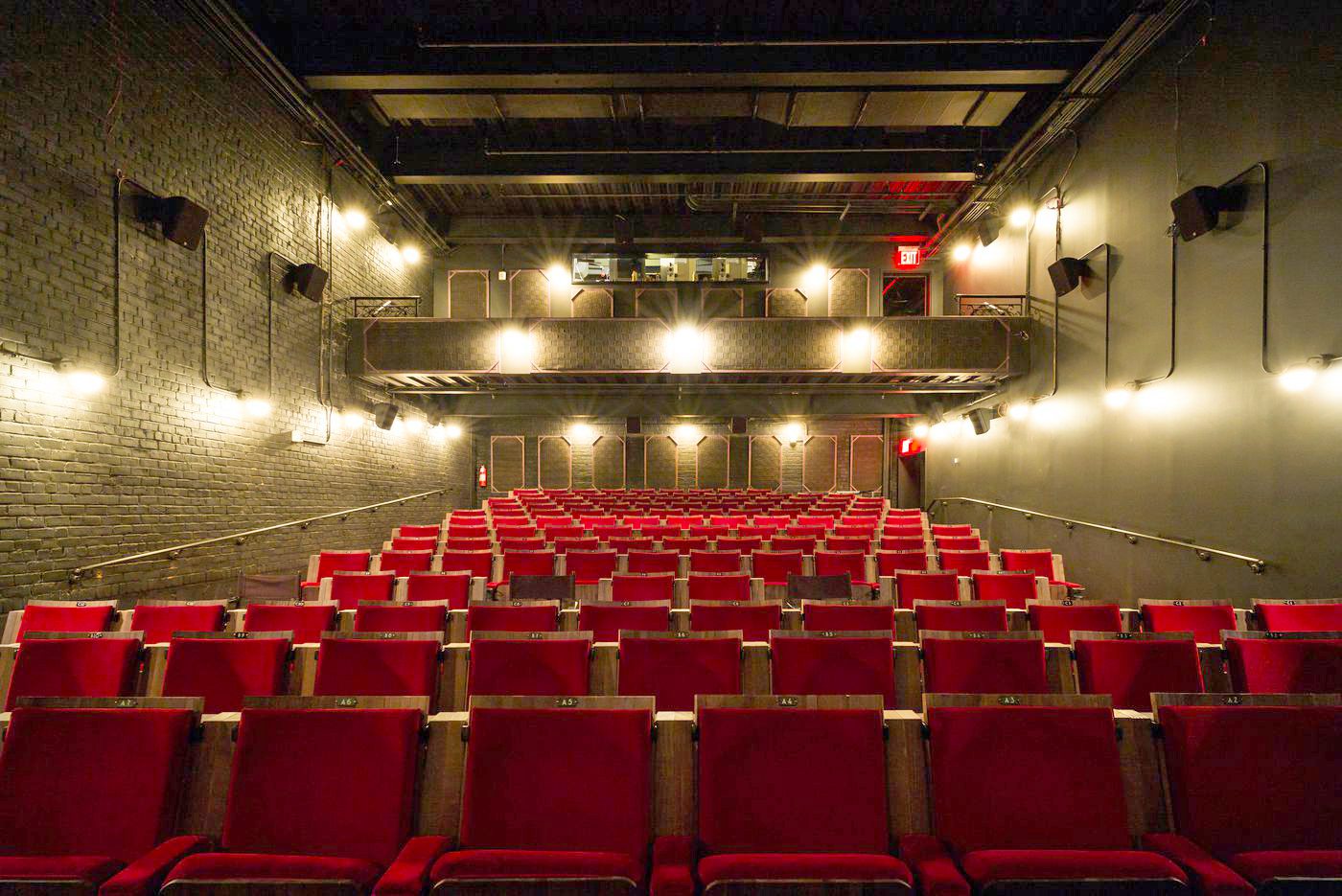 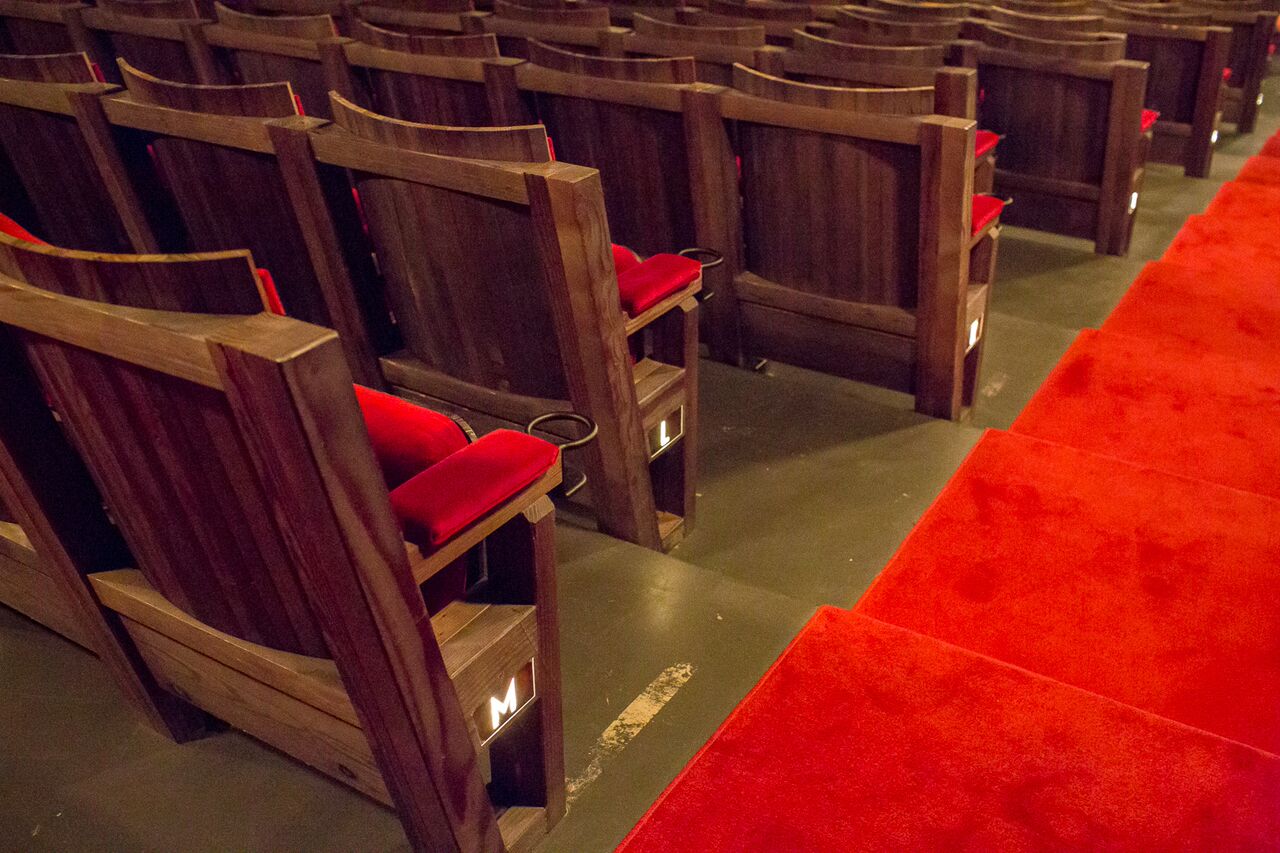 The Auditoriums
There are two theatres; one seats 175 (of which 23 are on the balcony) and the other seats 48. The larger theatre has a balcony where one can see the projectionist at work in his booth above it all. The chairs are made of wood recycled from the old Domino Sugar Refinery in Brooklyn; every detail evokes the romance of the past.

The Metrograph offers both premiers of digital video and rare archival 35 mm film screenings; there are foreign films and first-run movies. I saw “Beau Travail” in French in the larger theatre and thought the cinematography in the Claire Denis film was nothing less than spectacular. Djibouti in all its splendor. The sound was also very good.

Meanwhile, Metrograph’s ongoing film series focus programming on specific actors, filmmakers and themes. For example, beginning in May and running through mid-July Metrograph was playing 19 films featuring Marlene Dietrich. The possibility of submerging oneself in the brooding Berlin sex symbol in all her black and white glory is fabulous!

In June, four films in 35 mm, imported from France, showcased the work of director Robert Bresson. Three short films by Elliott Erwitt, the legendary street photographer, will be shown one night only this month. Four films by the Japanese master, Yasujiro Ozu, opened in late May.  From “Silkwood” to “Gosford Park” to the “Misfits,” Metrograph offers an extraordinary range of movies.

The Candy Shop
To the left of the box office is the Candy Shop offering typical, though curated, movie snacks, all sleekly packaged and arranged on easy-to-reach shelves. The popcorn, pre-wrapped in cellophane bags, comes in Spicy, Cacio & Pepe, and Bonito flavors. There are Belgian chocolates beside the old standbys like M&Ms. A glass-fronted refrigerator offers bottled water and soft drinks. It’s all self-service. 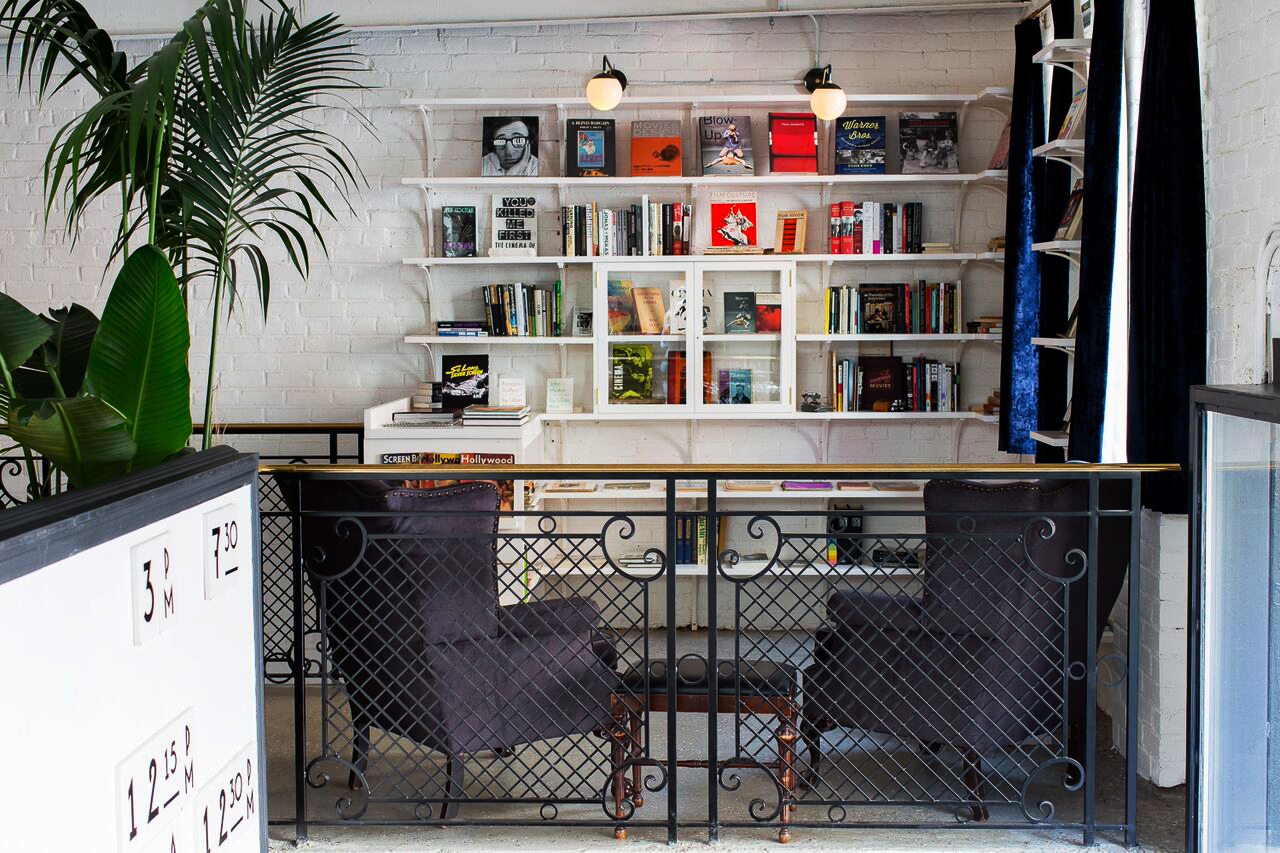 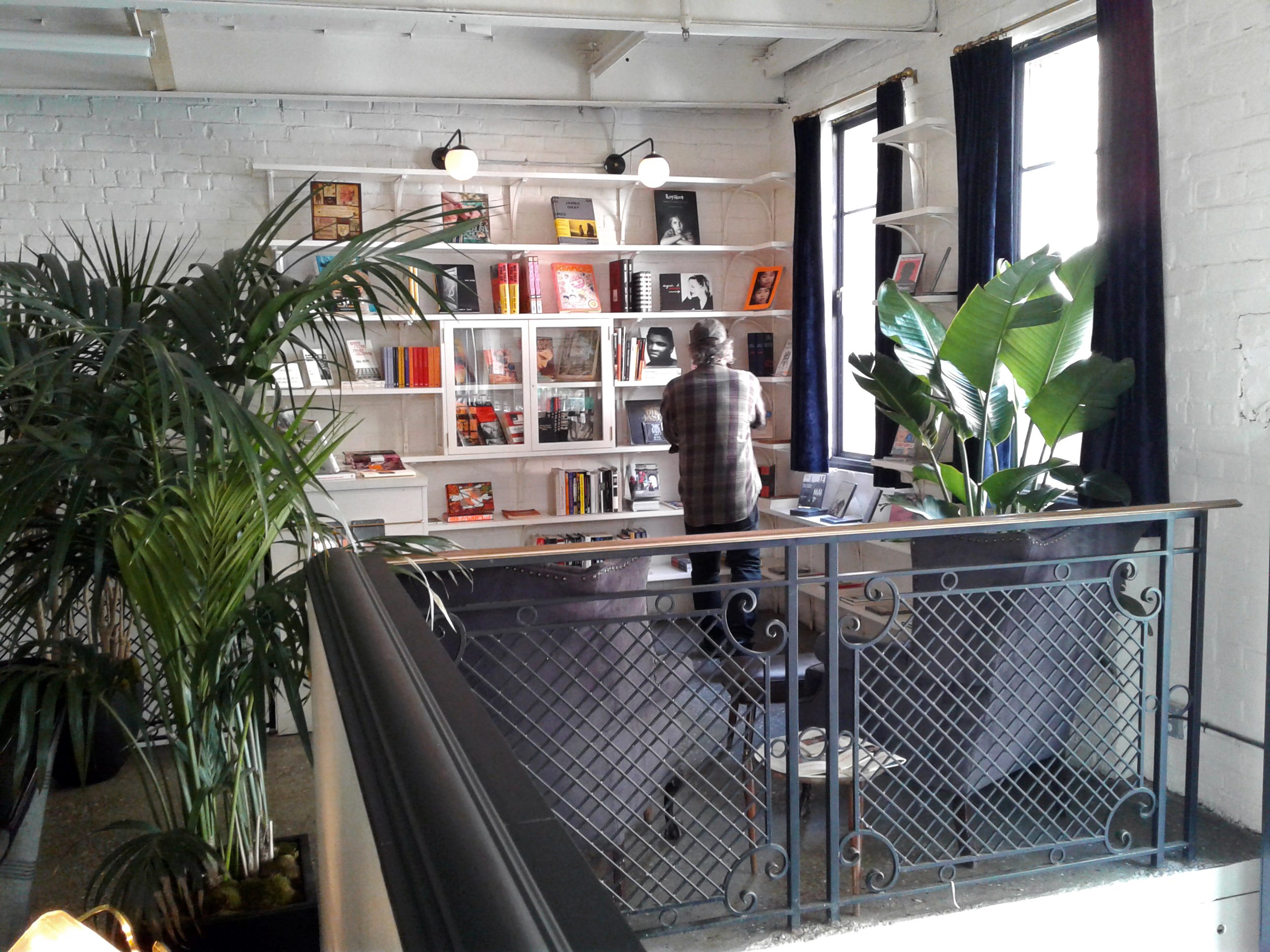 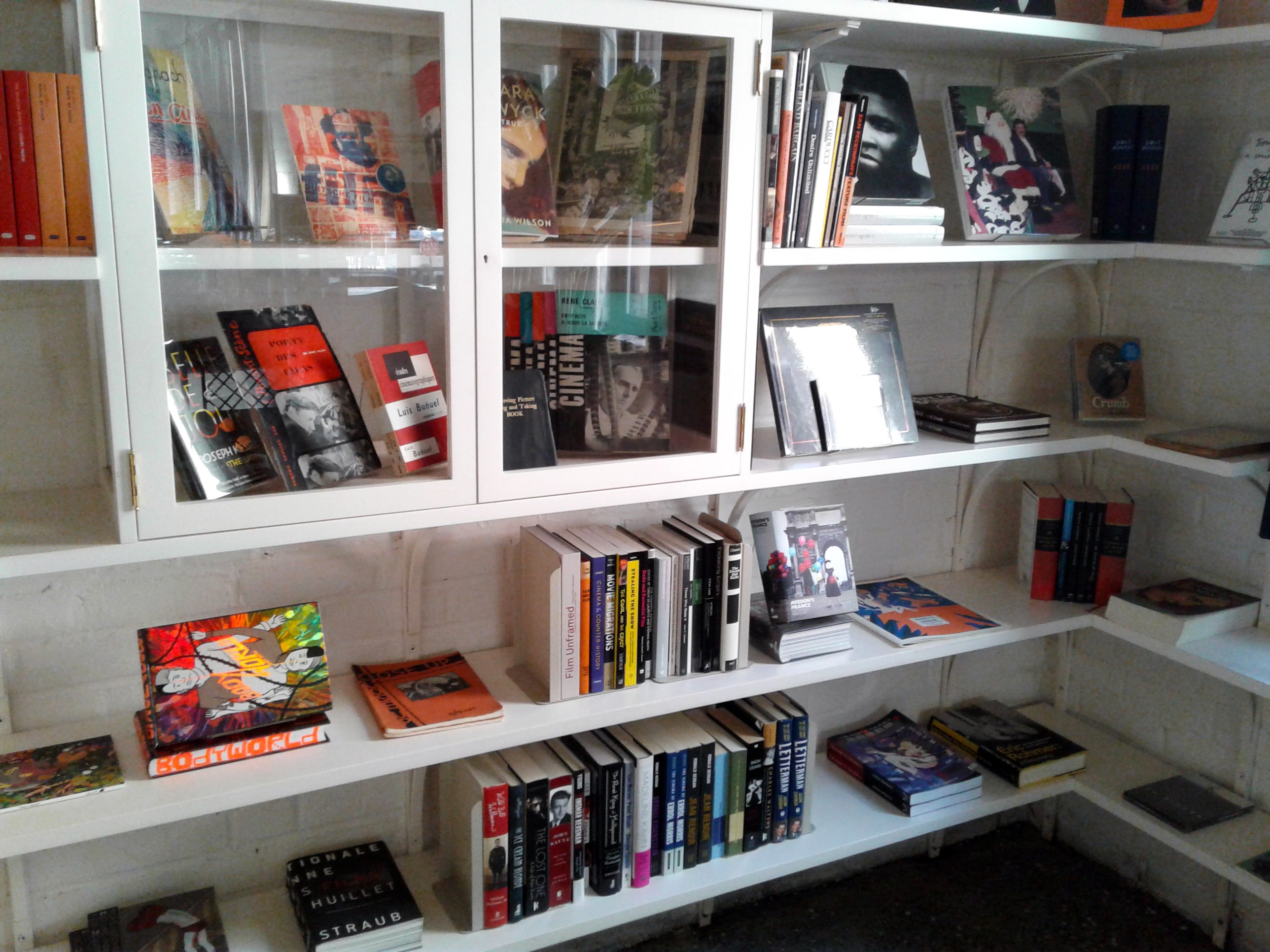 The Book Store
To the right of the box office, stairs ascend to a balcony level, where the Metrograph Book Store resides resembling less a commercial endeavor than a personal library. Stocked with both first edition biographies of film history legends and the latest in film periodicals, one is encouraged to linger. It’s irresistible.

A pair of big velvet-upholstered wingback chairs and footstools beside two tall windows makes the corner inviting and very bright. A large potted plant conveys the ambiance of a hotel lobby in the 1930s. Nearby three people huddled over a laptop on a coffee table flanked by sofas.

The Commissary
The Commissary, also on the second floor, is open from 11 o’clock every morning for breakfast and lunch until 4 p.m. Brunch is served on weekends. The restaurant is meant to evoke the commissaries on Hollywood studio lots where movie stars once ate alongside the cameramen, make-up artists, carpenters, stagehands, and hairdressers.

A Writer’s Menu is offered every day during breakfast and lunch hours. The Writer’s menu was created so that one could eat with one hand and take notes with the other. It offers such dishes as chicken liver pate, brie and bousin, saucisson sec, and apples with almond butter. 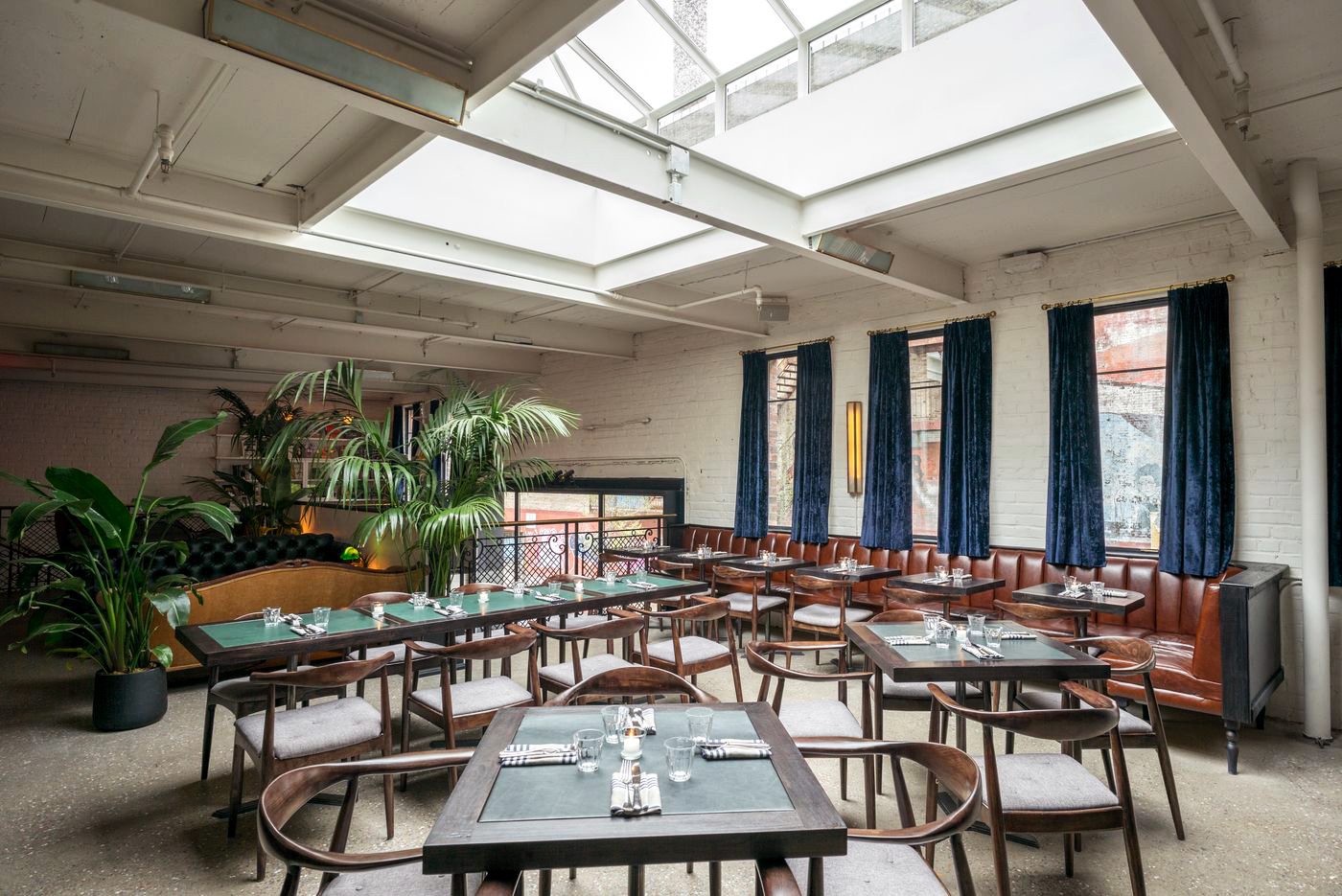 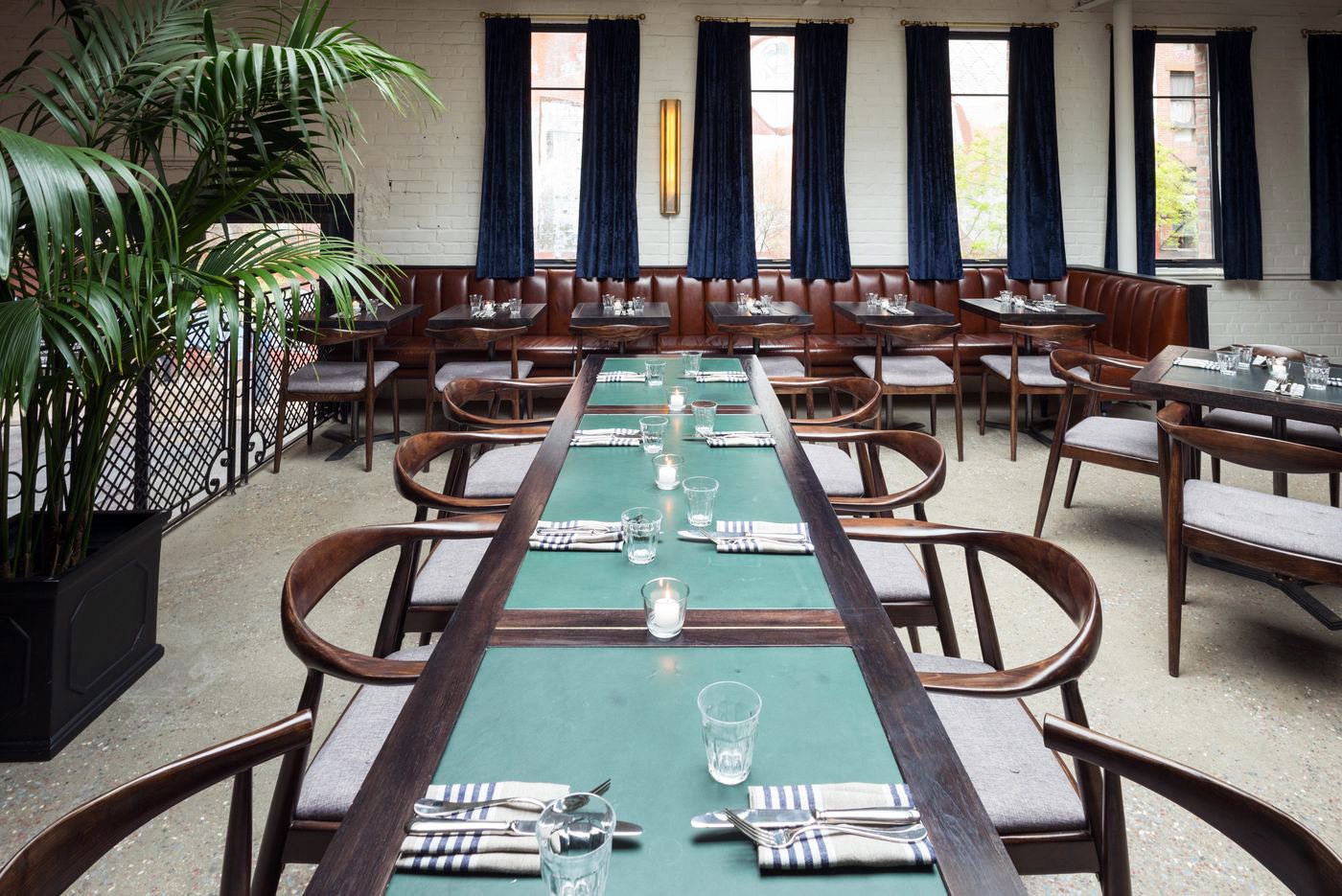 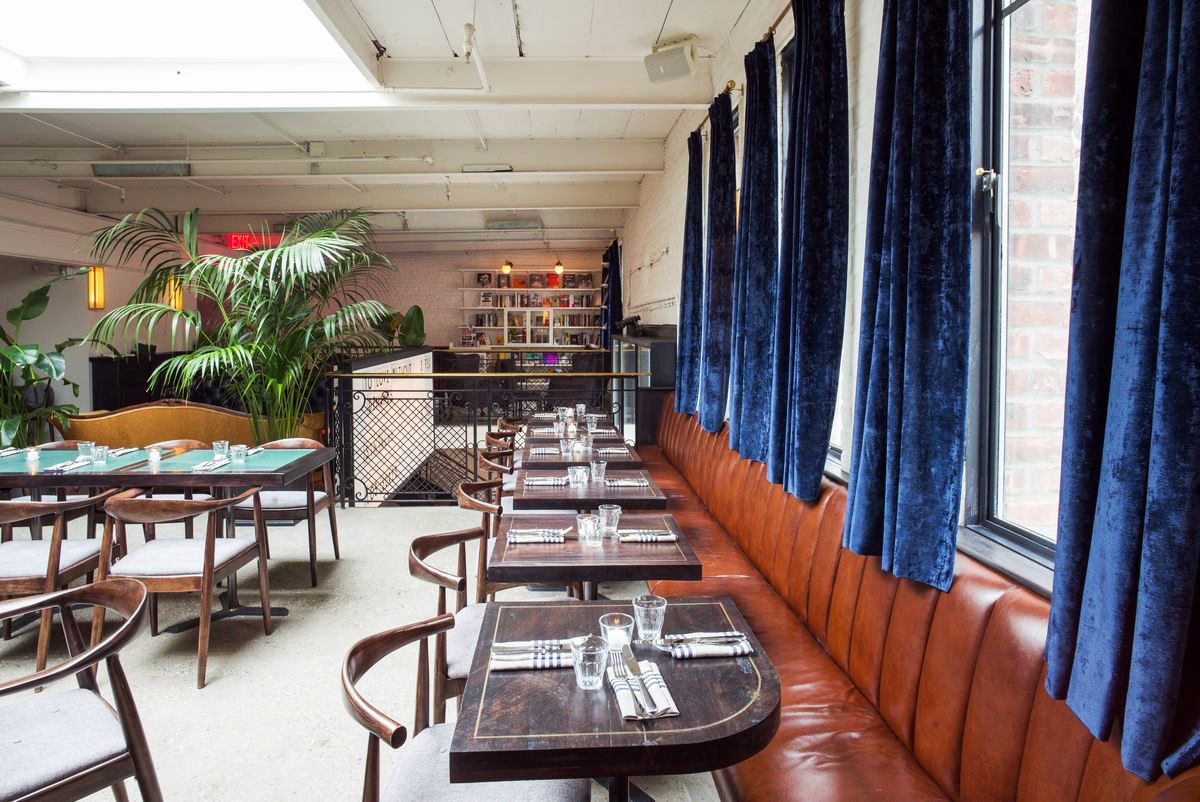 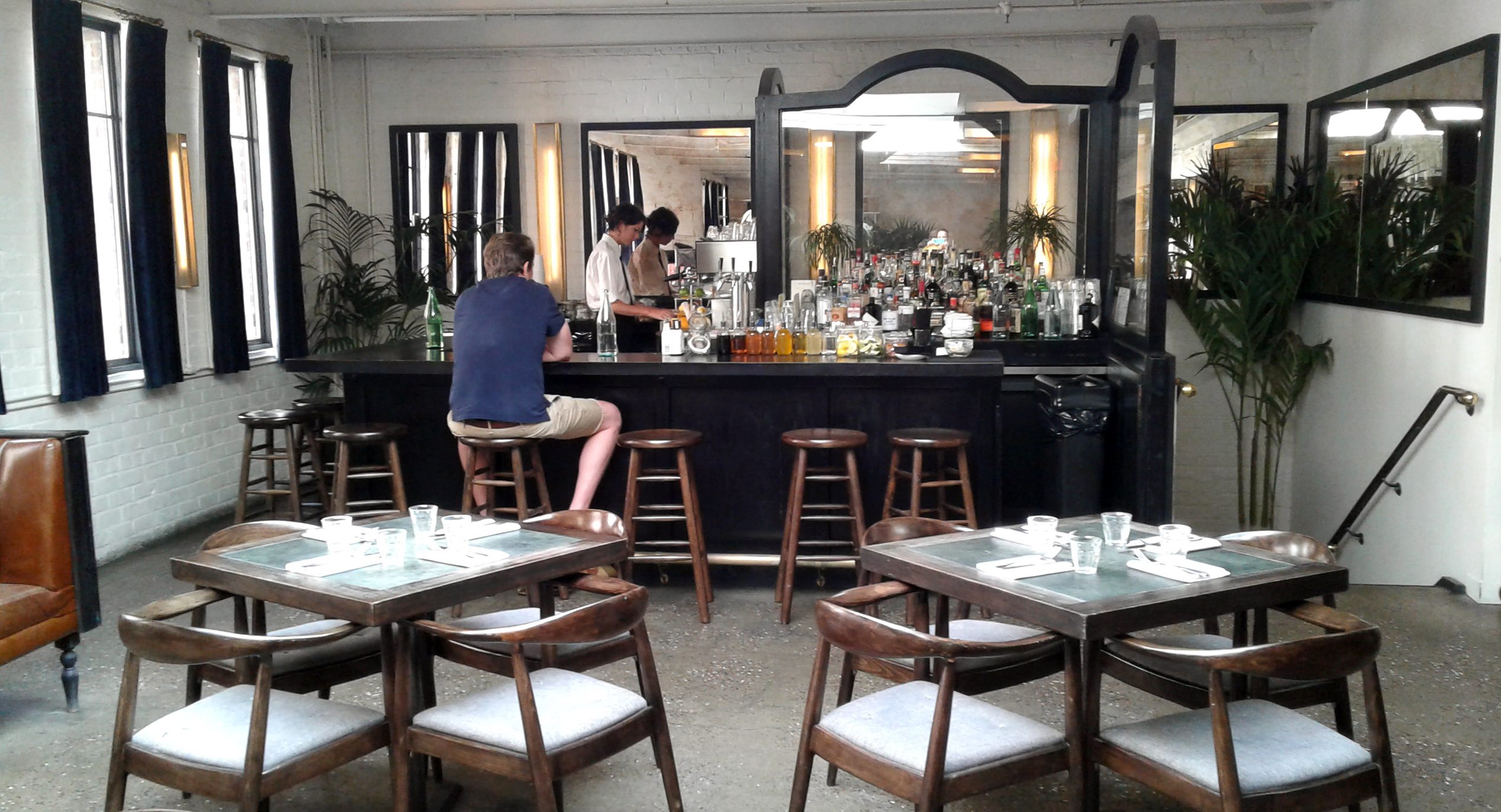 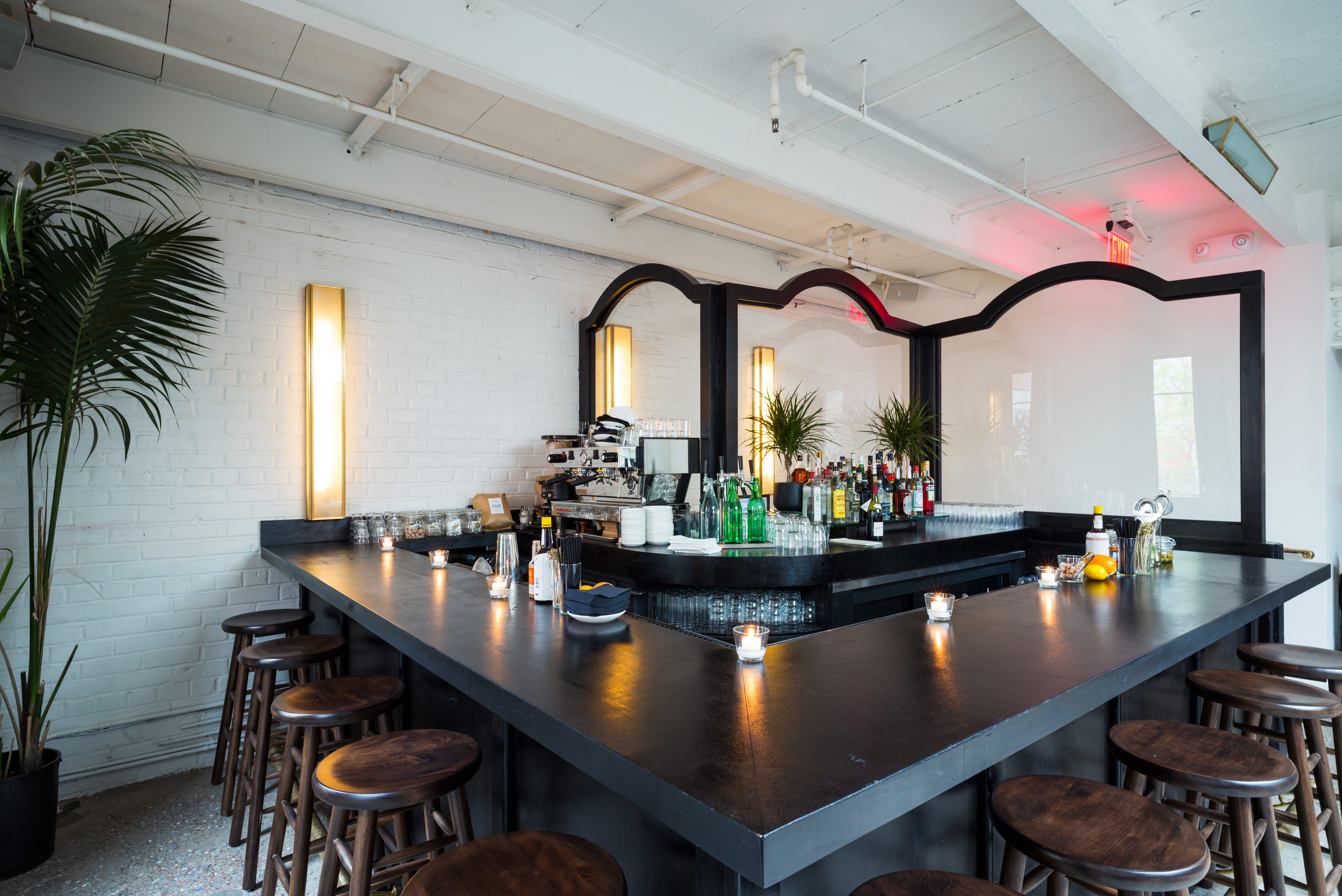 From 6 p.m. to midnight dinner is served daily. The dinner menu features such standards as steak tartare and seared tuna, but also sardines with sweet and sour spinach, as well as garlic and white beans.  Salads on the menu include Caesar, fava bean, and endive or one could order a Jack Lemmon which contains sunflower seeds and radishes. For entrees the Commissary serves sea bass, lamb, chicken fra diavolo, and popular standbys like spaghetti pomodoro.  Prices are reasonable ranging from USD $18 for the pomodoro to USD $29 for the lamb or steak frites.

The setting is fresh, sun-filled in the daytime, and both casual and sophisticated.  Banquettes covered in chocolate-brown leather line a wall to the right. Dining tables occupy the center of the room and there is a bar with stools at the far end which is open everyday during dinner service. From Thursday through Saturday one can buy drinks until 2 a.m.; there is a second bar in the ground floor lobby area with the same hours.  The Metrograph maintains its cinematic cred in naming its cocktails after movies; the Zhivago, the Night of the Iguana, the Harlem Night, the Sunset Boulevard, and Tender is the Night. 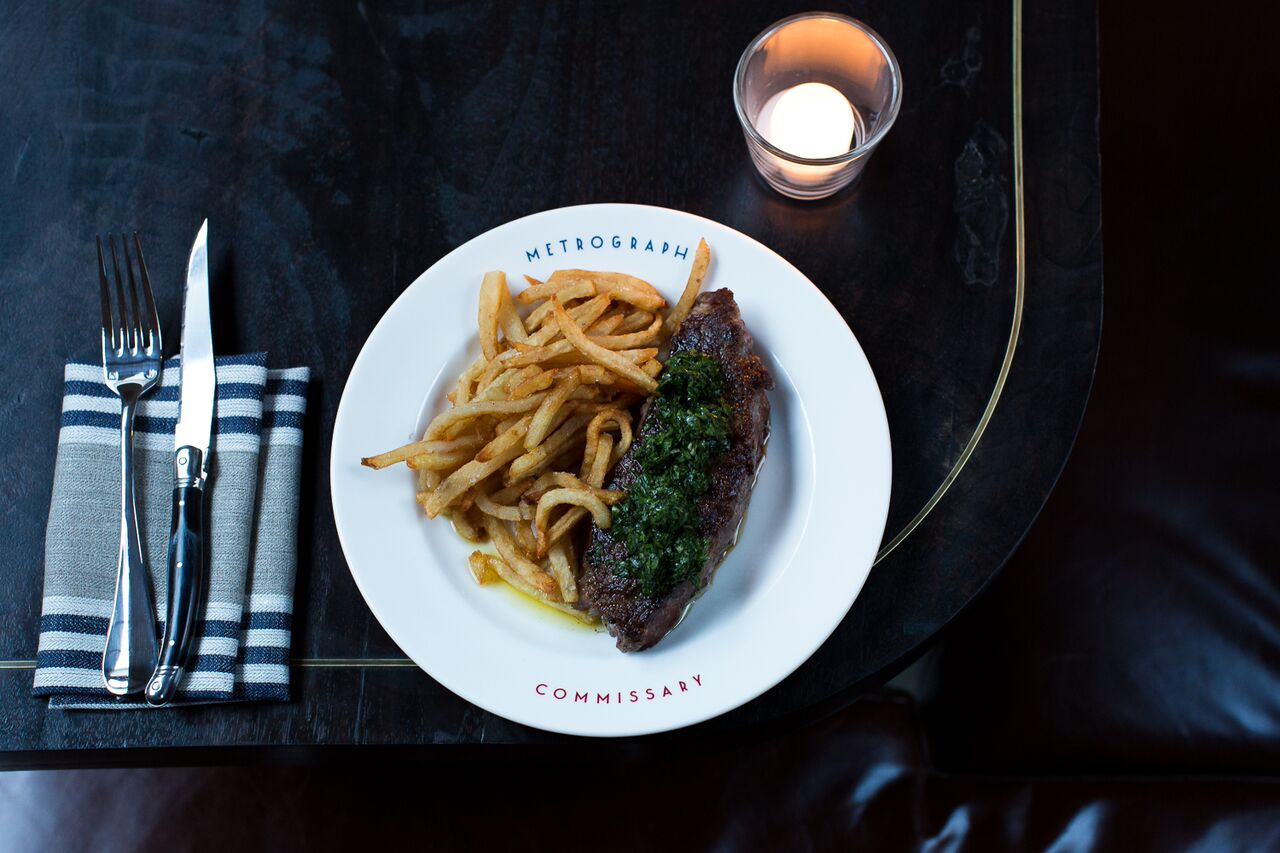 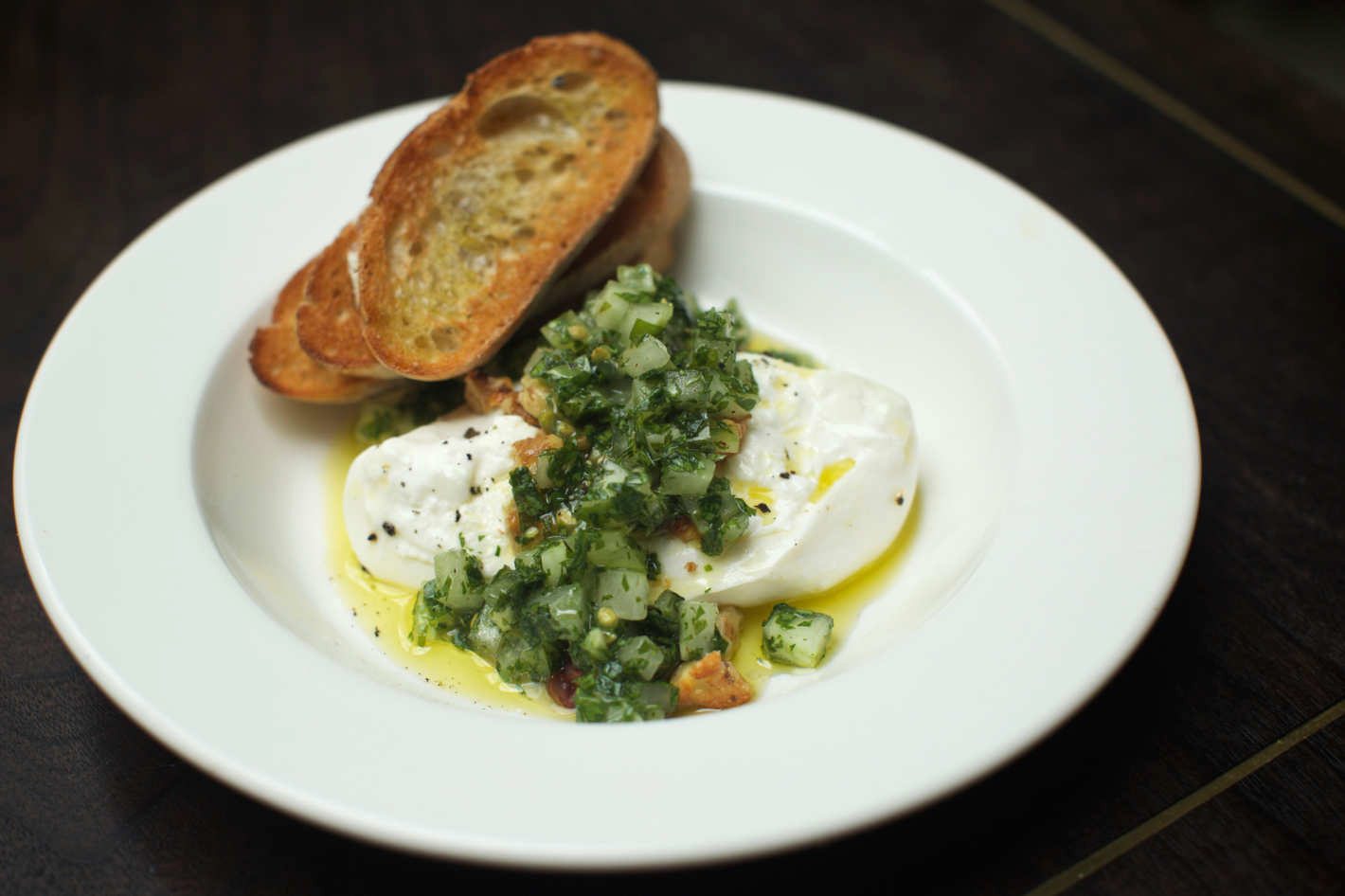 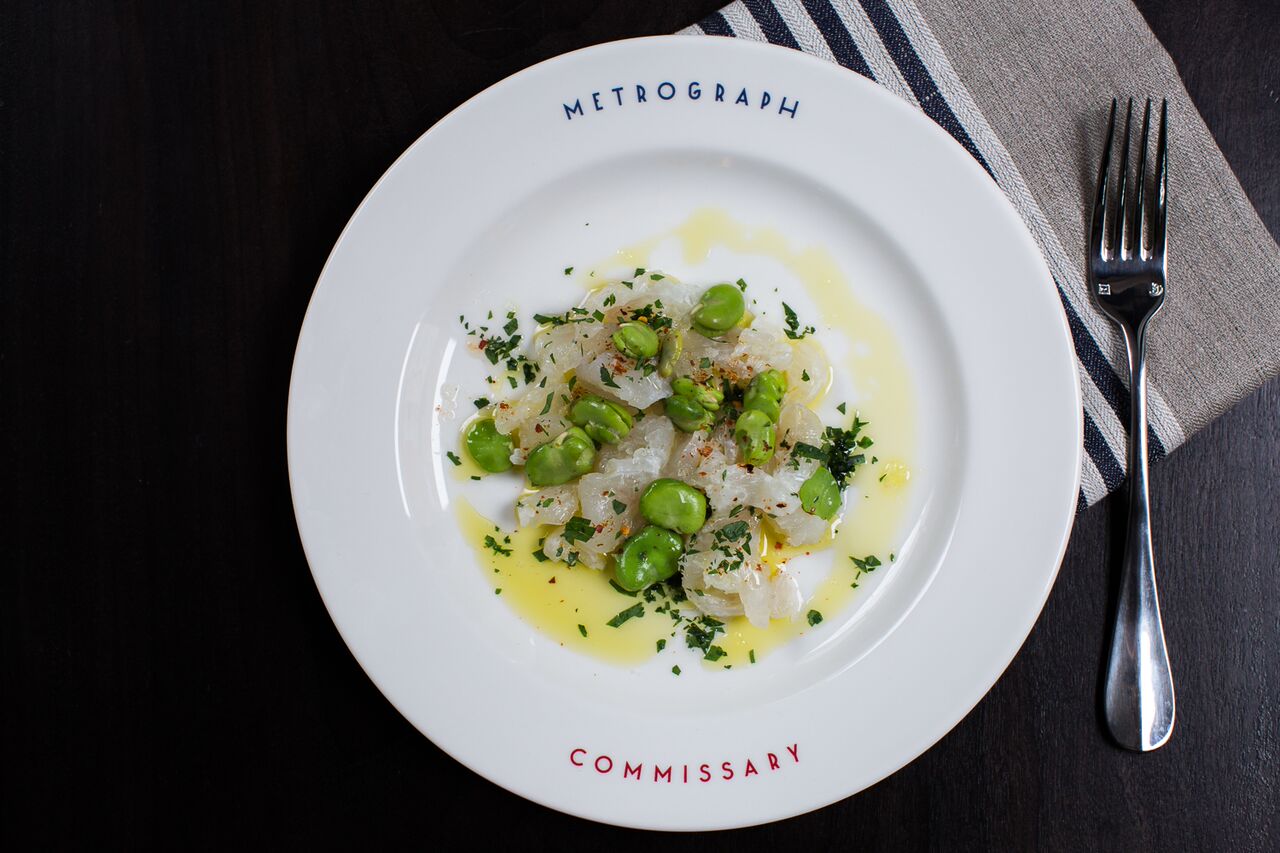 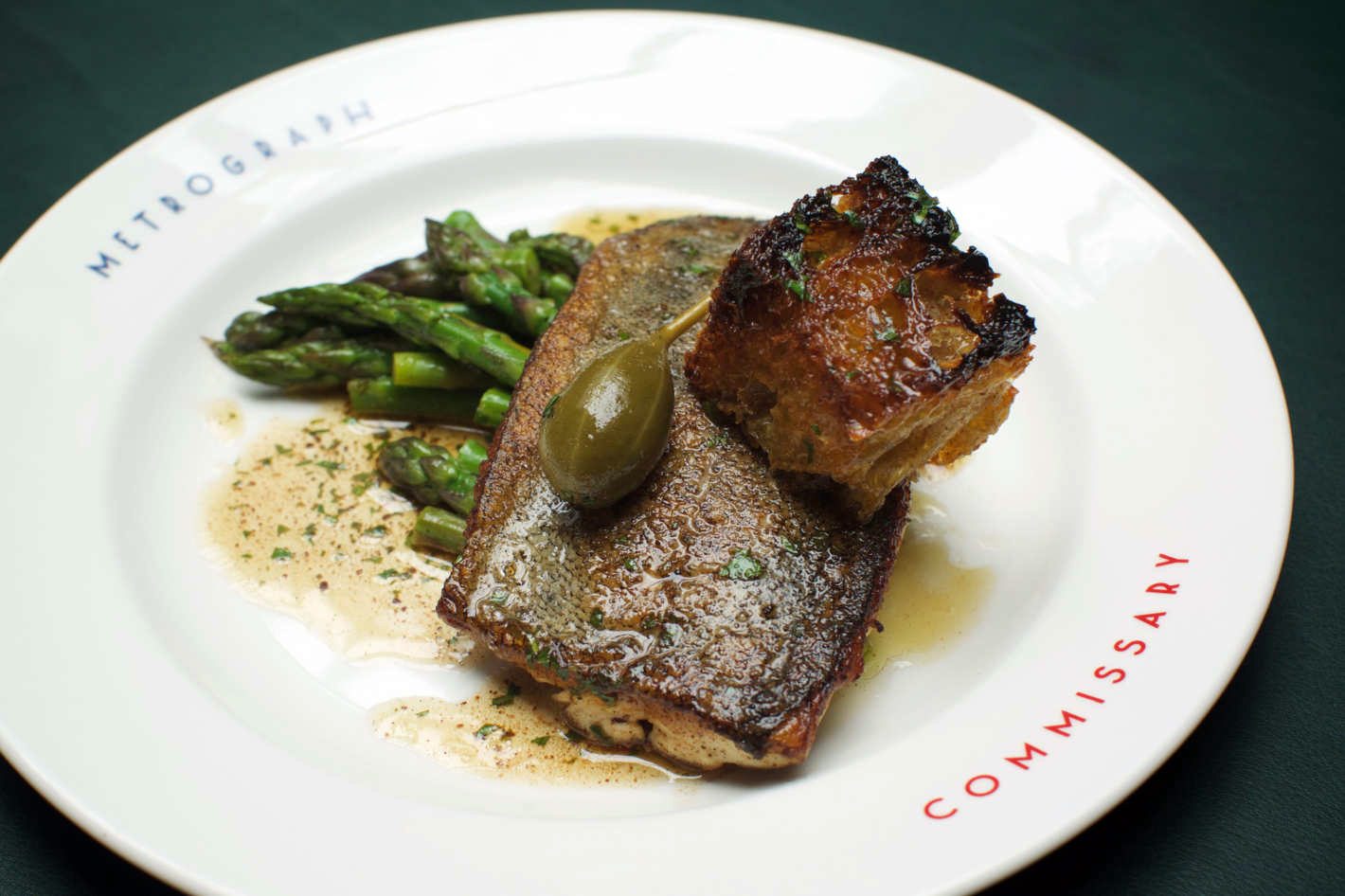 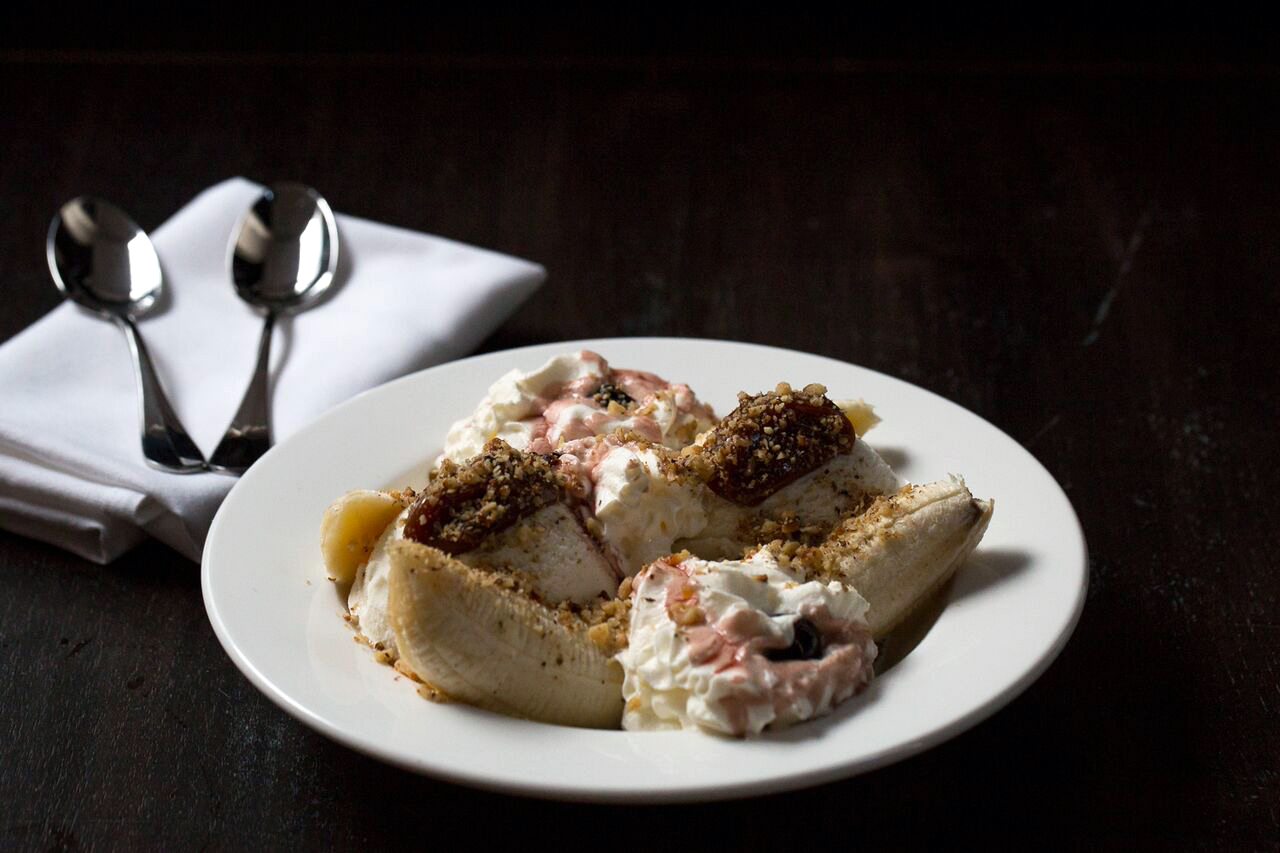 Events
Special events are often held at the Metrograph and include lectures and conversations with directors and producers. For instance, in July directors Alison Maclean and James Toback will be introducing showings of their previous film work.  There are also book signings, often paired with documentaries and premiere screenings. It is all geared to allow oneself to be immersed in the world of film.

Memberships
Like just about all cinemas these days Metrograph sells  gift cards, but they also sell discounted 10-Film Passes for USD $120.  A pair of 10-Film Passes costs USD $200, lowering the cost per ticket to USD $10. Each may be purchased at the Metrograph box office.

Though not available yet, Metrograph will also soon offer membership, a loyalty program that will presumably feature special discounts and benefits. For those New Yorkers that value their independent movie-going experience – and fans include film luminaries like Sophia Coppola and  Wes Anderson – they could not have asked for a better oasis of celluloid to flock to. Yes, celluloid. Did we mention that Metrograph prefers to show films on analog film on its Kinoton FP-30D projector whenever possible? But you probably already worked out by now that this is a haunt for true celluloid junkies.

Celluloid Junkie selects the CJ Cinema of the Month based on our own independent survey. We always pay for our own tickets and popcorn, and visit the cinema in a ‘mystery patron’ capacity in most cases. Whenever possible we take our own photographs of a cinema in lieu of corporate stock photos. Thus, sometimes you get authenticity at the expense of focus. Our impressions may be subjective, but we always try to be fair and factually accurate in everything being presented about one of the cinemas we have chosen.

Clarissa McNair
Clarissa McNair is a private detective and novelist who lives in New York City. McNair is a member of Pen America, the Overseas Press Club, Mystery Writers of America and was a founder and vice president of Pen Florida.
Latest posts by Clarissa McNair (see all)
Send this to a friend