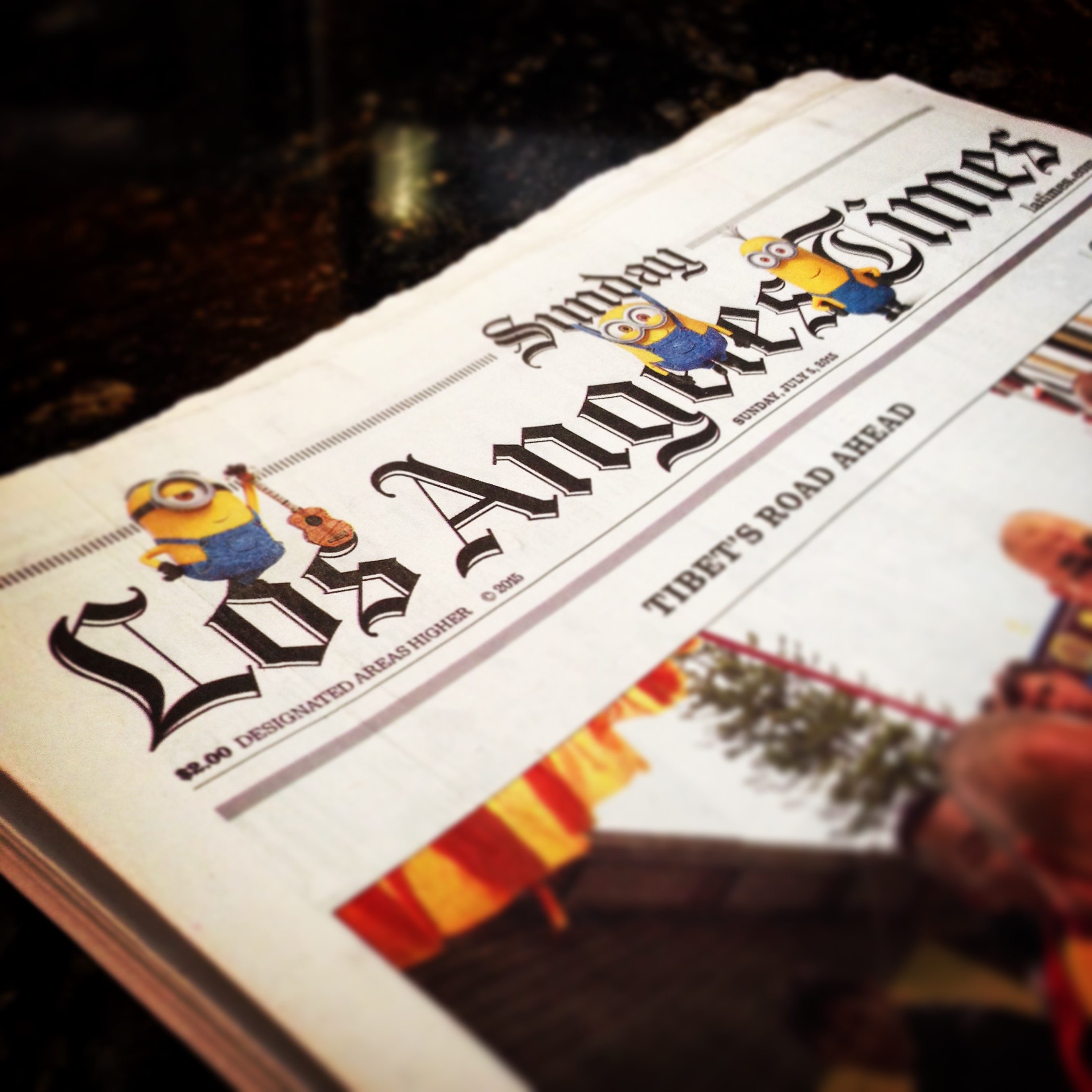 While “Minions” may not commence their invasion of the North American box office until tomorrow (July 10th), you’d have to be living a fairly hermetic life to be completely unaware of the latest animated release from Universal Pictures. The film’s marketing blitz has seen its eponymous goggle-eyed title characters show up in all sorts of places including atop Arclight’s Cinerama Dome in Hollywood to some of the world’s classic artwork. Last Sunday however, there was a minor online outcry when the Minions were caught promoting their new movie in the nameplate of the Los Angeles Times. Or maybe that was part of their plan all along.

Apparently it’s fine to have Stuart, Kevin, Bob and their Minion cohorts plastered across the outside of every box arriving from Amazon over the past month, but it’s journalistic sacrilege to have them inhabit the nameplate of one of the country’s more venerable news publications in what is clearly a promotion. At least that’s the opinion of some who took to social media, radio and their blogs to argue over whether the Times had committed the journalistic equivalent of harakiri by allowing the Minions to dance across its nameplate.

Kevin Roderick, a journalist and editor of LA Observed, a popular blog that covers the minutia of the Los Angeles media scene, reported that Universal Pictures paid USD $300,000 for the advertisement, an amount that also gave the studio additional placement for the movie throughout Sunday’s print edition, though in less prominent spots. Depending on whether you are comparing the rate paid for the campaign to an ad buy in the New York Times (which are often more expensive), that may seem like a lot of money. What’s remarkable is that Universal purchased an advertisement in a newspaper at all. Outside of awards season studios rarely, if ever, run campaigns geared toward building consumer awareness (instead of targeting the industry itself seeking accolade consideration).

This is a trend Roderick points out himself on his blog, before going on to write:

“Personally, I’m not sure this development is all that disturbing. The LA Times stopped respecting its visual brand and sold it to movie marketers a long time ago. (All big papers face the same kind of financial challenges, but no other respected papers go as far as the LAT to give advertisers new leeway…) They need the money, and ads are running away from print, although that might be fed in part because the Times doesn’t take that side of its brand as seriously, as readers move increasingly to digital.”

I would tend to agree with Roderick on these points. Sure, it would be nice if the Times maintained the integrity of its brand and they might be one of the few, if only, newspapers to allow such a campaign to run. You’d hardly expect to see such a stunt pulled on the front page of the New York Times or Washington Post. (Someone will now surely prove me wrong in the comments section or via email). But the current economic reality of print news outlets in the Internet age is relatively bleak, as has been well reported by… well, everyone.

The line between advertising and objective editorial has been blurring for some time now as print newspapers and magazines experiment with ways to regain ad dollars now allocated to online media outlets. In this particular instance, it should be obvious to most who saw the Times on Sunday that the Minions presence was part of an advertisement. Readers may not have taken the next logical leap to assume such prominent placement had to have been sold off by a sales department looking for a big payday rather than condoned by a room full of serious journalists steeped in traditional editorial practices.

That the advertisement was integrated into the nameplate bearing the Times logo is indeed unusual, however that’s likely what convinced Universal Pictures to run such a high cost campaign. A conversation starter on the front page of the largest newspaper in the number two market in North America may be just what the studio was after. Whether people were appalled by the move or found it amusing, they were at least talking about “Minions” at a time when Universal wants to activate moviegoers.

Roderick cites a source that says Universal was hoping placement of the advertisement would drum up some controversy in an effort to get a few headlines. If that was truly their intention then it’s safe to say Roderick may have benefited along with the studio given the debate his blog post sparked and the amount of social media sharing it received.

And for all those outraged on Twitter, Facebook and elsewhere on the Internet over the Times front page campaign for “Minions”, well, they better have an English accent or they may not be the high brow newspaper ombudsman of American journalism practices as they’d like to believe.

Most (though not Roderick) erroneously claimed the advertisement was placed in the print edition’s masthead, not its nameplate. In North American parlance the masthead of a newspaper is a list of editorial and departmental personnel responsible for the publication, found inside and often on the editorial page. The printed name or logo of a newspaper on its front page is referred to as a masthead historically in the United Kingdom and on websites. But then we’d be arguing semantics, literally, and could possibly be faulted for being too adherent to antiquated theoretical lexicography.