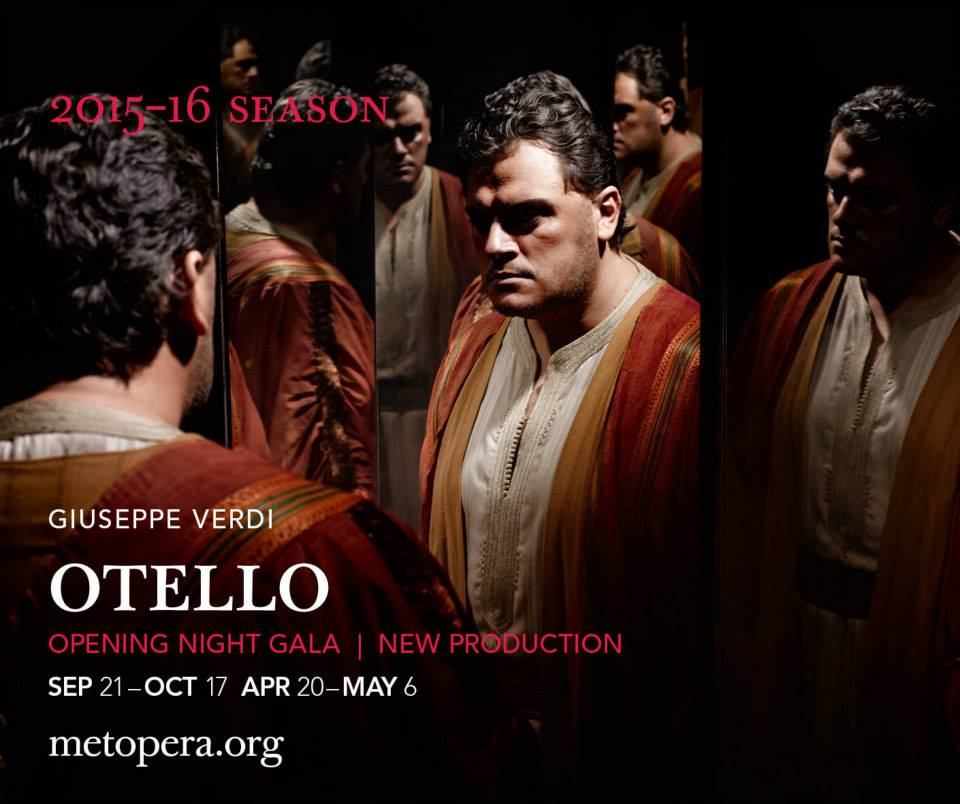 The annual announcement of The Metropolitan Opera’s upcoming season is always certain to spur a bit of highbrow cultural reportage among media outlets that go for that sort of thing. Such was the case today when The Met revealed the list of productions being planned for their 2015-16 season. While opera aficionados like myself yearn to visit Lincoln Center in person to catch one of the 25 productions The Met will be staging next season, having ten of these operas brought to us via our local cinemas is just as good, if not at times better, and certainly less expensive.

Once again, The Met will produce the award winning series “The Met: Live in HD“, beaming it out to 2,000 movie theatres in 70 countries around the world. As in previous years, The Met will include all six of its new productions among the ten that will be broadcast via satellite to cinemas. This includes new stagings of Verdi’s “Otello” with tenor Aleksandrs Antonenko on , Berg’s “Lulu” starring soprano Marlis Petersen in one of her signature roles, Bizet’s “Les Pêcheurs de Perles”, Puccini’s “Manon Lescaut” and Strauss’s “Elektra”.

One new production sure be a big draw is Donizetti’s “Roberto Devereux” on April 16, 2016. Not only is the opera being performed for the first time ever by The Met, but it will star renown bel canto soprano Sondra Radvanovsky singing the role of Elizabeth I. This will mark the first time a soprano has attempted to sing all three of Donizetti’s Tudor Queens (including “Anna Bolena” and “Maria Stuarda”) in New York during a single season. Performing Donezetti’s Tudor trilogy so close together is an operatic Triple Crown not achieved on a New York stage since Beverly Sills pulled off the extraordinary feat in the early 1970s.

Verdi’s “Il Trovatore” will kick off the 2015-16 season on October 3rd with the role of Leonora being sung for the first time at The Met by soprano superstar Anna Netrebko. Netrebko is a favorite of The Met’s (and frankly at any opera company in which she performs). She won raves in Verdi’s “Macbeth” last year and has appeared in at least 11 of The Met’s over 90 “Live in HD” productions. Netrebko will return to The Met on February 28, 2016 to make her New York recital debut in a solo show.

The new season marks the 10th anniversary of “The Met: Live in HD” which began in December of 2006 with Julie Taymor’s production of Mozart’s “The Magic Flute”. To provide some sense as the growth of the series, consider that the first year featured six productions that sold a combined 324,000 tickets earning The Met USD $3 million at 100 cinemas in Britain, Japan, North America and Norway. During the 2012-13 season, the latest for which financial returns are available, ticket sales topped 2.5 million grossing USD $60 million at 2,000 movie theatres in 64 countries, allowing The Met to pocket USD $34.5 million. Production and distribution costs for each broadcast have remained steady at around USD $1 million.

“The Met: Live in HD” has become a poster child for alternative content, or event cinema. It is a big hit hit with opera fans and theatre operators alike, the latter demographic appreciating the average 300,000 patrons who show up at cinemas for each broadcast. The same can not be said of the 16 labor unions that represent The Met’s employees who have a longstanding dispute with the opera company’s high profile general manager, Peter Gelb. Last year, in the midst of contract negotiations to avoid a work stoppage, Alan Gordon, the executive director of the American Guild of Musical Artists, sent Gelb an email faulting his spending, “especially on new productions which are not supported by ticket buyers, and on HD productions which are cannibalising the live audience”.

Yet in talking to The Guardian newspaper during that time period, Gelb defended his signature program, claiming there was no evidence of cannibalisation:

“What we’ve basically done is to extend the lifespan of the opera-goer. In the US, 75% of the cinema audience are 65 or over. And 30% are over 75. Those are people who are so old that they can’t go the Met, to the theatre, any more.”

Meanwhile, The Met’s income from the “Live in HD” series continues to grow, as revenue from traditional sources, such as box office, has declined in recent years.

Tickets for the 2015-16 season of “Live in HD” will go on sale in North America on July 24th. Members of The Met can purchase tickets before they go on sale to the public.