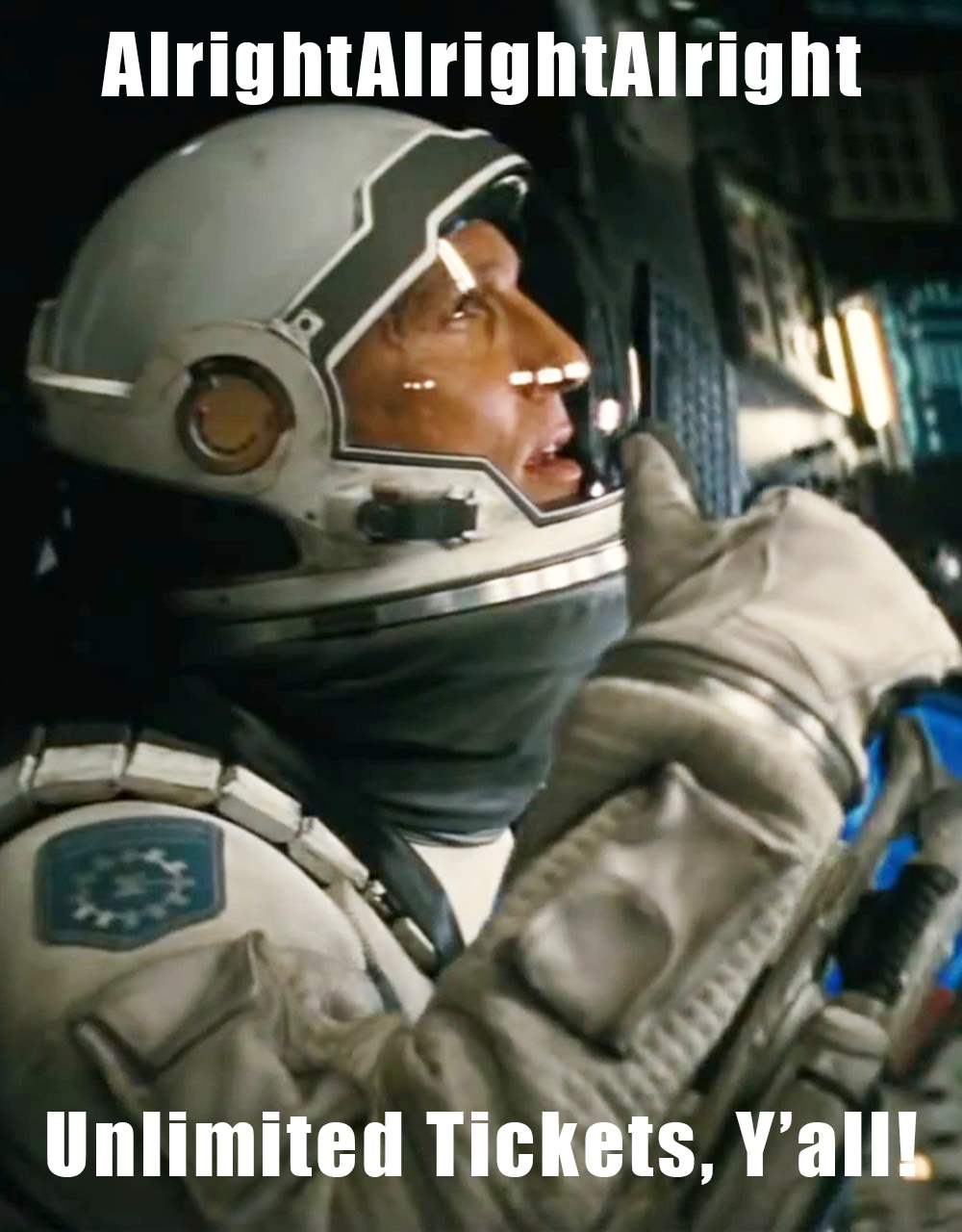 Two weeks ago AMC Theatres and Paramount Pictures announced they’d be teaming up to provide members of the cinema chain’s loyalty program, AMC Stubs, an opportunity to see “Interstellar” as many times as they’d like.

The Interstellar Unlimited Ticket, as the offering has been dubbed, costs between USD $19.99 and USD $34.99 depending on location. Stubs members who have already seen the movie can purchase an upgrade for USD $14.99. “Interstellar”, the latest film from director Christopher Nolan; a science fiction epic that was released to a great deal of buzz and in numerous formats, including traditional 35mm film, 70mm film, IMAX and digital.

“Christopher Nolan has created a masterpiece that movie fans are saying gets better every time they see it. The Interstellar Unlimited Ticket gives these fans an opportunity to experience the spectacular cinematography and heart-warming stories as many times as they would like – at any AMC location, any showtime, in any format, including IMAX.”

Not sure who these fans are with enough free time to sit through multiple viewings of a three hour movie, nor if that says anything about the unemployment rate in the United States, however “Interstellar” was one of this year’s most highly anticipated films and got pretty decent reviews. So, putting the question aside of whether there is actual demand to see “Interstellar” an unlimited number of times during its initial run, we contacted AMC hoping to get a few questions answered in an effort to write up a post that went beyond simply regurgitating the press release.

Thus, we are inserting the following obligatory statement:

AMC did not respond to multiple phone calls and emails seeking additional information and comments for this story.

We even went so far as to send the appropriate personnel at AMC some of the questions we had about the the Interstellar Unlimited Ticket, yet heard nothing back. Left with no way to cover the announcement in a manner that doesn’t come off as pure promotion, we came up with the concept of providing answers to the questions we had hoped to ask AMC. We’re not saying our answers are accurate, but simply educated opinions based on our own research and knowledge of the industry. Let us know what you think of them, and feel free to provide some of your own constructive answers in the comments section of this post.

When did the idea for the unlimited ticket program come about? Was it before the film’s release and, if so, how long did it take to put together?

The idea came about before “Interstellar” was released. One way to take a movie from being a strong success to an outright blockbuster is getting fans of the filmmaker or cast to see the movie more than once. Thanks to shortening theatrical release windows and the increased quality of home entertainment systems, the practice of seeing a release more than once in cinemas has decreased to an insignificant number.

Given the time of year in which “Interstellar” was released in the U.S., the first week of November, a huge number of people may have already seen the film before the Thanksgiving holiday break, which usually sees an increase in cinema attendance. What’s going to happen after Thanksgiving dinner or on Black Friday when half your family has already seen “Interstellar” and doesn’t want to go with those who want to see it for the first time? Most likely, everyone will compromise and go see the latest “Hunger Games”. Unless somehow those who have seen “Interstellar” are incentivized to entice those who haven’t seen the to go view it.

As for timing, it probably took between one and three months to put all the pieces together for the Interstellar Unlimited Ticket, including collateral material such as the special pass which can be used at any AMC theatre. However, Paramount and AMC made the wise decision of waiting until the film’s second week in release to actually announce the program. That way, if “Interstellar” flopped they wouldn’t be embarrassed by assuming that everyone would a) wish to see the movie and b) wish to see it more than once.

Who came up with the idea, AMC or Paramount?

Admittedly, this is a much harder question to answer. It easily could have been Paramount’s concept for all of the above stated reasons. The studio would still have to find a large exhibitor willing to take on what is essentially an experimental product offering and then work closely with the circuit to execute properly.

AMC could also have come up with the idea as an attempt to differentiate their retail offering of a product all of their competitors were also selling. In this case, AMC would have to convince the studio to allow the Interstellar Unlimited Ticket to be sold.

Because the offering isn’t being made available by other U.S. based cinema chains such as Regal or Cinemark, and given the press release quote came from an AMC executive, we are inclined to think the exhibitor may have come up with the concept. They certainly have nothing to lose by letting members of their loyalty program see “Interstellar” as often as they’d like after the first two weeks. Every time such moviegoers walk into their complexes it’s another chance to sell them concessions.

As well, not every unlimited ticket sold will result in patrons seeing the film enough times that Paramount or AMC would lose money they would have gained if the customer had paid full price for the ticket. Research shows that customers who have already purchased a non-commodity, non-perishable product do not often buy more of the same product in a short period of time without special incentives. There is also research that details how consumers who purchase gym memberships stop using them after the second month but continue paying for years. In other words, not everybody who purchases an Interstellar Unlimited Ticket will actually use them more than once so AMC may not even have to deliver the product it sold.

Is this a test program, wherein if it does well programs for other releases could be put together?

Everything that deviates from standard procedures or product offerings in the motion picture business could be considered a test program. For if such activity or merchandise results in increased earnings, it will be adopted in earnest.

If 3D films like “Avatar” a blockbusters, then studios will make more 3D films and exhibitors will purchase more digital equipment to play them. If one White House invasion movie does well (“Olympus Has Fallen”), then make another (“White House Down”).

If the Interstellar Unlimited Ticket is a, pardon the pun, hot ticket, then you can bet your bottom dollar studios and exhibitors alike will begin offering similar programs on a regular basis for upcoming releases.

Is this program a response to services such as MoviePass?

Not directly. MoviePass, the service that lets you see one film in cinemas every 24 hours for a monthly subscription fee, has too many restrictions that make it impossible to compete with products such as the Interstellar Unlimited Ticket.

The most obvious is that subscribers can only see each title a single time, rather than an endless number of times. In addition, MoviePass subscribers can not attend 3D or IMAX showings.

Still, don’t think that services such as MoviePass and programs like Cineworld’s Unlimited Card haven’t spurred some of the nation’s larger exhibitors to investigate the feasibility of creating their own subscription programs.

Don’t forget to let us know your own thoughts on the Interstellar Unlimited Ticket in the comments section below.