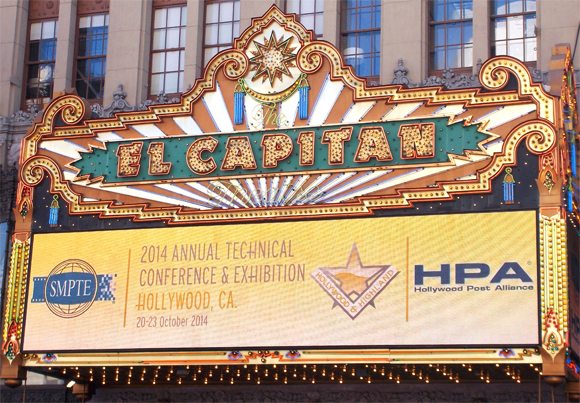 A half-hour is spent with Deluxe’s Stephen Ferguson and cinematographer Dave Stump, ASC looking at high resolution and high frame rates images with specially created test materials. The MOS footage was created by the Academy of Motion Picture Arts & Science Sci-Tech Council so that there would be royalty free material to test high dynamic range and high frame rate capability, among other features. Look for the new Academy StEM material to be made available soon, with detailed descriptions and appropriate licenses.

Then Jerry Pierce, Vice-President of the HPA and Technical Advisor at the National Association of Theatre Owners, kicks off a panel featuring Mitch Singer, formerly the Chief Digital Strategy Officer at Sony, Shaun Lile of Elemental Technologies and Pete Putnam, the president of ROAM Consulting. The focus is on how to get all the new fangled technology discussed previously in the day into the home, rather than cinemas.

Singer is the first to air his thoughts on the matter and he starts off with an axiom that has become a national anthem in the entertainment industry over the past several years. “Can I access the content I want to access when I want to access it and the device I want to access it on?” he asks rhetorically. “I think in this group [SMPTE] we focus on the quality of the content without focusing on the consumer experience. It’s really challenging as a consumer to pay more money to get higher quality content. I think we sometimes overlook that when we distribute high quality content. In the end it’s just a movie or a television program and you want to be entertained. Unless I can see it and see the difference I’m probably not going to be pay extra money for it.”

Singer gives a real-world example of how during a demo of native 4K on an 84 inch Sony television set versus a scaled HD image, he couldn’t tell the difference, so why spend the extra money? Alas, marketing groups have gotten their hands on the term 4K and won’t let go. “I’m not sure that 4K is going to sell anything,” he says. “However, I did see HDR, and the moment I saw HDR I brought everyone from Sony Pictures to see the demo. That’s the one thing I could actually see across the room. I really hope we get to that as soon as possible. I’m not sure if studios will be able to monetize it but I know that audiences will be able to see the difference with HDR.”

Lile says even with HDR, companies such as Elemental are hired to take out 98% of the picture in order to get the material down to a size which can be broadcast into the home. He expects we’ll all be hearing a lot about 4K over-the-top product offerings from various companies, despite the fact that most consumers can’t actually receive 4K content via their broadband connection or play it on current equipment.

“Netflix is a perfect example,” says Lile. “Most people have 3 megabits per second (Mbps) into the home and will see either a paused video or a lower quality video. From the consumer level they are all being fed right now that 4K is the way to go. It’s not going to be perfect, it’s going to be the next step. As consumers get hold of the technology they’ll make their own decision. But the end user will become educated and have higher expectations.”

Putnam believes Comcast is already airing a channel in 4K, possibly only in Philadelphia. The success of any 4K broadcast or over-the-top play will depend on moving from the H.264 codec, which is great for 2K images to the H.265 coded according to Putnam. Getting 4K into the home may not be a major issue since set top boxes can simply be swapped out by cable companies, but the problem will be getting the signal all the way to the television. Existing wiring and connectors are incapable of handling the data throughput required for 4K.

What about simply sticking an antenna onto our television over-the-air? “OTA is a sticky wicket because it’s based on MPEG-2,” Putnam explains. “Most televisions are built for MPEG-2 so the signal would have to transform with an MPEG-4 converter or set top box.”

“It’s kind of like building the plane while you’re flying it,” Putnam continues to describe the problem without use of acronyms or references to codecs. “The problem is the choke point into the home. Optical disc is not the way we’re going to go in the future. Consumers have shown it’s really not as important to have a physical copy of the content in their home as long as they can access the a good representation of the content when they want it.”

The dilemma, as Putnam sees it, is that the dominant way of moving images is HDMI which has a data rate capped at 10.2 gigabits per second (Gbps). This is just fast enough for 8-bit Ultra HD signals at 30 Hz. Now we have HDMI 2.0 coming along which has a data rate of 18 Gbps allowing for a 60 Hz Quad HD signal but only at 8-bits per pixel. Putnam doesn’t believe this latest iteration of HDMI is fast enough for 4K, especially as we move to 10-bit and 12-bit images.

Instead, Putnam points to DisplayPort as a possible way forward since it can transport video, audio and metadata at upwards of 32 Gbps with visually-lossless compression that happens on the display side. This overcomes the data rate problem of HDMI, which is why some electronics manufacturers have started including DisplayPort connections on their products.

“What you’re seeing is a collapse in the market because the cost of LCD manufacturing has come way down,” Putnam says. “Having all those features is wonderful but all of a sudden you’re over 18 Gbps by incorporating all these enhancements into content consumed in the home. How are you going to get it onto the television?”

Singer adds that he saw some HDR television sets at this year’s CES in January. But Putnam says it’s all about 4K for now. “It’s here, it’s not if it’s coming. You can already buy the products,” he says citing a new 4K GoPro camera as an example. Soon there will be no 2K television sets available and consumers will only be able to purchase 4K screens.

As for content, Singer says, “I think the studios have time to figure this out. I wouldn’t be rushing to produce a lot of 4K content right now because my gut feeling is once HDR becomes more widespread with a wider color gamut that’s what they’re going to be producing. How to monetize it will lead to a lot of reminiscing at studios. It’s going to be really challenging for the studios over the next few years. Every big movie with special effects for instance… What do you do with all the visual effects that were produced in 2K? When do you move to 4K?”

“There’s a mantra that I follow in the consumer electronics industry; Hardware is cheap and anybody can make it,” laughs Putnam. “American’s overwhelmingly want big cheap televisions. The bigger, the cheaper, the better. The Chinese are ready to step in and supply these big, cheap televisions.”

Singer however, isn’t convinced consumers are ready to spend extra money to get 4K content. “I would suggest you not pay Netflix more for 4K content,” he says.

“It’s really hard to corral the marketing guys when they’ve gotten out of the stable. It’s like herding cats. So many of us have run after them with the waste buckets and the brooms to sweep up after them,” Putnam laments. “Television is not a very good business to be in right now. The Chinese are the only ones making any money at it. They’ll do anything to make you get rid of your two year old smart TV because they have to. Where is all this glass going to go otherwise?”