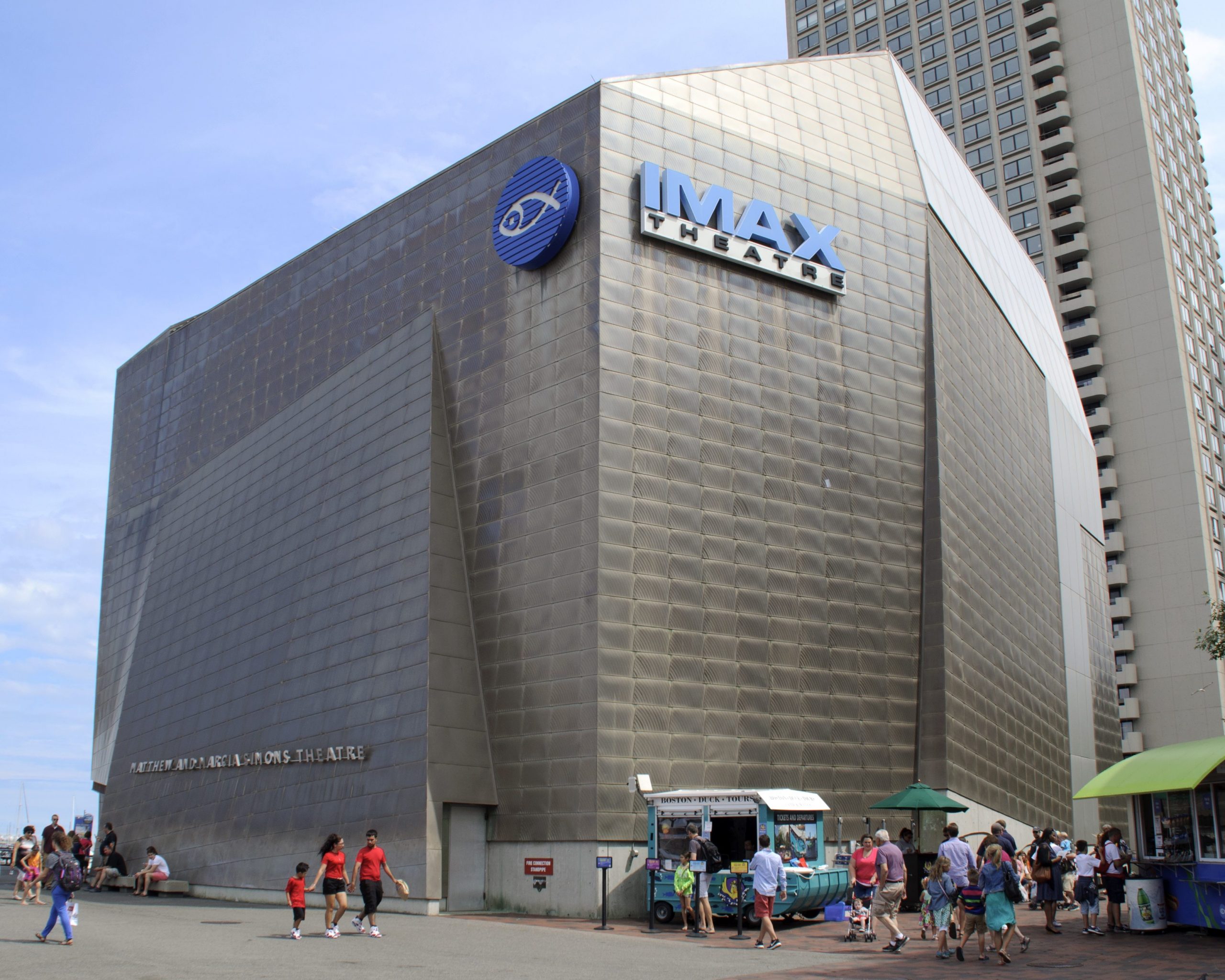 Those of you who follow me on Twitter, Facebook or Instagram are probably aware I’ve been in New England over the past two weeks. (Thus the lack of posts from me). Specifically, I was in Boston.

While there I stumbled upon the Matthew and Marcia Simons IMAX Theatre at the New England Aquarium. Though “stumble upon” is hardly the proper expression and can only be used in the most figurative sense since the theatre is enormous and hard to miss. That’s kind of the point of this post.

I happened to be dining at Boston’s world famous Legal Sea Foods at Long Wharf just across the street from the aquarium and snapped a few photos of the asymmetric metallic exterior. I figured I could dash off a quick post featuring the photo with a humorous caption along the lines of “Is it just me, or is there something fishy about this IMAX theatre?”.

Upon downloading the photo from my camera I began to wonder who designed the theatre’s rippling metal exterior, as it reminded me of some of architect Frank Gehry‘s more recent work, such as Walt Disney Concert Hall in Los Angeles or the Guggenheim Bilbao in Spain. I hope the good folks at Verner Johnson, Inc. don’t mind that I mistook their work for Mr. Gehry’s.

Actually I’m glad my curiosity led me to investigate the Simons IMAX Theatre further to discover Verner Johnson, the only architectural firm in the United States that specializes solely in planning and designing museums. I’m surprised I wasn’t aware of them already since they have designed at least 15 IMAX theatres for museums and science centers throughout the U.S. (and even one in China).

What’s noteworthy about the Simons IMAX Theatre, and the reason I chose to expand this post beyond my questionably humorous caption, is an important feature of the auditorium that might otherwise go unnoticed; its ability to market both the aquarium and IMAX.

The New England Aquarium is one of Boston’s more popular attractions. Located on Central Wharf, right next to Long Wharf and steps from the Rose Kennedy Greenway, the attraction has it’s own subway stop on the MBTA’s Blue Line. The city’s financial district, government center (city hall) and popular North End are all within a few minutes walk. More than 1.3 million people visit the aquarium each year and one of the very first things they see is the facility’s IMAX theatre. Flanking the entrance courtyard, it greets attendees approaching the aquarium from all directions with its bright shiny facade.

In addition, Central Wharf is teaming with tourists from all over the world who may not be going to the aquarium. From April to October the aquarium organizes whale watching cruises run by Boston Harbor Cruises. These expeditions leave from Central Wharf and Long Wharf. The latter also serves as an embarkation point for thousands of daily commuters taking the ferry across the harbor to points north and south. Whether you’re headed to Cape Cod or exploring the Boston Harbor Islands National Recreation Area from Long Wharf or Central Wharf, you’ll surely get a good view of the Simons IMAX Theatre on your way out of (or into) port.

With such prime placement, chances are if you ask any Boston native to name one of the city’s IMAX theatres, they’re likely to pick the Simons. It doesn’t hurt that the auditorium is housed in a building that makes ones gaze linger. Verner Johnson described the design of the theatre as follows:

“…a stand-alone structure designed to harmonize with the adjacent aquarium architecture. The forms convey a craggy architectural landscape, evoking the rocky intertidal zone where the ocean meets land. The surface metal is scale-like and was specified in both reflective and textured finishes, giving the theater an animated and effective shimmering quality.”

The theatre opened in December 2001 and depending on who you ask, it was either the first or second IMAX screen in Boston. (The Mugar Omni Theatre at the Museum of Science is an IMAX venue and opened in 1987, but it is actually an OMNIMAX format rather than straight IMAX). The screen at the Simons is 65 feet high by 85 feet wide and the auditorium has 428 seats.

During the day the Simons shows the kind of educational titles we have all come to expect from museum and institutional IMAX venues. “Great White Shark” and “The Penguin King” are presently showing in 3D. At night, the theatre is allowed to become a commercial cinema in which the latest Hollywood releases can sometimes be found.

When the Simons isn’t showing films, it is often used for business presentations, community meetings and lectures, making use of a hydraulic stage that can be raised into place or lowered from view as required.

The moral of this particular story (or post) is that sometimes it’s worth focusing not only on the features inside a theatre or multiplex, but also on those that people who never set foot inside might notice. Not every venue needs to be shaped like a bland box. As the Matthew and Marcia Simons IMAX Theatre at the New England Aquarium proves with its eye-catching design, the outside of many cinemas can actually serve as a marketing tool to help build brands and attract audiences.