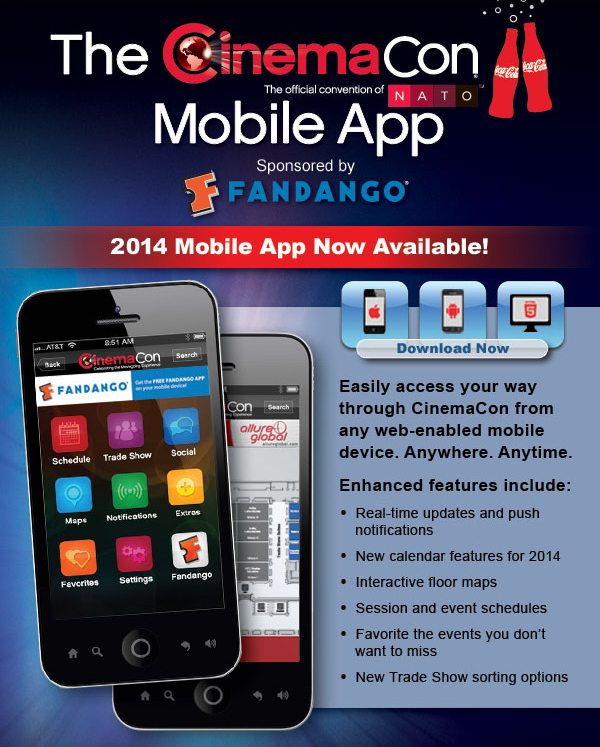 This year’s CinemaCon is just around the corner (March 24 – 27) and organizers of the world’s largest convention for movie theatre owners are once again providing show attendees with an informative smartphone mobile app.

Canadian based Soma Media developed the app for the National Association of Theatre Owners (NATO) using their EventKaddy platform. The free app is similar to those made available for CinemaCon in past years. In fact, if you’re like me and never deleted the app from your phone, all you have to do is update it to the latest and greatest version.

This year’s app is available now for both iPhone and Android. Attendees with Blackberry or Windows devices can access the HTML5 web app through their phones’ browser.

NATO, which runs CinemaCon, got Fandango, the web ticketing company, to sponsor the app. It features the most recent event schedule, a directory of trade show exhibitors along with maps of the trade show floor and convention area, and information on Caesars Palace where the conference is being held. There are even ways to see what CinemaCon is posting on its Twitter and Facebook accounts.

Though the app is very basic, it gets the job done. I personally found the iPhone version to be quite useful during last year’s CinemaCon. I especially appreciated the push notifications the app sent, alerting me to the start of various conference events.