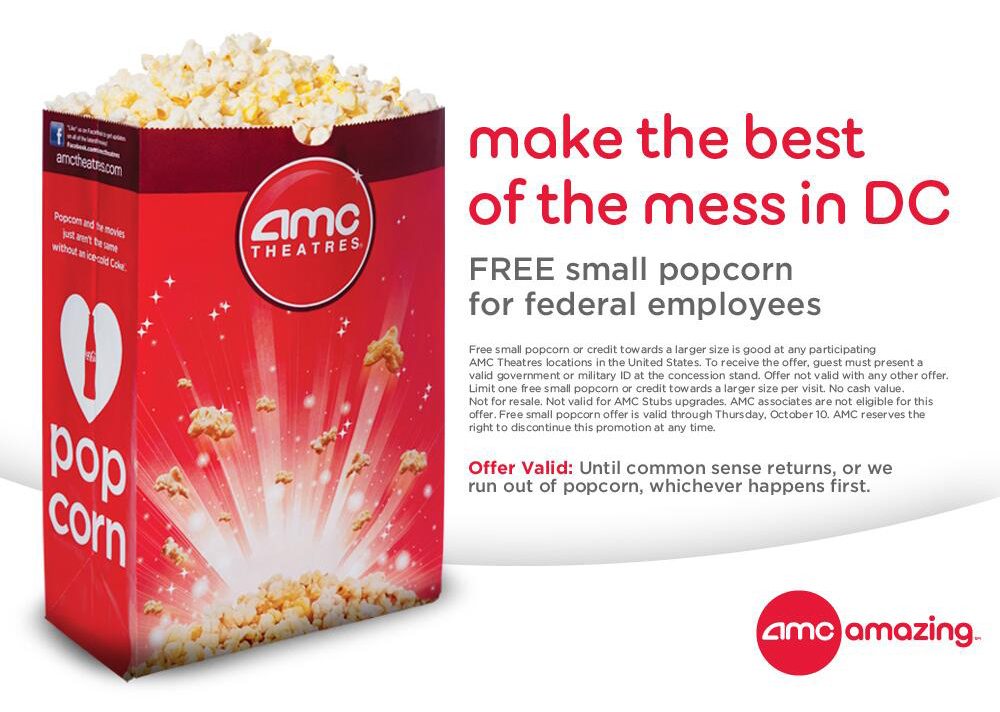 Coming up with some unique angle on AMC Theatres free popcorn deal for federal employees is nearly impossible. Over the last 24-hours apparently every media outlet worth their salt (pun intended) must have been required to write nearly identical pieces on the cinema chain’s altruistic announcement.

We at least have an excuse for covering the four paragraph press release from AMC Theatres; Celluloid Junkie is specifically focused on motion picture exhibition and distribution. After all, a bucket of popcorn serves as our logo.

This is actually a devilishly brilliant move by AMC on a couple of fronts. First off, their press release was picked up by the likes of CNN, the Wall Street Journal, the Huffington Post and… well, us, of course. By having the popcorn promotion piggy back off a hot political current event AMC’s media hits were off the charts. Secondly, many of the federal employees AMC is hoping to reach with the announcement have been sidelined since Tuesday by an unpopular government shutdown due to budgetary reasons. There are at least 800,000 furloughed workers who suddenly find themselves with some extra time on their hands. AMC is simply offering government employees one suggestion for any newfound, though unwanted, time off.

AMC didn’t exactly try to hide the fact that they are exploiting the situation. John McDonald, executive vice president of Operations at AMC, came out and admitted as much when he said:

“There are hundreds of thousands of federal workers whose lives are being impacted. While we can’t do anything to resolve gridlock in Washington D.C., we can provide a few hours of entertainment, and free popcorn, while they wait to get back to work.”

I suppose it’s a little much to suggest the promotion might even help sustain the economy during such trying times. But wouldn’t it be great if it could?

If you think we’re being a little flippant with this free popcorn post, we are merely trying to match the defiant and humorous tone AMC displayed in their press release. Here’s an example:

“The offer is good until common sense is restored in Washington D.C., or, more likely, until the shutdown ends or we run out of free popcorn.”

Speaking of the deal, customers will need to present a valid government or military ID at AMC concession stands to get their free small popcorn. Purchasing a movie ticket is not required. What I’d really like to know… is a passport considered valid government ID? If so, you can find me at an AMC cinema in Southern California enjoying free popcorn with my new best friends; furloughed government employees.