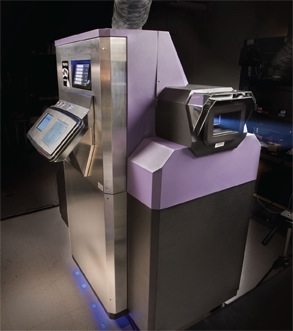 Kodak’s plans to create a light engine for digital cinema projectors that can compete with Texas Instruments DLP chip reached a crucial milestone earlier this week. The Food and Drug Administration (FDA) approved the variance application clearing the way for the commercialization of Kodak Laser Projection Systems which feature Kodak Laser Projection Technology.

Maybe, like me, you’re wondering what the FDA has to do with regulating anything that isn’t a food or a drug. Don’t they have eggs to inspect and clinical trials to oversee? Well yes, they do, however they also oversee any manufactured device that emits radiation. For the most part that means lots of medical equipment and x-ray machines, though laser light displays also fall into this category.

Much in the way pilots and drivers need licenses, a federal license demonstrating basic laser knowledge and safety is required to operate high powered laser systems. For instance, night clubs with laser light shows need to obtain variances for their lighting equipment. I’m not sure exactly what kind of variance Kodak applied for, but according to Les Moore, Kodak’s chief operating officer for Digital Cinema:

“The FDA variance serves as a template to be followed by manufacturers that we license to incorporate this new laser technology.”

In other words, any OEM choosing to manufacture a projector using Kodak Laser Projection Technology will have to file an application for their own variance. Kodak announced plans for a laser projection system last September and now hopes projectors with its technology will be brought to market over the next two years.

“We expect that the projectors based on our technology will be very cost effective compared to today’s digital cinema projectors. Exhibitors can expect to replace a Xenon bulb every 500-1,000 hours, whereas we expect these laser sources to last over 30,000 hours before they need to be replaced.”

While there’s no word on how much those laser sources will cost, Kodak is touting the low cost of its laser projection solution. The company is also well aware that such announcements might have a “ripple effect throughout the cinema world”.

Projectors using DLP technology have only recently become compliant with DCI’s specification and the industry was just beginning to feel comfortable with existing d-cinema products. Kodak is introducing another, potentially less expensive, solution in the midst of a long awaited digital cinema rollout and the fear is such moves could hold up the conversion plans of undecided theatre owners.