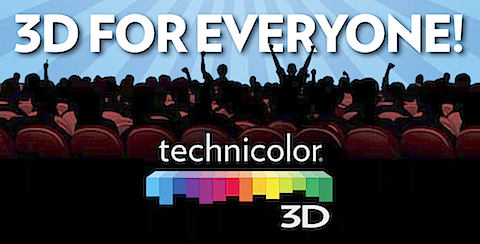 One question I am asked repeatedly by exhibitors is about the success of Technicolor’s 35mm film-based 3D solution. Rather than being asked by those in an exploratory phase, it oftem seems as if the question is being posed so that I can confirm someone’s doubts or decision not to install the technology. Usually I simply point people to an August press release Technicolor issued announcing they had deployed the system on more than 250 screens.

Two weeks ago during ShowEast, Technicolor shed a little more light on the subject with two additional press releases. The first detailed an agreement the company had reached with the Milwaukee, Wisconsin based Marcus Theatres to install their film-based 3D system on at least 15 screens. It also contained the following paragraph which, depending how you read it, may help answer the question about the format’s success:

Technicolor 3D is currently installed on more than 300 screens in North America, and has recently launched internationally in the United Kingdom, Germany, Italy, Spain, and Japan. The format was initially launched in theatres in March 2010. To date, nine films have been released in the format, including features from DreamWorks Animation, Lionsgate, Paramount Pictures, Universal Pictures, Warner Bros., and The Weinstein Company. Upcoming titles planned for release in the Technicolor 3D format include “Jackass 3D”, “Saw 3D”, “Megamind”, and “Yogi Bear”.

The next day Technicolor announced that they had reached a deal with Summit Entertainment to release the distributor’s upcoming action film “Drive Angry” in Technicolor 3D. The film, which was shot in 3D, stars Nicolas Cage, Amber Heard and William Fichtner and is set to be released on February 11, 2011. Technicolor’s film-based 3D prints will be available to North American theatres.

Technicolor announced their film-based 3D system in September of last year amid much skepticism. The solution requires a special 3D projector lens which is used to split the over/under images on each frame of 35mm film. Rather than containing one image that is four perforations high, each frame of film holds two images that are two perforations high. Technicolor is currently patenting the digital process used to optimize the compressed images onto 35mm film.

But it was Richie Fay, Summit’s President of Domestic Distribution, who best explained Technicolor’s 3D solution in his press release statement:

“Technicolor 3D allows us to bring ‘Drive Angry’ to a wider number of theatres in 3D. We see Technicolor 3D as a great bridge solution for the industry as the digital cinema conversion progresses.”