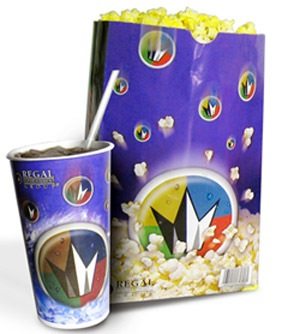 As if theatre owners didn’t have enough to worry about with studios shrinking release windows at every opportunity, they may soon have to start worrying about moviegoers bypassing the real bread and butter of any exhibitor’s business, or more appropriately the popcorn and butter. A new study conducted by the non-profit Center for Science in the Public Interest and released earlier today reports that the food items found at most movie theatre concession stands are incredibly unhealthy. Lab tests revealed that eating a medium popcorn and soda combo from Regal Cinemas was the equivalent of eating three McDonald’s Quarter Pounders topped with 12 pats of butter. For those with a more of an interest in nutrition, that’s 1610 calories and 60 grams (three days’ worth) of saturated fat.

The CSPI report also found that the candy sold by most exhibitors is no better. An extra large box of Junior Mints contains 570 calories and 8 grams of fat. Raisinets are 420 calories and 11 grams of fat. M&Ms may be tiny but they pack in 790 calories and more than a half a day’s supply of saturated fat (16 grams). Then there’s the calorie king of all movie theatre confections, Reese’s Pieces which are loaded with 1,160 calories and 35 grams of saturated fat. To hammer the point home the study compares the intake of such candy to eating a 16-once T-bone stake with a buttered baked potato as a side order. It’s a miracle that E.T. the Extra-Terrestrial’s heart was still able to glow after downing all those Reese’s Pieces in Steven Spielberg’s blockbuster back in the early 1980s. The alien rightfully should’ve keeled over from a heart attack according to CSPI.

The study points a firm finger in the direction not only of Regal, the world’s largest circuit, but also AMC Theatres, the second largest theatre chain and Cinemark, the third largest exhibitor in the United States. CSPI sent samples of popcorn and soda from Regal and AMC theatres in Washington D.C. area to a lab for testing. Samples from Cinemark were collected from venues in Texas Illinois and Maryland. The organization found that each of the chains under-reports the calories served up in their popcorn. For instance, Regal claims their medium size popcorn contains 720 calories while a large size has 960. However, the tests conducted by CSPI’s lab uncovered the truth – they actually have 1,200 calories.

Faulted for the high calorie and saturated fat count was the coconut oil used to pop the corn kernels by both Regal and AMC. The canola oil used by Cinemark lowers the calorie count to between 760 and 910, but significantly decreases the saturated fat from 60 grams to no more than 4 grams. Oh, and apparently the “fake-butter” topping doesn’t help either. Regal was found to be the worst offender on the calorie and fat meter, with AMC and Cinemark coming in second and third respectively.

Ty Burr’s article on the report in the Boston Globe is a hilarious read. Honestly, I want to know who authorized such a study and how much it cost. They could have given me half the money and I could have turned the report around in a couple of hours. After all, theatre owners aren’t hiding the fact that they’re selling candy. Exactly what was CSPI expecting to find?