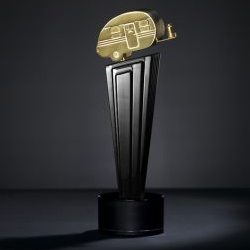 We’re all familiar with the awards such as the Oscars which are given out to the movies and filmmakers that become critical darlings in the United States each year.  However what praise is ever heaped on the short films made specifically to promote such films.  As it turns out, there is indeed a special award given out to those who make the year’s best trailers; the Golden Trailer Award.  Celebrating its 10th anniversary, this year’s awards show was held at the Directors Guild of America this past Thursday and the trailer for “Star Trek” produced by Aspect Ratio took home the top two prizes – the Summer 2009 Blockbuster Award and the Best In Show Award.

The program kicked off with a quick cut montage with highlights from the  previous nine years awards show.  The clips wound up serving as a stark contrast for how toned down this year’s festivities were due in large part to the current economic recession impacting the show’s budget.  At least the evening’s host, “Saturday Night Live” comedian Dean Edwards, managed to keep the show moving at a pretty decent clip (no pun intended).

Actually, awards shows such as the Oscars could learn a thing or two from the Golden Trailer Awards when it comes to expediency – 17 awards were presented in about 90 minutes.  I’m not sure if there is some unwritten rule about acceptance speeches being proportionate to the length of the winning work at movie awards shows, but thankfully the evening’s winners kept their acceptance speeches to under 30 seconds by only saying a few words.  Frequently, the walk up onto the stage took longer than the acceptance speech itself.

This year marked the first year that the Best Voiceover award was changed to the Don La Fontaine Award For Best Voiceover, in honor of the late trailer voice over legend.  Buddha Jones’ trailer for “Tropic Thunder” took home the award on Thursday.  Another unique category was the Golden Fleece Award, given to the trailer for one of the year’s biggest flops.  Seismic Productions picked up this prize for their work on the preview for “The Spirit”.

Other Awards presented at the 10th Annual Golden Trailer Awards show were as follows: