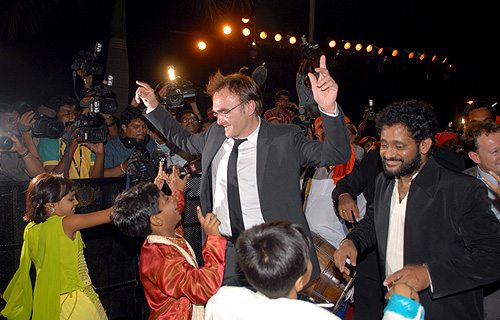 Less than 24-hours after “Slumdog Millionaire” picked up 10 Oscar nominations on Thursday, filmmaker Danny Boyle’s rags-to-riches movie about a teenage boy from the slums of Mumbai opened on Friday in India stirring up a bit of resentment and controversy.  In fact, rather than being greeted by long lines of moviegoers, according to The Times of India the release of the film caused a small riot at the Inox Multiplex in Panaji.

As a story in the Los Angeles Times details, some in India are dismayed over what they see as the stereotypical portrayal of their country as filled with corruption and impoverished throngs.  Hindu Janajagruti Samiti (HJS), a pro-Hindu group, petitioned the government to ban or censor “Slumdog Millionaire” stating that the movie would upset the religious values of millions of Indians due to references of Hindu deities and a misrepresentation of the Lord Ram.  Then on Friday, a large group of Shiv Sena activists vandalized the only multiplex in Panaji (the capital of the Indian state of Goa) when theatre managers would not cancel showings of the film.Shiv Sena is one of India’s more boisterous political parties and during the melee they lived up to their reputation as a militant right-wing group when members threw rocks at the theatres’ windows, tore down posters and vandalized the multiplex.  Managers at the theatre had to call in police to quell the mild uprising who in turn carted off 12 Shiv Sena activists.  While all of this was taking place, HJS protested outside the theatre.

Some of the Shiv Sena activists present during the altercation told journalists they believe the very name of the film is degrading.  They claim Mumbai’s impoverished citizens do not want their neighborhoods referred to as slums, nor wish to be referred to as dogs.

Much like political and religious protests against controversial films in other countries, Shiv Sena’s actions are only serving to provide “Slumdog Millionaire” with more exposure.  The movie has already made more then USD $50 million worldwide and is being hailed by some in the country as the most successful Indian film of all time.  Box office prospects in India, where the film was shot, remain positive, however The Economic Times is reporting that ticket sales for the English language version of “Slumdog Millionaire” are off by about 20%  due to rampant piracy.  Because of the overwhelming interest in the film, and with a two-month window between the film’s U.S. and Indian release dates, pirated copies of the movie made their way into the country and could be found on the Internet as well as the streets of major cities such as Mumbai.  One cable station reportedly even went so far as to air the English version of the film before it officially opened in theatres.

Despite all the protests and political rhetoric being thrown at the film in India, it would have been interesting to see how loud the outcry and accusations of racial prejudice would have been by those same activist groups had the Academy overlooked “Slumdog Millionaire” when announcing its nominations on Thursday.