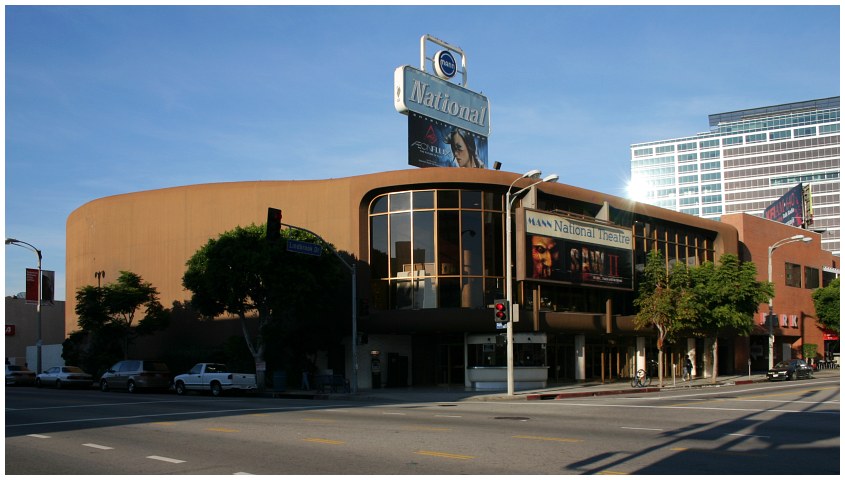 The National Theatre, the last single screen movie theatre to ever be built in the United States, is presently being demolished in the Westwood neighborhood of Los Angeles. Since the fall of 2006, when Mann Theatres was forced to give up the lease on the 1112 seat theatre due to increased rent, the future of the National has been in doubt. Now, according to UCLA’s student newspaper, the Daily Bruin, the National Theatre is presently being torn down to make way for a single story retail outlet reported to be a Banana Republic clothing store.

The film that probably brought the National Theatre the most attention was ‘The Exorcist’. The film opened in a platformed release at the National Theatre in December 1973 to rave reviews and sold out screenings. Pictures and footage of moviegoers wrapped around the theatre appeared in newspapers and television across the country turning the film into a huge hit when it opened wider in the spring of 1974.

The National was a favorite among movie buffs as it was one of the few theatres capable of showing 70mm prints, though with the advent of digital surround sound, studios rarely released films in the large gauge format. The National was also known for its two large lobbies connected by a spiraling staircase and in which hung a 14 foot tall antique mirror as well as custom made chandeliers. Over time, the late 1960’s décor went from being modern to out-of-date to ultimately retro, though the bright orange interior of the theatre itself looked a little worse-for-wear toward the end. Of course, the giant screen at the front of the room found few rivals in Los Angeles, if not the United States.

By the mid-1970’s Westwood Village had become a moviegoing mecca with at least half a dozen theatres within walking distance of one another, including the Village, the Bruin and the Festival which are still operating. Over the last decade however, large multiplexes opened just a few miles away – the AMC Century 15 is less than 3 miles away – and began to siphon off business from Westwood Village. Even as attendance dwindled, Hollywood studios kept showing up at the National Theatre to hold star studded movie premieres throughout the 1990’s and right up to when Mann closed the theatre in May of 2007.

In an age when most movies don’t play for more than three weeks to large audiences, booking a single screen theatre was a chore, given that most distributors want to guarantee runs for four weeks before letting a film come off. That combined with clearence rules for nearby theatres may have compounded the issue for Mann, who was probably operating the National in the red for quite some time. In the Daily Bruin article, Peter Dobson, the CEO of Mann Theatres was quoted as saying:

“Business had gone down at that theater. It wouldn’t have been financially viable.”

For a short time after Mann gave up its lease on the National filmgoers were given some hope that the theatre might be saved when an independent theatre began showing films there. However, many believe this was just a ruse to provide the landlord and real estate developers with enough time to get their plans and permits in order without causing a huge public outcry over demolishing the theatre. On October 7, 2007 the National was closed for good.

A list ditch effort was made to try and save the theatre when a small group called Friends of the National Theatre attempted to get the building declared an historic landmark with the Los Angeles Cultural Heritage Commission. An online petition also cropped up, but to no avail. On November 1st, the Cultural Heritage Commission met at Los Angeles City Hall and unanimously voted to consider making the National an historic monument delaying demolition for a short time. However, after inspection of the theatre they voted against declaring the National a historic landmark clearing the way for demolition.

Now, with demolition nearly complete, Los Angeles moviegoers and cinema historians will no doubt focus their attention on saving both the Village and Bruin theatres; single screen venues run by Mann Theatres whose lease is up in 2010.