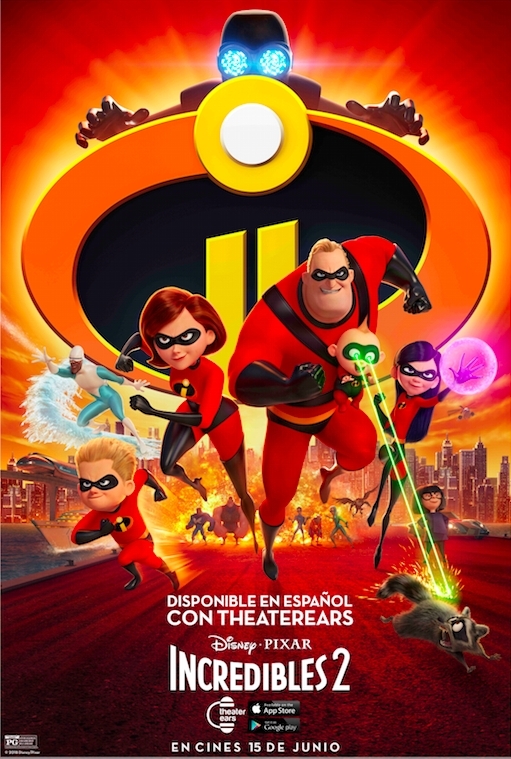 The Walt Disney Studios and TheaterEars announced that Disney•Pixar’s Incredibles 2 will be available on the TheaterEars app, enabling moviegoers who prefer Spanish to enjoy it at movie theatres across the US and Puerto Rico.

New users will find the app user-friendly and intuitive. First, download the app & register your account, preferably before arriving at the theater. Second, select your movie, movie theater, and showtime and the app will get the Spanish audio track on your phone. When you arrive at the movie theatre, open up the app, connect your earphones, and press play once the movie begins.

“The ‘INCREDIBLE’ team at The Walt Disney Studios has been a joy to work with. They produce high-quality content that moviegoers demand to see,” said Dan Mangru, CEO of TheaterEars.

“Once again, we are proud to work with TheaterEars to provide a first-class experience to our Spanish-speaking moviegoers,” says Paul Holliman, Vice President – Sales, Central Region at Walt Disney Studios Motion Pictures.

In “Incredibles 2,” Helen (voice of Holly Hunter) is called on to lead a campaign to bring Supers back, while Bob (voice of Craig T. Nelson) navigates the day-to-day heroics of “normal” life at home with Violet (voice of Sarah Vowell), Dash (voice of Huck Milner) and baby Jack-Jack—whose superpowers are about to be discovered. Their mission is derailed, however, when a new villain emerges with a brilliant and dangerous plot that threatens everything. But the Parrs don’t shy away from a challenge, especially with Frozone (voice of Samuel L. Jackson) by their side. That’s what makes this family so Incredible. Written and directed by Brad Bird (“Iron Giant,” “The Incredibles,” “Ratatouille”) and produced by John Walker (“The Incredibles,” “Tomorrowland”) and Nicole Grindle (“Sanjay’s Super Team” short, “Toy Story 3” associate producer), Disney•Pixar’s “Incredibles 2” busts into theaters on June 15, 2018.

About The Walt Disney Studios

For over 90 years, The Walt Disney Studios has been the foundation on which The Walt Disney Company was built. Today, the Studio brings quality movies, music and stage plays to consumers throughout the world. Feature films are released under the following banners: Disney, including Walt Disney Animation Studios and Pixar Animation Studios; Disneynature; Marvel Studios; and Lucasfilm. The Disney Music Group encompasses the Walt Disney Records and Hollywood Records labels, as well as Disney Music Publishing. The Disney Theatrical Group produces and licenses live events, including Disney on Broadway, Disney On Ice and Disney Live!.

TheaterEars is an iOS and Android based app that enables moviegoers to experience a movie in Spanish at the movie theater in real time using their smartphone and earbuds. Founded in Boca Raton in 2013, the company seeks to break the language barrier for moviegoers and is currently available for selected major motion pictures in the United States and Puerto Rico. Previous films released include: Coco, Solo: A Star Wars Story, Jumanji, Rampage, A Quiet Place, Overboard, Pacific Rim Uprising, and Steven Spielberg’s Ready Player One.