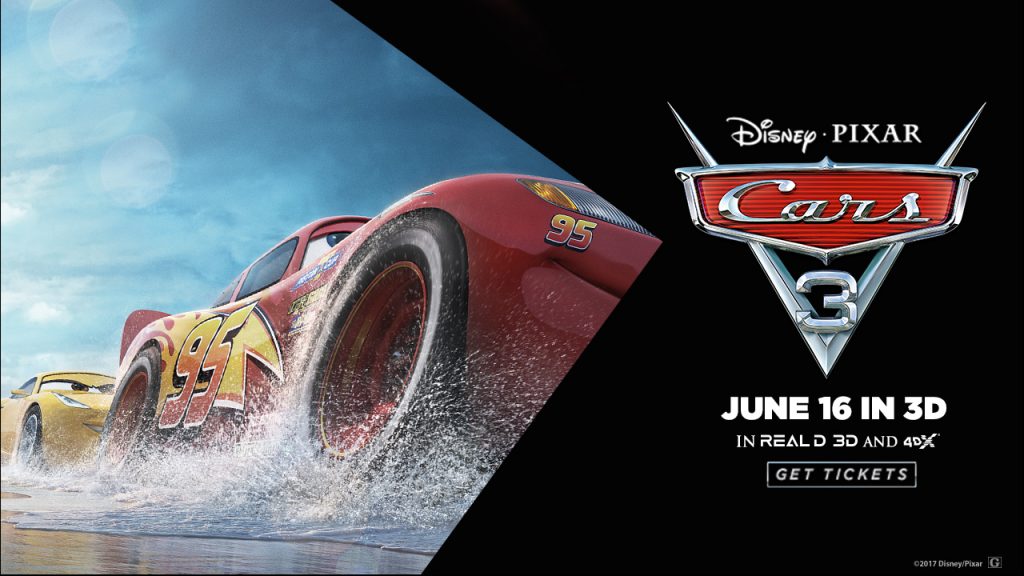 CJ 4DPLEX, the world’s leading 4D cinema company, today announced that for the first time since the company’s inception, it will be premiering a Disney•Pixar film in the immersive film-viewing format at 4DX auditoriums around the globe.

The announcement marks a significant moment for 4DX and fans worldwide as “Cars 3” is the first-ever Disney•Pixar film to be available in the multi-sensory, immersive format. To date, CJ 4DPLEX has converted films from Disney (live-action and animated), Marvel Studios and Lucasfilm. Today’s announcement comes as an anticipated next step for 4DX and Disney fans worldwide who have been eager for a Pixar 4DX conversion.

“Cars 3” incorporates automobiles, action and animation – a few of 4DX’s most popular and best-fitting themes and genres when it comes to film conversions. The format has a proven success record for the mentioned genres and themes, most recently reinforced with Universal Picture’s eighth installment of the Furious franchise, “Fate of the Furious.”

“We could not have hoped for a better title than ‘Cars 3’ as the first Pixar film to be converted into 4DX. We’re confident that our motion seats and environmental effects will bring every racing scene, every well-loved character and every aspect of Pixar’s animation to life,” said Byung Hwan Choi, CEO, CJ 4DPLEX.

About “Cars 3”
Blindsided by a new generation of blazing-fast racers, the legendary Lightning McQueen (voice of Owen Wilson) is suddenly pushed out of the sport he loves. To get back in the game, he will need the help of an eager young race technician, Cruz Ramirez (voice of Cristela Alonzo), with her own plan to win, plus inspiration from the late Fabulous Hudson Hornet and a few unexpected turns. Proving that #95 isn’t through yet will test the heart of a champion on Piston Cup Racing’s biggest stage! Directed by Brian Fee (storyboard artist “Cars,” “Cars 2“), produced by Kevin Reher (“A Bug’s Life,” “La Luna” short) and co-produced by Andrea Warren (“LAVA” short), “Cars 3” cruises into theaters on June 16, 2017.

About CJ 4DPLEX
CJ 4DPLEX is the world’s first 4D cinema company, headquartered in Seoul with international offices in Los Angeles and Beijing. The company created 4DX, the first and leading 4D cinema technology for feature films, providing moviegoers with an immersive cinematic experience that utilizes all five senses, allowing the audience to connect with movies through motion, vibration, water, wind, snow, lightning, scents, and other special effects that enhance the visuals on-screen. CJ 4DPLEX brings 4DX auditoriums to exhibition partners along with 4DX codes for both major Hollywood blockbusters and local titles. Each auditorium incorporates motion-based seating synchronized with more than 20 different effects and optimized by a team of skilled editors, maximizing the feeling of immersion within the movie, beyond the limits of audio and video. Since 2009, more than 400 Hollywood titles have been screened in 4DX. As of June 2017, more than 47,000 4DX seats operate in 380 auditoriums spanning 48 countries. CJ 4DPLEX was named a Most Innovative Company of 2017 in Live Events by Fast Company. For more information, please visit www.cj4dplex.com.