Cinema operators all across the globe are dreaming of a blue Christmas. Filmmaker James Cameron is the unlikely high-tech Santa, who they hope will make all their box office wishes come true. The early signs for “Avatar: The Way of Water,” which opened this week/end are auspicious.

Indeed, the Avatar sequel was the top grossing film in the 53 territories in which it opened, bringing in USD $435 million. It’s worth noting this is the second highest global opening in 2022 behind “Doctor Strange in the Multiverse of Madness” which debuted to USD $442 million back in May. And that was without 3D potentially inflating the gross. RealD is reporting 3D ticket sales represented 66% to the opening weekend of “Aavatar: The Way of Water” worldwide, or USD $287 million. That likely includes the 11%, or USD $48.8 million, earned from 1,543 IMAX screens in 80 markets, including China.

Very early on some territories were reporting advance sales, with China, Korea and India all reporting numbers that were amongst the strongest for any film this year, if not all time. That proved to be a tad optimistic, though not by much. In China tickets were being sold for up to CNY 300 (USD $43) or more, as dynamic pricing kicked in and box office could hit USD $350 million in that country. Significantly, under the government’s u-turn on their Zero Covid strategy, the opening rate of cinemas in China is now over 80%. Indian numbers may be hit by chains in the south of the country refusing to play the film on account of the alleged 70-30 revenue share split.

Even if Avatar 2 outperforms all expectations for the duration of December, it will not be enough to lift the annual global box office to close to pre-pandemic levels (plural – not just 2019) according the the final 2022 by Gower Street Analytics (see below or the full story), even if all the numbers are moving in the right direction. “Gower Street’s first Global Box Office prediction for 2023 suggests further improvement. The USD $29 billion projection would represent a 12% gain over the current year if 2022 remains on course for an approximate USD $25.8 billion global box office.” At the current rate, recovery to the three-year pre pandemic average will have to wait until 2024.

If you’ve been attending our CJ Cinema Summit sessions this year, you’ve heard more than one studio executive predict 2024 will see the market return to pre-pandemic levels.

It would be unfair to expect any one film to “save” the global box office, whether Bond, Maverick, Minions or Avatar -with Scrooge-like bah humbug analysts saying as much this week. However, the success of one film can shape the narrative around the fortunes of cinema, even as some customers remain reluctant to return, as shown in the German YouGov poll this week.

Avatar is a film that should be enjoyed with the best possible presentation, whether IMAX 3D, Dolby Vision (more on that from our sponsor below), CINITY (which has three sites in Europe and many more in China), ScreenX, RealD, 4DX, PLF or any other premium format. There is no denying that the film has pushed the technical envelope on multiple fronts and in the opinion of yours truly, makes high/variable frame rate (HFR/VFR) work in a way that eluded previous films. We also wish more sites did as good a job as breaking down which formats are available in which cinema just like Japan’s AV Watch.

“Avatar: the Way of Water” currently enjoys a Rotten Tomatoes audience score of 94% and critics score of 78%, making it certified “Fresh.” However, the least impressed viewers seem to be UK film critics, many of whom are giving the film one or two stars and seem to treat the film’s release as a personal affront. This will only serve to increase the already wide gap between critics and audiences, though it should be added that critics in both the United States and France seem much more enthusiastic about the film.

One audience that will ignore not just negative reviews but also international copyright laws are certain cinema operators in Russia, which are openly talking about playing the film in violation of current economic sanctions as soon as there is a quality copy made. This will of course not count towards the official global box office, but if the film falls short of significant international box office milestones, it could be yet another thing we can blame Russia’s leader Valdimir Putin for destroying this year.

So let us hope that enough cinema goers will want to make the trip back to Pandora for “Avatar: The Way of Water” not just to have a big opening box office weekend, but that it demonstrates staying power and continues playing to full cinemas well into the new year. It is of course not the only film opening as 2022 winds down (oh hello “Babylon”) but it is one we can all agree is hugely important to our industry, so in addition to JC (in addition to the we usually celebrate during the holidays) a thank you also to the countless and nameless crew, technicians, VFX artists, distributor, cinema staff and everyone else involved in bringing the Na’avi to our screens. You all make the magic happen – not just at Christmas. 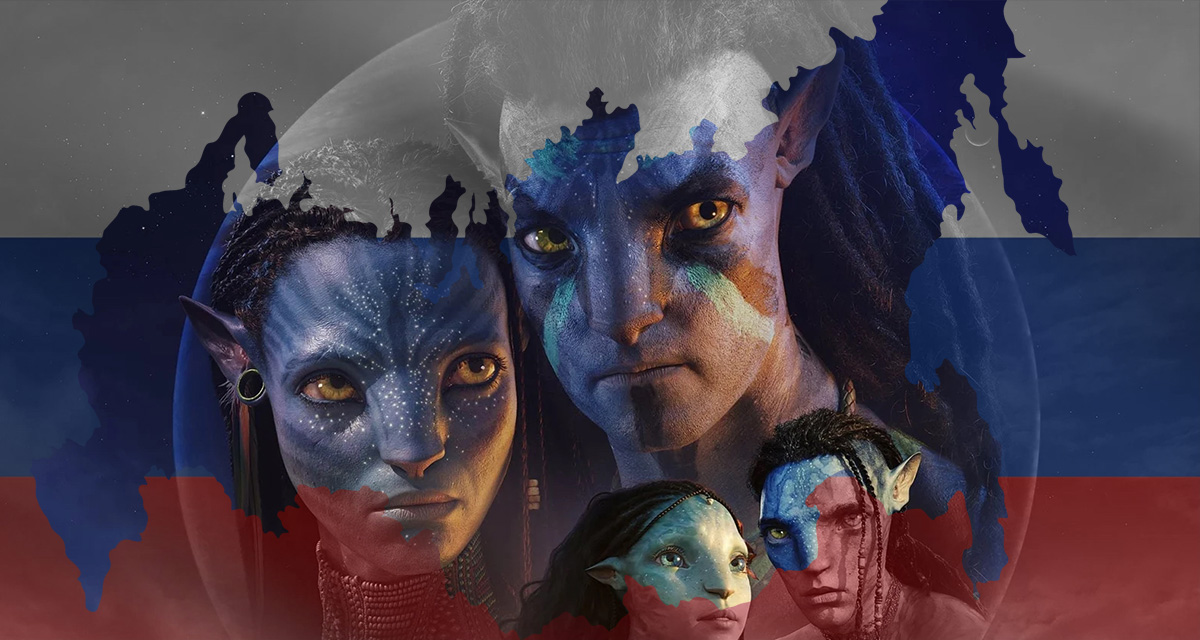 Russian Cinemas Planning to Screen Pirated Copies of “Avatar: The Way of Water”

Plans are underway across Russian cinemas to show high-quality pirated copies of the much anticipated “Avatar: The Way of Water.” It should go without saying that, despite the ongoing sanctions against the country over its invasion of Ukraine, such a move would be blatantly illegal and violate all kinds of international copyright laws.

Izvestia is reporting that the Russian Association of Theater Owners (ABK) is intent on legalizing the distribution of the “Avatar” sequel, in direct opposition to the wishes of its copyright holder, 20th Century Studios. Several cinemas across Odintsovo, Obninsk, Pushkino, Rostov and other cities near Moscow have said they will show the film as soon as there is a copy of acceptable quality available. Unlike “Black Panther: Wakanda Forever,” none of these cinemas seems to have actually posted tickets for sale on their websites.

Obtaining a copy is not cheap for theatre operators who can pay anywhere from RUB 50 thousand (USD $790) to RUB 1 million rubles (USD $15,820), depending on the quality. Some are cam-corded versions, others higher quality digital copies. Nobody knows where the higher quality DCPs are sourced from and there is a great deal of secrecy surrounding the copies as one might expect with any kind of contraband. The Russian government is reportedly working on compulsory licensing legislation so that the country’s cinema operators can show movies without the approval of any given copyright holder.

A trio of European cinemas has installed the CINITY Cinema System allowing moviegoers to see “Avatar: The Way of Water” with extra clarity and dynamic range. For those unfamiliar the new technology, the system was developed over a three-year period by CINITY, in collaboration with Christie. Its claim to fame is the way it blends 4K, 3D, high brightness, high frame rate, high dynamic range, and wide color gamut for an eye-popping display, while paring its images with immersive sound.

You’re in luck if you happen to live near Cineplex Cinema in Aachen, Germany, Arena Cinema in Zurich, Switzerland, and the Arena Cinema in Geneva, Switzerland, which all now have the CINITY Cinema System installed, allowing European audiences the chance to experience what the technology has to offer for the first time.

“It’s amazing to see the CINITY Cinema System reach European shores, marking another stage in the progression of this exciting cinema technology,” said Adil Zerouali, senior sales director for cinema, Christie. “We are honored to be involved with CINITY in developing the latest technologies to drive performance ever higher, as we work together to continue to push the boundaries of theatrical presentation and audience engagement… I’m looking forward to hearing the feedback from European audiences.”

With 2022 winding down, Gower Street Analytics, a leading film industry technology and market research firm, is looking ahead to 2023 to take its first stab at coming up with a global box office estimate for next year.

The company believes that 2023 box office will climb to USD $29 billion, a 12% gain over the current year if 2022 remains on course for an approximate $25.8 billion global box office. This year, the post-pandemic box office climbed at least 21% over 2021, but that’s not saying much since movie theatres around the world were closed for large chunks of last year due to local health regulations. That caused studios and indie distributors to hold most of their titles until 2022 or send them straight to streaming services.

If Gower Street’s projection holds it would suggest the industry will need to wait until at least 2024 to see a full return to pre-pandemic global box office levels. The company’s 2023 forecast is still 27% behind the average of the last three pre-pandemic years (2017-2019) at current foreign exchange rates. This timing is what several studio executives have outlined for us during recent CJ Cinema Summit sessions.

To celebrate two of India’s greatest passions – movies and food – the country’s leading multiplex chain, INOX Leisure Ltd (INOX) published its first ever “Cinema Food Report” detailing the food consumption habits of 70 million Indian moviegoers at the cinema chains theatres during 2022. The report brings out some extremely interesting insights and trends drawn from the food and beverage choices of cinephiles who visited 167 INOX cinemas located in 74 cities throughout India.

The Cinema Food Report was unveiled at the Food for Thought Fest at GMR Aerocity, New Delhi on 17th December 2022 by Sh Uday Mahurkar, Information Commissioner, Government of India. INOX offers its consumers, a vast array of thoughtfully curated food choices that go well beyond popcorn, though the company sold 863 tons of the world’s favorite movie theatre treat last year. The exhibitor also served 1.94 million samosas and 1.1 million dim-sums. And it turns out moviegoers at INOX are just as apt to drink Coca-Cola (to the tune of 3.8 million litres) as they are to slurp tea and coffee (2 million cups).

Alok Tandon, CEO, INOX Leisure Ltd is hoping the study can help the company refine its F&B menus. “The Cinema Food Report brings forth, some useful comprehensions, that will help us to serve our guests better,” he said. “These interesting observations, also depict the depth and breadth of our menu choices, and the level of efforts put in by our teams across India, to delight our patrons. With constant innovations, re-engineering of offerings and a strong intent to serve and delight, we have been taking our food story to newer heights, and this Report is just the right testimony to that.”