For anyone who took the Christmas and New Year’s holidays off, welcome back. We hope your 2023 is off to a productive and fruitful beginning.

For those of you who may have worked through the holiday break, such as the hundreds of thousands of ushers, cashiers, servers and concession stand workers who staff the world’s movie theatres, thank you for keeping our industry running smoothly. If box office receipts are any indication, filmmaker James Cameron kept you extremely busy with everyone coming to see his latest, “Avatar: The Way of Water.” It’s almost as if 13 years hadn’t passed between his hit 2009 film “Avatar” and its sequel.

I suppose we should also thank senior management at AMC Theatres for not letting us forget what awaited us in the new year by providing us with a constant stream of headlines and tweets about their latest achievements, appointments and financial transactions. To be sure, this is simply a little inside-industry ribbing, as while our hearts went out to AMC’s public relations department for working over the holidays, we were glad to learn about any and all developments happening at the world’s largest motion picture exhibitor. Though given that movie theatres is kind of our beat, we’re always happy to hear from any exhibitor, large or small, no matter the time of year.

All of this being said, while for most the holidays are all about family, friends, decompressing and new beginnings, for many working in exhibition it appeared to be mostly about the A, B C’s. That would be “Avatar” and AMC, box office and Cineworld.

“Avatar: The Way of Water” and the box office are somewhat tied together, in that the sequel is helping the box office recover from its pandemic lows. Gower Street Analytics took it’s first back-of-the-envelope pass at 2022 figures and it looks as if global box office for the year will come in at USD $25.9 billion. That’s 27% higher than 2021 but 35% below the pre-pandemic average. The good news is that the “Avatar” sequel continues to generate significant ticket sales into January and looks likely to do so for the rest of the month as it passes the USD $1.5 billion mark.

Actually the first full weekend of January gave us a great surprise thanks to “Megan”… oh, I mean “M3gan.” It’s amazing how a killer trailer and a good movie can attract audiences to movie theatres. The USD $12 million horror has already earned USD $45 million globally and helped North American box office to a surpass $100 million this weekend. If we only had a Liam Neeson action thriller for the last week of January we’d really be set.

Imagine what “Avatar” and “M3gan” would be making if some cinema operators weren’t forced to cap their attendance due to lack of staffing. The screening of “Avatar: The Way of Water” I attended in the San Francisco bay areas was listed as sold out, though when the lights dimmed only 62 of the 120 seats were filled. Upon bringing this to management’s attention I was told they weren’t filling auditoriums due to a staffing shortage. I’ve heard this from at least four large North American exhibitors.

Meanwhile, over the past two weeks it seemed as if AMC Theatres wanted to keep us up-to-date on all but their staffing situation. Starting 19 December the company published four press releases during a time when most aren’t paying much attention to news items. As I explain in our most recent piece about AMC, there was good reason for the company to be sending out press releases over the holiday, if only to keep Wall Street short sellers on their toes. The financial machinations AMC is going through now are too complicated to do them just in the Marquee, but suffice to say, 2023 may prove to be a make or break year for the exhibitor.

One bit of news AMC told us not through a press release but rather an SEC filing was that they had ceased negotiating to take over certain assets of the currently bankrupt Cineworld. This was the first official confirmation that AMC had been talking to Cineworld’s lenders. In turn, it forced Cineworld, the world’s second largest exhibition chain, to tell the bankruptcy court that they had no intention of selling off the company’s assets piecemeal.

The year begins in earnest this week with the International Cinema Technology Association’s Los Angeles seminar series. This is the first year that the Cinema Foundation is partnering with the ICTA on the event. We’ll be present so be sure to say hello if you see us wandering around. In the meantime, be sure to check out how James Cameron used Dolby technology on the “Avatar” sequel over at their website. 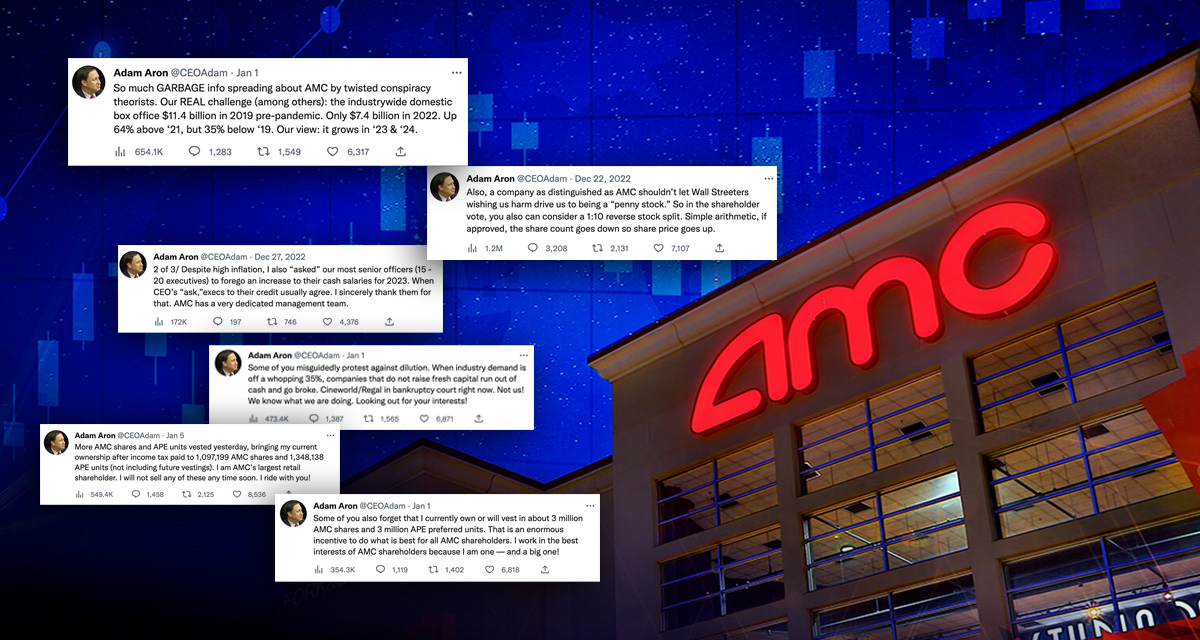 The Long and Short of AMC’s Financial Manuevers

There was no rest for the public relations department at AMC Theatres this holiday season. With most motion picture executives around the globe having already left the office for at least the two weeks surrounding Christmas and New Years, the senior management of the largest exhibitor in the world was hard at work buttressing their finances, reducing their debt, naming new board members, officially ending negotiations to acquire specific theatre assets from the recently bankrupt Cineworld, announcing a reverse stock split and taking over a shuttered Arclight Cinemas location in Boston.

All the while AMC’s chief executive officer, Adam Aron, took to Twitter like a far more rational and reasonable Elon Musk to say, in-part, that he would not be receiving a rase in 2023, nor would he be selling his shares of AMC stock. Indeed, all of this frenetic activity was surely designed to improve the stock price of the the company’s common shares and AMC Preferred Equity (APE) shares, as much as it was to signal to Wall Street that betting against AMC is very short sighted (a pun that will be made more clear upon reading our latest piece on the company).

Gower Street Analytics estimates 2022 Global box office hit $25.9 billion through December 31. This represented a +27% gain on 2021, continuing global box office recovery. However, it still shows a significant way to go to return to pre-pandemic levels, coming in -35% behind the average of the last three pre-pandemic years (2017-2019) – a loss of approximately USD $14 billion at current exchange rates.

China, meanwhile, relinquished its box office crown after being the top market in both 2020 and 2021. Instead, North America once again dominated the box office delivering an estimated $7.5 billion in 2022, 65% over 2021. China is calculated to have finished at approximately $4.33 billion, putting it -36% behind 2021. It is one of only three markets Comscore and Gower Street track to show a year-on-year loss. China finished at close to half (-49%) its pre-pandemic three-year average.

“Avatar: The Way of Water” Crosses $1.5B to Become 10th Biggest Film

“Avatar: the Way of Water” has crossed USD $1.5 billion in total global box office, thus overtaking “Top Gun Maverick” and also becoming the 10th biggest box office hit of all time. The film is thus the highest grossing film to have been released in 2022, even though the earnings continue in the new year, similarly to last year’s roll-over of “Spider-Man: No Way Home.”. Thus “Top Gun Maverick” remains the biggest earner of 2022, with USD $1.49 billion global box office.

The Avatar sequel is the number one film in 45 countries and only faced minor competition from “Puss in Boots: the Last Wish.” The Dreamworks animated title topped the cinema charts in some Latin American and Eastern European markets. The takings for “Avatar: the Way of Water” would have been bigger, were it not for Russia being blocked from formally releasing the film. Pirated copies of the films have been playing in smaller Russian cinemas and some larger chains are also preparing to play it from 12 January onwards. In its biggest markets the film has earned USD $475.5 million in the United States, USD $162 million in China and USD $54.3 million in the United Kingdom and Ireland.

Expectations are that “Avatar: the Way of Water” will land in the top five films of all time. According to Variety it is estimated that the movie will have hit break-even at USD $1.5 billion, thus the the release of further installments is practically guaranteed. The film also helped Disney become the biggest global distributor for a seventh year in a row with a total 2022 earning of USD $4.9 billion. The “Avatar” sequel is also the first film since “Spider-Man: No Way Home” to earn USD $1 billion at the international box office and the only film of 2022 to do so.

Cineworld has provided an update on its bankruptcy process in which it stated that it does not plan to sell of part of its assets. The cinema operator also denied having been in discussions with AMC about selling it some of its cinemas. Instead Cineworld plans to launch a formal sales process later this month (January) to find a buyer for the whole of its operations.

AMC had stated prior to the Christmas holiday that it was in discussions with Cineworld to acquire some of the theatre assets in USA and Europe, but had walked away from the discussions and did not provide more details. AMC did clarify that these discussions did not involve and confidential or non-public information. AMC also announced that it was raising capital for debt reduction and other purposes around the same time.

Cineworld has been in a perilous state financially after undertaking an aggressive expansion plan that saw it move into the US, quickly followed by an aborted deal in Canada. Covid then struck, leaving the business gathering dust while its debts still needed to be paid. The reopening of the cinema industry post-pandemic has not gone smoothly and Cineworld has found itself on borrowed time.

Despite the strong performance of “Avatar: the Way of Water” and earlier films such as “Black Panther: Wakanda Forever” Cineworld warned its shareholders that there is still “no guarantee of any recovery” and that their value of their holdings might still be wiped out completely. A lawyer representing Cineworld told the US Bankruptcy Court in Houston, Texas, that the lacklustre box office performance of the second half of 2022, when many films were pushed to the following year, meant that the company’s restructuring efforts had been hindered. 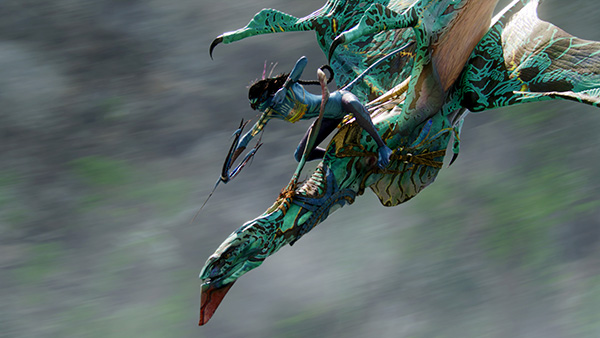 When Warner Bros. showed the trailer for the film adaptation of Lin Manuel Miranda’s Broadway musical “In the Heights” at Cinemacon in 2019, it caused quite a stir among the exhibitors in attendance. Unfortunately, the COVID pandemic delated the release of “In the Heights” by a year, but it is finally coming to theatres in June. Chu explains the benefits of using Atmos.