Cinema is Experience; a USD $100 million experience judging by the deal that sees London-based Secret Cinema sold to Broadway ticketing major TodayTix. While large cinema chains are facing debt, restructuring and rollercoaster rides on the stock market (pace Cineworld, Vue, AMC and Dadi), it is encouraging to see a tech company prepared to invest a nine-figure sum in a “cinema” operator that does not own a single cinema screen and specializes in re-releasing old and recent film and TV shows.

For those that have never experienced Secret Cinema, it really is like stepping into the film you are about to watch. This is why you are encouraged to dress like an extra from the film of your choice, whether “Casino Royale” (dinner jacket or cocktail dress) or “Dirty Dancing” (think Catskills teeny bopper). You are not allowed any selfies or photos with your smartphone once inside. And if you think that popcorn or a glass of wine in the cinema is expensive, let me present you with the menu for Lou’s Cafe, where there are no 25¢ hamburgers, 30¢ ham and cheese sandwiches, or 15¢ chocolate sundaes, as they were in the original “Back to the Future.” But credit cards and ApplePay are happily accepted.

Despite the high prices the events have been such a success that even though they just host one screening per night in a single location, that was often enough to propel the re-release into the Top 10 of the box office in the United Kingdom, as was the case with “The Empire Strikes Back” in 2015. Secret Cinema has come a long way since its original “Tell No One” days when the choice of the film really was a secret and a surprise. It has expanded geographically to Los Angeles and Shanghai, it has embraced both television (Netflix), gaming (League of Legends) and home-based events during the pandemic. It has been innovative and not afraid to take chances, while developing smart partnerships with content owners in Hollywood and beyond, as well as premium brands.

There have been many imitators, but none have been as big a success as the original Secret Cinema. Notably even major cinema chains got in on the act in pre-COVID days, with Kinepolis holding an event called “Secret Cinema: the Nun” for the 2018 horror film. Yet the original Secret Cinema has stayed a step ahead by constantly evolving and even surviving the pandemic, albeit with a little help from the British taxpayers that is now paying off for them.

Most of the Secret Cinema events have taken place in what was the industrial wasteland of East London. Soon it looks set to get a permanent home for open-ended running events in both London and Los Angeles. Interestingly, also located in East London on a regenerated industrial site that is now the former Olympic Park is ABBA Voyage, where people pay good money to interact with “ABBAtars” of the Swedish pop group in what is effectively a simulacrum of a pop concert, only with drinks, sponsors and middle-class premium comforts. Much like Secret Cinema.

Cinema has not yet recovered to pre-pandemic levels, with the exception of a few markets (we are looking at you, India and South Korea), but after having been locked up for the better part of two years, people with money that are not worried about the cost-of-living crisis are spending big sums on Bruce Springsteen concerts and Hamilton tickets on Broadway once again. In this regard it makes sense for an operator like TodayTix to spend big bucks buying Secret Cinema.

Investors might not yet line up to buy Cineworld, but we should not be surprised if the next deal is instead for a company like Luna Cinema, another London-based experiential cinema operator that holds open-air screenings across the UK. It’s got old films, premium food and beverage, brand partners and you don’t even have to dress up like the “Dirty Dancing” cast unless you want to – just bring a picnic blanket. Because the Secret Cinema deal shows that nobody, not even COVID or recession, puts Premium in the corner. 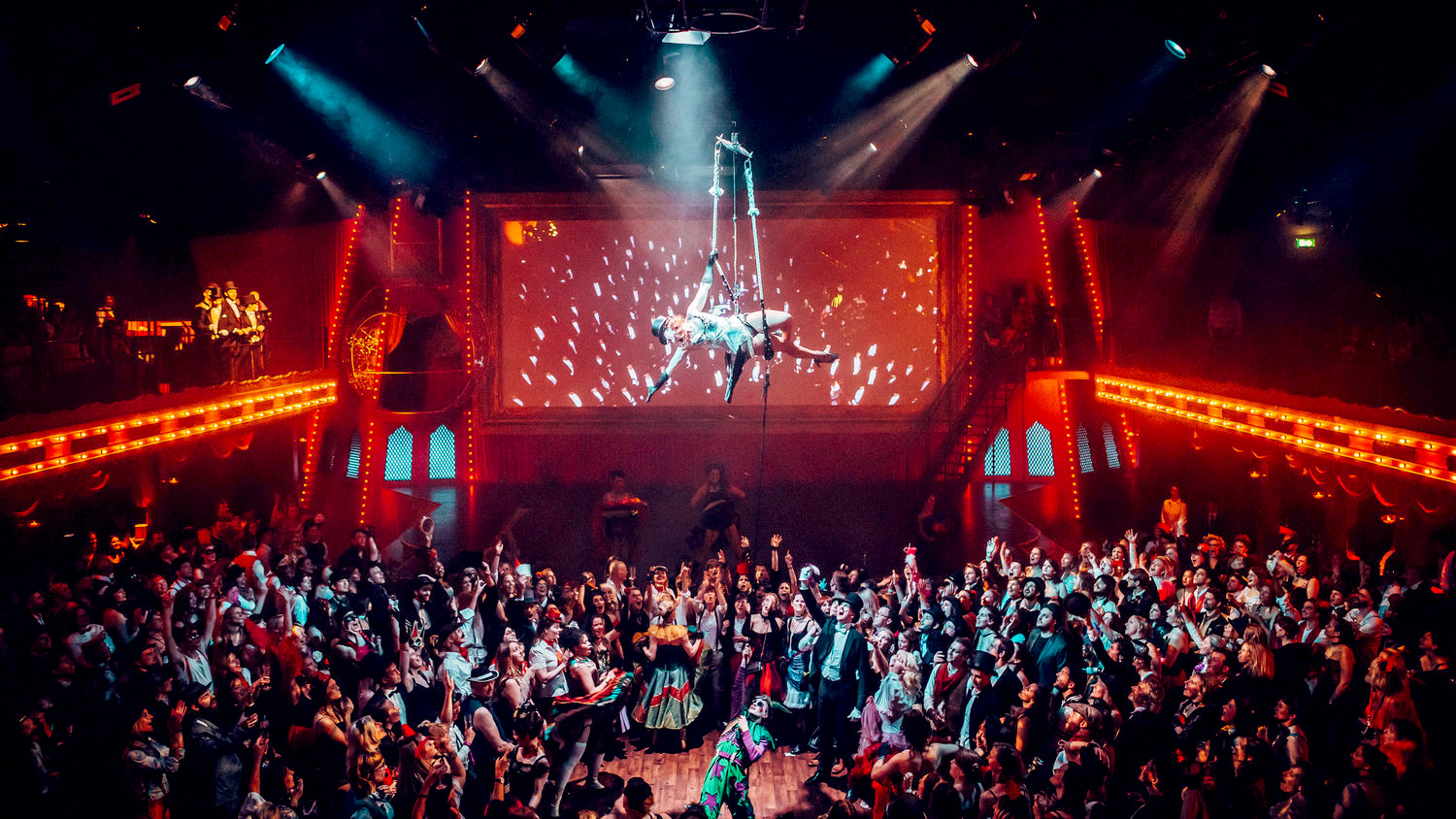 Secret Cinema organizes location-based immersive experiences, based on well known film and television IP, in which the audiences dress up and interact with an environment and actors as if part of the film. Such elaborate shows cost up to USD $10 million to stage, with tickets costing GBP £35 to GBP £130 (USD $38 to USD $142) and additional revenue from F&B and sponsorships. Over 70 events have been held based on IP such as “Stranger Things,” “Casino Royale,” “Blade Runner,” “Bridgerton,” “Back to the Future” and “Star Wars.” Over one million tickets have been sold to events to-date.

TodayTix, which specializes in tickets for West End (London) and Broadway (New York) stage productions, plans to expand Secret Cinema as a continued stand-alone operation based in London and Los Angeles.

Full details of the acquisition can be found on Celluloid Junkie.

Several more European countries are launching their own national cinema days following the success of the cheap tickets promotional offers that have taken place in UK, US, Canada, Ireland and most recently Germany. The promotional efforts are all taking place mostly during a time with no significant Hollywood tentpole releases, meaning audiences can catch up on older blockbuster films or smaller recent releases, while also getting to see trailers for upcoming titles.

Sweden held Stora Biodagen (Big Cinema Day) on Sunday 18 September when all cinema tickets were half price. The event attracted 150,000 admissions and was such a success that popcorn sold out at the Sture multiplex operated by Odeon-owned Filmstaden in central Stockholm. Fortunately a bike dispatch saw more popcorn delivered in time.

The Netherlands will not hold its promotional event until November, but for three days between Wednesday 2 November and Friday 4 November people will be able to watch films for EUR €6. Cinema participation is not mandatory and it has not been decided if premium formats such as IMAX and 4DX will be included. Kinepolis has confirmed its participation, while Vue and Pathé are expected to announce their decision soon.

The campaign will be given shape and content by the NVBF in collaboration with the National Bioscoopbon Foundation, which will lead the way. Selmore Creative Agency, which also played a leading role in the campaign for the new National Cinema voucher, will develop and present campaign proposals. This is confirmed by Ivar Schutt, director of the Nationale Cinemabon.

Italy is holding its Cinema In Festa 18-22 September when cinema tickets are EUR €3.50. According to WantedinRome, “The Cinema in Festa initiative was launched by culture minister Dario Franceschini ahead of the 79th edition of the Venice Film Festival. Inspired by France’s Fête du Cinéma, the cinematic event will be held biannually – in June and September – every year for five years.” Over 2,000 cinemas across Italy will participate, with appearances by local actors and directors. While the National Cinema Day this month has been a success in English-speaking countries, it is worth remembering that promotional cinema festivals have been held for many years in France, Spain, Switzerland and other European market.

Meanwhile the Multiplex Association of India (MAI) has postponed the country’s much anticipated National Cinema Day by one week until 23 September on account of the success of Bollywood (Hindi-language) blockbuster hit “Brahmastra: Part -1: Shiva.” Over 4,000 cinemas will be participating, making it the biggest national cinema day campaign by anticipated admissions.

Korean cinema recovered to 94% in the first six months of this year compared to January 2019, the last full pre-pandemic month. The study was undertaken by Shinhan Card Big Data Research Institute based on the usage of loyalty members of Lotte, one of Korea’s three big cinema operators. Korea is one of the few markets in the world that kept cinemas open in the early months of the pandemic, though subsequent closures and restrictions on F&B consumption has impacted attendance significantly.

Despite predictions that streaming would negatively impact cinema going after the pandemic, the study found the opposite: cinema attendance was higher amongst those that used streaming services (38%), compared to those that didn’t (19%). The overall use of premium formats such as VIP auditoriums, family auditoriums, and private screens increased by 8.5% compared to the first half of 2019. Concessions consumption increased  317.2% compared to the first half of 2021 due to the lifting on restriction of F&B consumption in cinemas.

The India-controlled territory of Kashmir has a working cinema for the first time in over two decades, after movie houses were closed during the region’s violent insurgency. Indian multiplex operator INOX cut the ribbon at the multiplex on 20 September in Indian Kashmir’s largest city, Srinagar. The opening film was “Lal Singh Chaddha,” a Bollywood remake of “Forrest Gump,” staring cinema icons Aamir Khan and Kareena Kapoor. Kashmir was a popular filming location for Bollywood films before the unrest.

The cinema will open to the public on 30 September. The lieutenant governor of Jammu and Kashmir, Manoj Sinha, who was guest at the opening ceremony, called it a “historic” day. INOX tweeted that the opening represented the “beginning of a new era.” A driving force behind the re-opening of a cinema in Kashmir was businessman Vijay Dhar, who partnered with INOX to make the project possible. Speaking to India TV he said:

My dream is to see that the Valley regains its touch of paradise. I remember the day, when my theatre closed down in 1990.  Sunny Deol’s movie ‘Yateem’ was being screened. Terrorism made Kashmir a ‘yateem’ (orphan). Our aim is to bring back the shine to Kashmir Valley and repay the debt to our land of birth.

The multiplex project took five years to complete. The three-screen cinema with a total of 520 seats is located in the high security zone, Shivpora, near the Badami Bagh cantonment. There were just 15 cinemas across the Kashmir Valley, nine in Srinagar and six across the rest of the district.

In 1989 cinema operators were warned by militant outfit Allah Tigers to shut their screens or face consequences. As of 1 January 1990 all cinemas in Kashmir had closed. Three cinemas were reopened in 1999, but a terrorist attack saw one person killed and 12 injured in a hand grenade explosion at the Regal cinemas. All three cinemas promptly closed. Cinemas were converted to security camps, hotels and hospitals. There is a strong hope that cinema is here to stay in Kashmir this time. 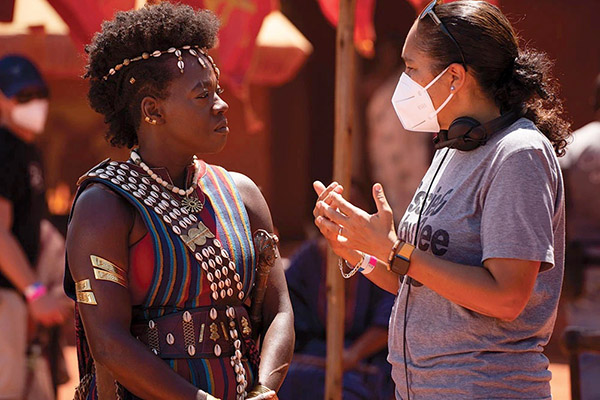 Uncover the strength of incredible female warriors in The Woman King

Listen to director Gina Prince-Bythewood talk about the ways Dolby Vision and Dolby Atmos allow audiences to feel both the power of the women and the intimacy of the sisterhood.