What do “The Exorcist,” “American Graffiti” and “Live and Let Die” have in common? Film history buffs will know that they were the films that American cinema audiences flocked to in 1973. This was the last time we saw an energy shock and price inflation comparable to today’s global situation. The timeless quality of the many great films of that year puts the then struggles of the cinema operators – not to mention the challenge of just filling up the tank of your car to drive to the cinema – in the shade. Cinema survived this challenge too.

Half a century later cinema operators face wage inflation related to staff recruitment and retention, shortage of spare parts, wait times for just about any type of equipment, food price rises for a now significantly expanded concessions menu, plus higher energy costs just to keep the (projector) lights on. COVID-induced loans, unpaid landlords and government assistance will also need to be paid off. Meanwhile households are facing unprecedented pressures on disposable income. Did we mention that there is also a war raging? Or as some still call it, a “special military operation.” The only blessing is that Hollywood studios are not demanding a more favourable rental split, so at least films are not “costing” exhibitors any more, at least for now.

Given all of these financial obstacles, it would be understandable if cinema operators were to raise prices in line with other industries. Will anyone even notice fifty cents extra on popcorn or a soda, not least when petrol prices are far dearer? AMC had no problem hiking ticket prices last year by 50 cents and increasing concession prices in tandem. CEO Adam Aron even went against the grain by touting the increases to investors during the company’s second-quarter earnings call in August of last year.

While it is tempting to adjust prices across the board as a short term fix, it will not tackle root problems. There are still large sectors of the public that remain to be tempted back to the big screen. The success of Bond, Spider-Man and lately Sonic should not lull anyone into the complacency that if you program it they will come. Cinemas need to grow revenue primarily by growing attendance. This does not preclude the better deployment of dynamic pricing, premium experiences and selective price increases.

Exhibitors already control the tools for ensuring that cinema attendance does not just recover but exceed pre-pandemic figures, they are just not utilising them widely enough. Better use of data, redeployment of staff to front-line customer focus, creating a perception of value for money (particularly with premium offerings) and constant messaging that cinema is a safe and fun form of escapism for every age bracket; this is what cinema needs most.

This year will create its own crop of timeless film classics that will be looked back on in years to come without any association to the economic and geopolitical turmoil that was talking place in the world outside. While cinema creates escapist magic, it cannot escape the reality of profit and loss. It is important not to let short term thinking and pressures shape long term strategy. “You mustn’t be afraid to dream a little bigger darling,” as Tom Hardy’s character put it so memorably in “Inception.” Exhibitors need to dream big and plan accordingly.

Filmstaden, the largest cinema chain in Sweden, has announced a ban on bringing all outside sweets, snacks, drinks and concessions into its cinemas. Though the exhibitor had previously allowed certain food and beverage items into its theatres, such activity is, as they say in Sweden, förbjuden (which for the non-Swedish speakers in the room means “forbidden”.)

In an official statement, Filmstaden’s public relations manager Caroline Hellström explained, “All forms of sweets, soft drinks and other types of food that were previously acceptable no longer apply. This is because sales at the cinemas are included as part of our business. As this is still new, I understand if it can come as a minor shock to those who have not yet heard the news.”

Let us translate from the Swedish once again. We believe Filmstaden is saying, “Hey, we’re a movie theatre that shows films and sells concessions. We’re recovering from being closed for months on end due to a pandemic that proved to be an existential crisis. While in the past we may have looked the other way when you snuck in the odd can of Coca-Cola, that really isn’t appreciated since selling such items is how we earn revenue. Would you bring your own food to a restaurant?”

The announcement sparked headlines and outrage on social media, where all outrage seems to live in current times, against the ODEON Cinemas Group owned chain. Most customers complained that Filmstaden’s prices for concessions are so high that they will choose to patronize different cinemas in the future.

French Cinema Admissions in March Worst in Over 20 Years

French cinema continues to struggle to recover after the pandemic, with total admissions in March reaching just 13.19 million, the worst figure since 1999. This bad news comes despite the lifting of the last COVID-related restrictions, such as the wearing of masks in auditoriums and showing a vaccination certificate. This was also the period of Printemps du Cinéma (Springtime for Cinema), a promotional campaign from 20-22 March when all cinema tickets were EUR €4 euro, which attracted 2.17 million admissions.

According to data from the CNC movie theatre attendance in France during March of this year dropped 29.7% from 2019 (18.75 million), the last year of comparable figure before the pandemic. One has to go all the way back to 1999 to find a lower figure (12.6 million). Last year attendance was only 5.95 million, though this was in the middle of the COVID-19 pandemic. The total for the first quarter of 2022 twas 36.9 million admissions in total, compared to 38.3 million in 2020 and nowhere near the 59 million admissions of Q1 2019.

Only five films achieved more than 500,000 admissions in March and “The Batman” was the only film to have passed the one million admissions mark (2.8 million in total). By way of comparison, there were 15 films that had more than 500,000 admissions in March of 2019. Hoped-for local release “Notre-Dame Brûle” only managed 660,000 tickets sold. Despite the relative success Printemps du Cinéma, the following week 23-29 March saw just 1.7 million admissions, the lowest number since June 2021.

Moviegoing In Brazil Drops 46% After Pandemic

A new study by the Boca a Boca Research Institute in Brazil is reporting that moviegoing in the country has declined significantly since the pandemic began. The survey included those that identified as casual moviegoers, meaning they would attend one movie per month. Prior to the pandemic 80% of this group would visit cinemas on average once per month. That number has dropped to 34% in the most recent report.

The survey, which was conducted in March of this year, included 216 participants aged 14 to 66, with women making up 60% of respondents. Results indicate that 23% of those surveyed go to the movies at least once a month, 6% go twice a month, and 5% go three more times. Previously, these figures were 36%, 26% and 18%.

Insecurity over health issues related to the pandemic seemed to be a major driver with 23% citing as the reason for avoiding movie theatres. The combination of mask mandates and low vaccine levels were specifically mentioned, though the latter is quickly becoming a non-issue as a majority of Brazil’s population becomes fully vaccinated.

The good news is that respondents are looking forward not only to the upcoming slate of big Hollywood action movies, but even more so to local productions. The Boca a Boca Research Institute is the leading company in Brazil tracking the theatrical film industry, including awareness of movie releases, test screenings and marketing material surveys.

AMC is wasting no time in bringing its new cinemas online with the Marquis 16, Landmark 8, Majestic 6 in Connecticut and Annapolis Mall 11 expected to open the weekend of 21 April. The remaining theatres are expected to open by the end of April.

In a press statement announcing the deal, AMC CEO Adam Aron said, “Our theatre acquisition strategy makes AMC a better and stronger company as we move forward on our glidepath to recovery. Acquiring these locations is especially notable for our expansion in Connecticut, where we are more than doubling our presence.” 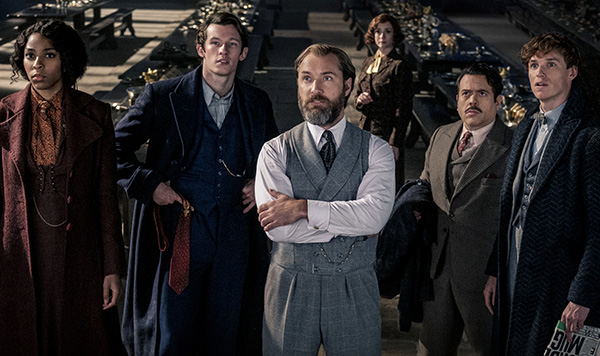 Hear how Dolby Atmos elevated the sound of Fantastic Beasts: The Secrets of Dumbledore

In a world of wizardry, each character was brought magically to life with Dolby Atmos. Learn more about the sound creation of the third installment of Fantastic Beasts.