Four weeks ago, when my 17-year-old daughter asked me if she could borrow one of my suits to to go see “Minions: The Rise of Gru” with a group of friends, I readily agreed. I did however ask why she needed a men’s suit and tie to attend a Saturday night screening of an animated film geared toward children. At the time she told me her entire group of seven friends decided it would be fun to dress up and go to the movies. Exhibitors have been trying to get teenagers and older adults back into theatres after the COVID pandemic, so if one of my business suits had to risk being stained with popcorn grease and nacho cheese, it would be my small way of contributing to the industry’s recovery.

Last Saturday, when my daughter came home she told me how much everyone in the sold out audience loved the latest Minions movie and how afterwards her entire group of friends went to IHOP to dine on the Minions Menu and slurp up Ba-Ba-Banana Milkshakes. She reported that most of the crowd in attendance was decked out in prom dresses, tuxedos and dress suits. Again, I asked why and she wasn’t sure though figured it had something to do with one of the previous movies. With a comment that might cause alarm in most responsible parents, she simply stated, “It’s just something everyone is doing.”

By Sunday morning she had figured out that the whole dress up thing for Minions was part of a viral TikTok trend that spread around the world. This was the good kind of viral trend, not like the kind that caused a global pandemic. Given how much time my daughter spends on TikTok, I’m surprised she didn’t know about the trend earlier. Perhaps she simply didn’t want to admit it when asking to borrow one of my suits since she knows my distaste for that particular social media platform.

By Sunday evening she was showing me how the so-called #GentleMinions trend had crossed over to Instagram. She wanted to know why movie theatres were now “banning” anyone showing up to see “Minions: The Rise of Gru” in formalwear. “Aren’t, like, all the movie theatres trying to get audiences back into theatres,” she asked. “You’d think they’d appreciate all the free advertising.”

To be sure, most cinema operators were grateful for the social media trend which sent thousands of teenagers to movie theatres over the past week in countries all over the world, helping the “Minions: The Rise of Gru” open to USD $202 million worldwide. However, there are always a few bad bananas in the bunch and that seemed to be true of the GentleMinions at select cinema locations.

While a majority of moviegoers simply showed up in suits and fine dresses to take photos inside cinemas which got posted and shared via social media, a small minority of troublemakers disrupted screenings by being rowdy, generally misbehaving and actually causing damage to auditoriums. There were stories of some teenagers showing up with bags full of bananas, the Minions favorite food, and throwing them around the auditorium as they filmed themselves for social media posts. I won’t go into how some of these posts had clips of the film running on the screen inside the auditorium, which opens up a whole issue surrounding copyright infringement.

One week after “Minions: The Rise of Gru” hit theatres, mainstream media has picked up the GentleMinions story and exhibitors are wondering how to come up with social media strategies that can repeat the phenomena. Those exhibitors that undertake the effort will find it very difficult to capture such lightning in a bottle, especially with TikTok wherein an opaque algorithm controls what videos get shown most often. The GentleMinions trend was driven by an entire generation who have grown up with the “Despicable Me” franchise and are now teenagers able to buy their own movie tickets. That element is rarely available to propel marketing campaigns.

It’s much easier for a cinema operator to market through Instagram, Facebook and Twitter with more predictable repetitive results. For those exhibitors who may be new to social media marketing, or are experimenting with techniques, if there is one thing to take away from the GentleMinions trend, it’s that every cinema should have some way of letting patrons share their moviegoing experience. Whether it’s taking photos in front of a step-and-repeat, a promotional standee or with their feet up in the latest plush recliners, your customers can be your greatest marketers, reaching potential customers who aren’t on your mailing lists or Facebook page. Put up signage that prompts patrons to post on social media using your suggested hashtags. And be sure to retweet, like and respond to such posts when they show up in your social feeds.

Just always be mindful, there are plenty of virtual banana peels to slip on when marketing via social media, and just like real banana peels they aren’t always seen at first and show up when you least expect them. 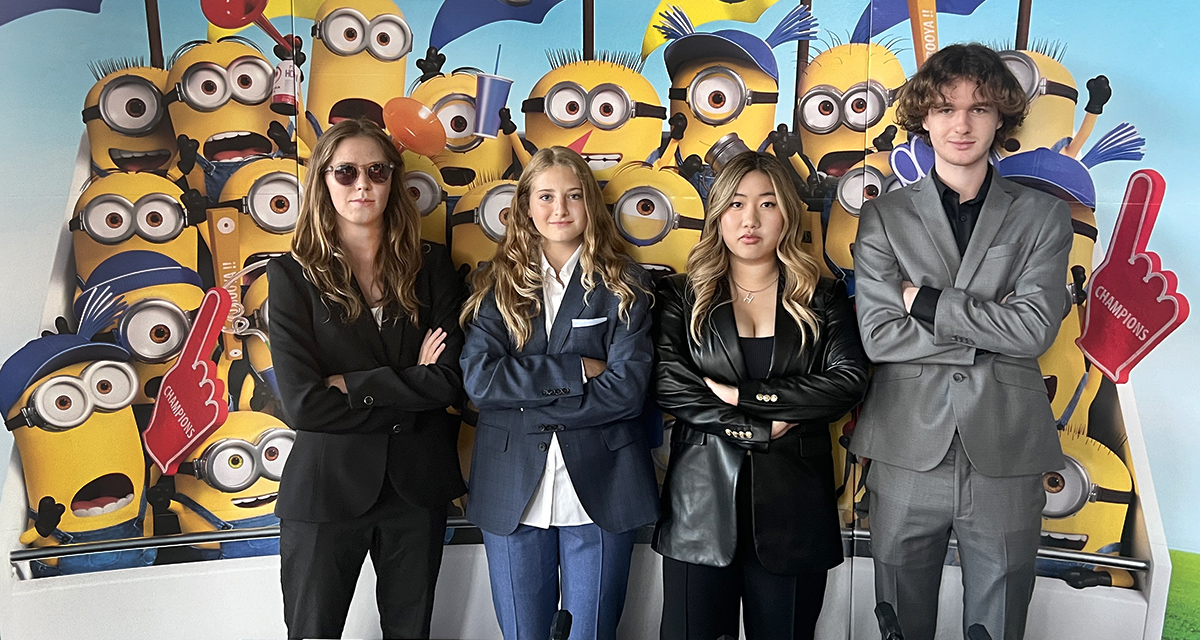 The record-breaking run of “Minions: The Rise of Gru” over the July Fourth weekend has been marred by a viral TikTok trend that has led to the disruption of some cinema screenings. The #GentleMinions trend has seen youths turning up at screenings wearing suits and filming themselves clapping and cheering to the film. While some of these antics have been good natured, others have resulted in disruptions, complaints, messy auditoriums and refunds, as well as raising issues about copyright protection.

The problems seem most pronounced at cinemas in the United Kingdom, which has led some exhibitors to ban youths dressed up in formalwear from entering the premise, while other cinemas have issued warnings to audiences with such groups prior to screenings. AMC-owned Odeon Cinemas appears to have taken things furthest with an outright ban on “any group of guests in formal attire” from attending screenings of the minions film.

This past week movie theatres throughout France celebrated the annual La Fête du Cinéma – from 3 July through 6 July moviegoers could purchase EUR €4 tickets to current theatrical releases. This year the promotion comes at a moment when cinema attendance is down throughout the country by 25-30% from pre-pandemic levels.

There has been some public pushback on the price of movie tickets in France which average EUR €7.05 but can go as high as EUR €15 during peak times. Richard Patry, President of the National Federation of French Cinemas (FNCF) says less than 19% of moviegoers in France ever pay full price.

“Find me a theater ticket for less than EUR €7 euros. Go to the opera for less than 7 euros,” he said. “If you lower the price of seats, we will no longer have the possibility of investing and building the premier cinemas in the world.”

Serious movie aficionados from all over the world were saddened last year when it was announced the landmark Cinerama Dome in Hollywood, California and its adjoining 14-screen multiplex would not be reopened by Arclight Cinemas after the COVID pandemic. Both Arclight and its partner company, Pacific Theatres, ceased operations in April 2021 and filed for bankruptcy shortly thereafter.

Speculation began almost immediately whether the historic Cinerama Dome, which dates back to 1963, would ever reopen again as a movie theatre or if Los Angeles had lost one of its storied cinemas for good. Those in the know felt confident the Cinerama Dome would once again open its doors since the land it sits on is owned by Decurion, the same company that owned Pacific/Arclight.

That outcome became more realistic last week when it was learned Decurion had received a liquor license to operate two bars at a complex named “Cinerama Hollywood.” The blueprints submitted to the California Department of Alcoholic Beverage Control show Decurion planning to reopen both the Cinerama Dome and the 14-screen multiplex, though though no timeline was given. The venue has been dark since the pandemic began in March of 2020.

Blockbuster releases such as “Top Gun: Maverick” and “Jurassic World Dominion” brought audiences back to cinemas in record numbers during the month of June, allowing operators such as Cinemark to report their best monthly box office since the start of the COVID pandemic. AMC is hoping to push those attendance figures even higher, announcing a program in the United States for discount Tuesdays.

The largest motion picture exhibitor in the world, not to mention the US, will make all tickets USD $5 on Tuesdays for members of their AMC Stubs programs. The promotion will run through the end of October.

Of course, premium formats such as IMAX, Dolby Cinema at AMC and Prime at AMC will require an additional fee on top of the base of of USD $5. And if that weren’t enough to get moviegoers racing to theatres on Tuesdays, in some locations AMC is offering select popcorn and drink combos for USD $5 as well. Experience the king of rock ‘n’ roll with Dolby

Listen to Director Baz Luhrmann discuss how Dolby translates the story of Elvis Presley through a transportive theatrical experience.