Anyone fortunate to have attended CineEurope last week could be forgiven thinking that UNIC’s opening-night Paella was spiced with happy powder. There was a tremendous outpouring of love between colleagues who had not seen each other for years, from studios professing their love for the big screen on the main stage and by everyone for Tom Cruise, in a surprise appearance, for having helped hold back “Top Gun: Maverick” from streaming services so that it could become a one billion dollar (and still counting) summer 2022 blockbuster.

Last October’s delayed CineEurope felt necessary, but this one felt normal. In the opening speech Laura Houlgatte and Phil Clap acknowledged, “We’re of course not yet at the levels of success we saw before the pandemic… But the strength of the recovery is clear and growing by the day.” UNIC published sobering figures for the 2021 cinema market, unveiled the re-elected board which saw Christine Berg, Head of HDF Kino (DE) join already familiar faces. There was also the sixth edition of the UNIC Women Leadership Programme, as well as the unveiling of the Top 50 European exhibitors at the UNIC reception.

The major studios were all back, showcasing a broad and diverse slate, though most of it is set for release in 2023. StudioCanal and Unifrance were there alongside the Hollywood regulars, which included a welcome return by Disney, who ended their presentation with a first-ever sneak-peek at footage from the upcoming “Avatar: the Way of Water” with four scenes shown in 3D, high frame rate and in 18- foot lamberts. It was a CINITY project that brought together Cinionic and China Film Group, powered by GDC Technology. Whether it will re-ignite the audience interest in 3D was a hot topic amongst attendees (the proverbial jury is still out). Netflix was not on stage but (whisper it) perhaps they will be next year. “Elvis” crooned and there was a welcome inclusion of this year’s Palm d’Or winner “Triangle of Sadness” in the film screening lineup.

The trade show floor was sadly still looking small, though Coca-Cola was still everyone’s favourite hangout place (thanks in part to Costa Coffee kiosks), despite it too being distinctly slimline. Taking over from Oliver Delaney at Coca-Cola, Nick Gault fronted two excellent seminars on Physical Fights Back (we liked the interview with the Swingers co-founder) and sustainability in Restoration Retail (kudos to Kinopolis for the reusable cups initiative). As always, there were several excellent seminars organised by ICTA, including on innovation, premium, marketing and technology trends, as well as a pre-conference Q&A with Phil Clapp and NATO’s John Fithian.

Show sponsor Cinionic had a good CineEurope, with the announcement of a 500 laser projector deal with India’s PVR and 51 auditoriums with Ireland’s Omniplex. The latter will be installed by CinemaNext, who also nabbed a contract with Nordisk across Scandinavia. Ireland’s Showtime Analytics brought two German deals to the show with Filmpalast and Cineplex, while Germany’s TMS and cinema software specialists EIKONA celebrated a deal for all of Kinepolis’ European cinema locations. Oma went Hong Kong, while IMAX renewed its vows with Odeon. Vista and its group of companies had a major presence, but then, it’s hard to forget their great party. Finally a special mention to Ukraine’s MAG Audio for being at CineEurope, because just like their homeland they don’t just need our sympathy but also our support and business. For a full list of ALL the announcements, hurry over to CJ Wire.

An unexpected visitor who appeared as a surprise (unlike last October, when it was a much-telegraphed secret) was Tom Cruise on stage after a clip-reel showcasing his illustrious career on the big screen. He thanked the cinema operators in attendance and they rewarded him with a five minute standing ovation. Many attendees were less happy with the crowding, particularly before the delayed SPE presentation, and less surprisingly it seems that COVID was an unwanted souvenir brought home by some attendees, based solely on a few anecdotal reports. (That said, as health experts predicted, COVID is here to stay and will be roaming around all of our industry gatherings for the foreseeable future.

Having fought off the threat of day-and-date releases, the cinema industry is learning to live with the virus, just as it is coping with shortened windows, supply chain issues, staffing challenges, fallout from Russia’s war in Ukraine and what appears to be a looming global recession. Perhaps the industry needed the Cava, camaraderie and convention to steel itself for the still-uncertain second half of 2022 and beyond.

Congratulations finally to all the ICTA and CineEurope award winners, as well as to UNIC and the organisers for this year’s event (Film Expo Group). It was never going to be easy, so we are all happy it went as well as it did. (Is there any more of that leftover Paella?) 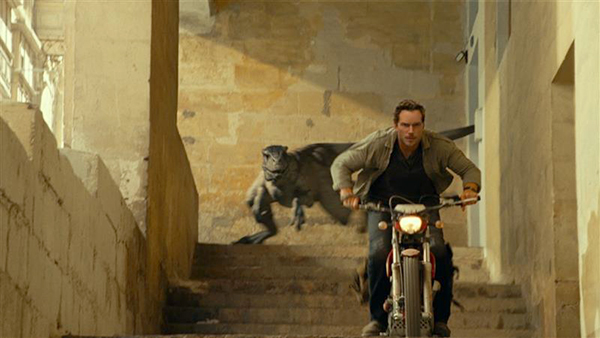 Listen in on this conversation with director Colin Trevorrow and his sound team, to discuss how they crafted the soundtrack to this latest dinosaur Summer blockbuster.explains the benefits of using Atmos.