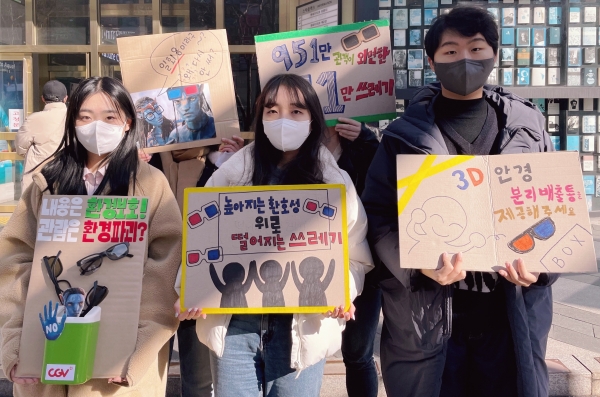 Youth eco activists have been protesting outside cinemas in Korea against the plastic waste of disposable 3D eyewear. An unintended side-effect of the popularity of “Avatar: the Way of Water” has been that a large number of polarised glasses for 3D shows that have been discarded, according to the protestors. This sits badly with a film that has a pro-conservation and environmental message at its heart.

According to KOBIS ticketing statistics, a total of 3.11 million spectators in Korea have watched the Avatar sequel as of 17 January. The film has topped the box office chart in the country for its first four weeks of release and 51% of admissions are estimated to have been for premium formats. According to Insight Korea, “most of the disposable 3D glasses they used were discarded as garbage.” This has led to a mobilisation of protests, particularly by Korean youth:

Lee Hae-wan (25), CEO of YYET, a youth council for responding to the climate crisis of Ecomom Korea, said, “I wanted to let many people know that as much as we enjoy watching movies, 3D glasses turn into a huge amount of plastic waste and are thrown away.” He emphasized that being interested in and continuously giving voice to cinemas is the greatest force that can lead to change.”

One 15-year old protester was quoted as saying, “I was watching ‘Avatar 2’ with my friends, but when I saw the notice saying to throw away the 3D glasses in a container, I thought it was too much of a waste.” Ha Ji-won, CEO of Ecomom Korea has written to all three of Korea’s big cinema chains: CGV, Lotte and Megabox, demanding that they address the issue of disposable 3D eyewear. “Since cinemas are an important cultural space for the lives of the entire nation, especially future generations, I hope that they devise sincere and responsible alternatives,” he is quoted as saying.