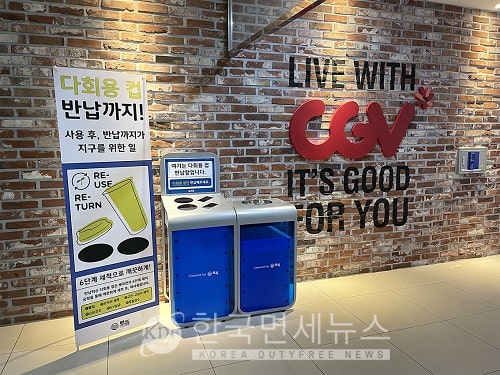 During the pilot, customers will buy soda and other cold beverages in reusable cups instead of disposable ones. These can then be returned to a receptacle where they are collected, washed, and re-supplied to the cinema. In its efforts to embrace and communicate sustainability, CJ CGV is also switching popcorn tubs to eco-friendly materials in ten cinemas nationwide and then to all of its Korean cinemas within a year:

CJ CGV added a theater with multi-use cups that were pilot-introduced in CGV Deungchon and Hongdae last year.

Similar efforts are underway by Lotte, which is looking at everything from offering milk substitution for its coffee drinks to switching to paper straws. Pilot partner Podeuk is already providing multi-use cup rental/washing services to Korean companies such as Kookmin Card, as well as cinema locations such as Lotte Cinema Pyeongchon and Konkuk University as of last year. The company is also responsible for washing multi-use cups in another pilot project in Seoul, in which Starbucks is participating.