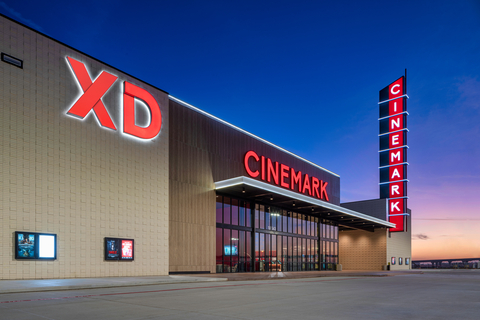 Cinemark, one of the world’s largest cinema chains, is touting its latest theatre opening with the Cinemark Missouri City and XD in southwest Houston. The 14-screen theatre is the first to showcase a reimagined design and features first-class amenities including two XD auditoriums and luxury recliners.

The new theatre is the first to fully reflect Cinemark’s updated brand, which forges a new look, feel and tone. The refreshed appearance is reflected throughout various customer touchpoints in the theatre including interior signage, employee uniforms and food and beverage vessels. Cinemark says the updated interior layout of the theatre that was carefully constructed based on extensive psychological research.

What exactly does that mean. Well, Wanda Gierhart Fearing, Cinemark Chief Marketing and Content Officer, explained that, “Everything from the ticket kiosks to the concession stand layout, to the colors of the décor has been carefully chosen in order to create a cinematic moment that extends beyond just the story on the screen.”