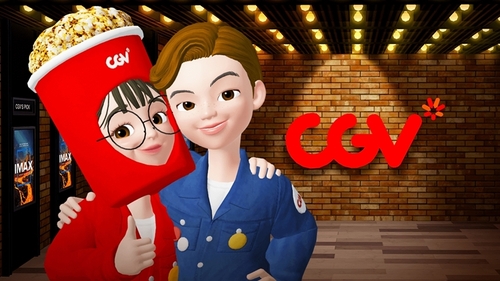 South Korea’s CJ CGV has become the first cinema chain to open a cinema in the Metaverse. The Zepeto CGV World opened on 28 January and virtual visitors will find an entire multiplex, including a lobby with a box office, a concession stand, a photo zone, and a theatre auditorium with different seats. In the instructional video, virtual patrons are shown how they pick a movie in the lobby, print out a virtual movie ticket, buy popcorn and drinks from a kiosk.

Inside the auditorium patrons can watch trailers on a 1.43:1 ratio screen, modelled on the CGV Yongsan Park Mall IMAX. There are also screenings of user-generated content (UGC), which won first and second prizes in the recently held “Make Your Own Movie” contest. There are no showings of full-length feature films. Patrons can also chose between different types of seats, including ‘Sweet Cinema’ modelled after a hotel suite, ‘Tempur Cinema’, a bed cinema, ‘Cine & Foret’ with the theme of nature in the city, and 4DX, the motion seat with movement, water spray, air and fragrances.

Commenting on the opening, CGV said, “We have opened a virtual cinema to establish a new contact point with customers and provide a differentiated theater experience.” CGV has pushed the boundaries on many cinema innovations, from the 4DX and ScreenX immersive formats, to experimenting with enhanced service offerings and food and beverage items. Korean rival conglomerate Lotte announced in January that it is expanding its retail offerings in the Metaverse, including plans for cinemas and concert halls. Virtual cinemas already have an established tradition, with the trailer for “Star Wars: the Rise of Skywalker” premiering in Fortnite in 2019.